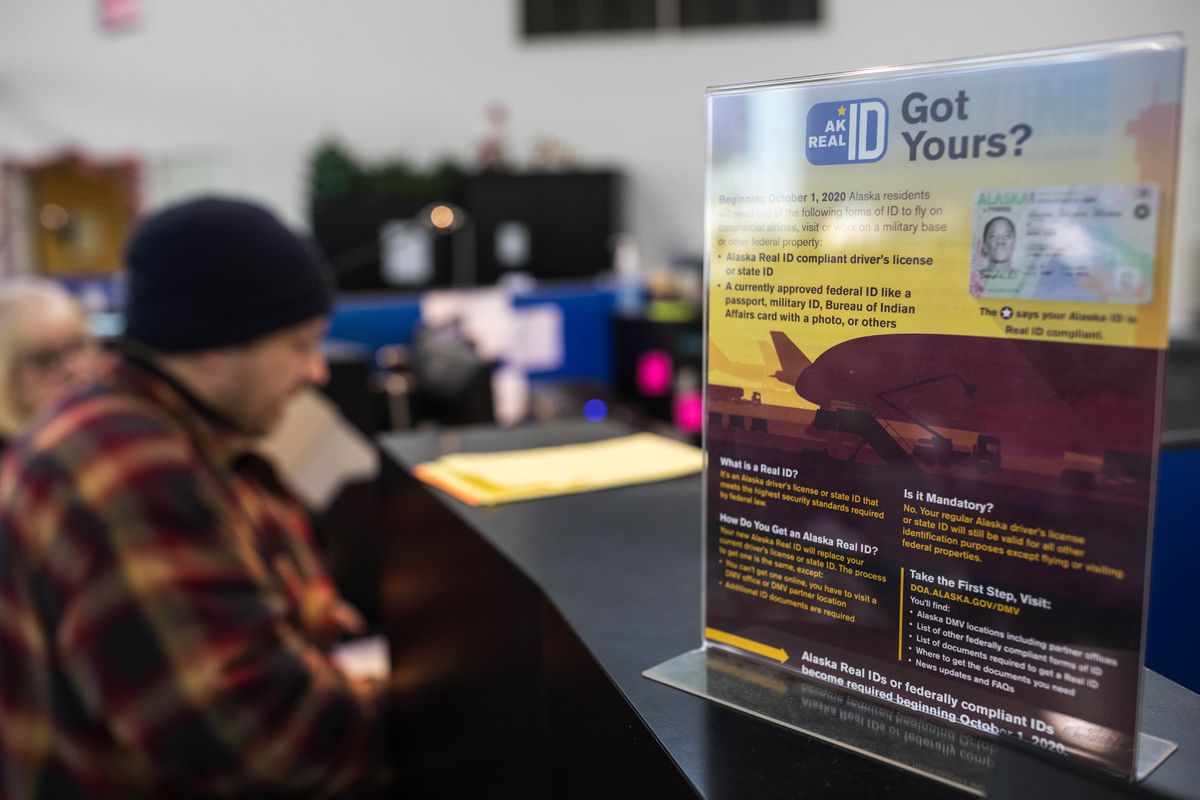 A poster informs people of the availability of the Alaska Real ID, on Wednesday, Jan. 2, 2019 at the Anchorage DMV office. (Loren Holmes / ADN)

A poster informs people of the availability of the Alaska Real ID, on Wednesday, Jan. 2, 2019 at the Anchorage DMV office. (Loren Holmes / ADN)

There are things more frustrating than dealing with government, but I truly have no idea what they might be. A case in point: Real ID.

Set to go into effect Oct. 1, 2020, the last phase of the Real ID Act of 2005 requires a Real ID-compliant driver’s license or another acceptable form of identification, such as a passport, before flying aboard a domestic commercial airliner or entering a federal facility or military base.

Getting a Real ID seems so fetchingly simple. You go to the Department of Motor Vehicles and get one. I wish.

You have to prove who you are beyond a shadow of doubt, and who knew that could be such a pain in the patoot. After all, as the great American philosopher Popeye once said, “I yam what I yam.” But that, apparently, is far from good enough.

Over the years, I have had security clearances, permits and licenses that required multiple federal and state background checks. Neighbors interviewed. Employers grilled. Friends questioned. The government knows me as well as my proctologist.

Nonetheless, a passport and/or Real ID is good to have if you plan to travel by air after late next year. You never know, after all, if Alaska’s ferries will be running or if Canada will let you pass through by vehicle. I have a passport, but decided to get a Real ID because, well, you never know. Gathering documents to apply is a pain in, and of, itself. The DMV chart of what you need is helpful, but keep the blood pressure pills handy.

First, you must provide proof of your identity and birth date. Sounds easy enough, until: Where is my passport? Anybody seen my birth certificate? My filing skills are limited to stacking, and not neatly. I found myself rifling through reams of scrunched-up paperwork in dusty boxes untouched for years. Hey, look, a birthday card from 1984. Hey, my sixth-grade report card (mostly Bs). Oh, and a warranty card for an 8-track cassette player.

I jammed all the documents into a folder and headed to the main DMV office. I made it just inside the door. A nice lady asked why I was there. When I told her, she asked to see my papers. It took her maybe three seconds to spot a problem.

“Your Social Security card does not agree with your passport and birth certificate,” she told me.

Whaaa? Are you sure? They’re pals, they’ve always agreed in the past. I chuckled. Stupid.

The room suddenly was very hot. Whatever do you mean? I asked. You have to get another Social Security card, she said. “Nooooooo!” I wailed. Anything but the Social Security office. Please, please, please. Can’t we just draw a “II” behind my name? I’m the same guy, with a “II” or without. I swear. I have a passport. A driver’s license. A birth certificate. I yam what I yam. Who cares about one little “II”?

We do, she said, smiling.

On the first trip to the Social Security office it took 20 minutes to find a parking place (and curse you old lady hogging two spots nearby). Then, I was busted at the door because I was carrying — gasp! — a pocket knife. How about I leave it with you guys and pick it up on the way out? Nope, they said, shooing me out.

On my second try days later, I made it in after something just shy of a strip search and took a number. And waited. After two hours or so — and aren’t screaming babies and angry, frustrated people just delightful — it was time to fix the 60-year-old error. Armed with my passport, driver’s license, birth certificate, proof of residence and my incorrect Social Security card, I made it to Window No. 1, where a delightful young lady ordered me a new card. Just like that. It took a minute. She said it would be along in two weeks.

That was just a few days ago. When the new card arrives, and with the Great Suffix Problem resolved, it will be time to return with matching documents to the DMV for Round Two.

I can hardly wait. I yam what I yam and I’ve got papers to prove it.