If this is the best defense Dunleavy supporters can muster, he’s in real trouble 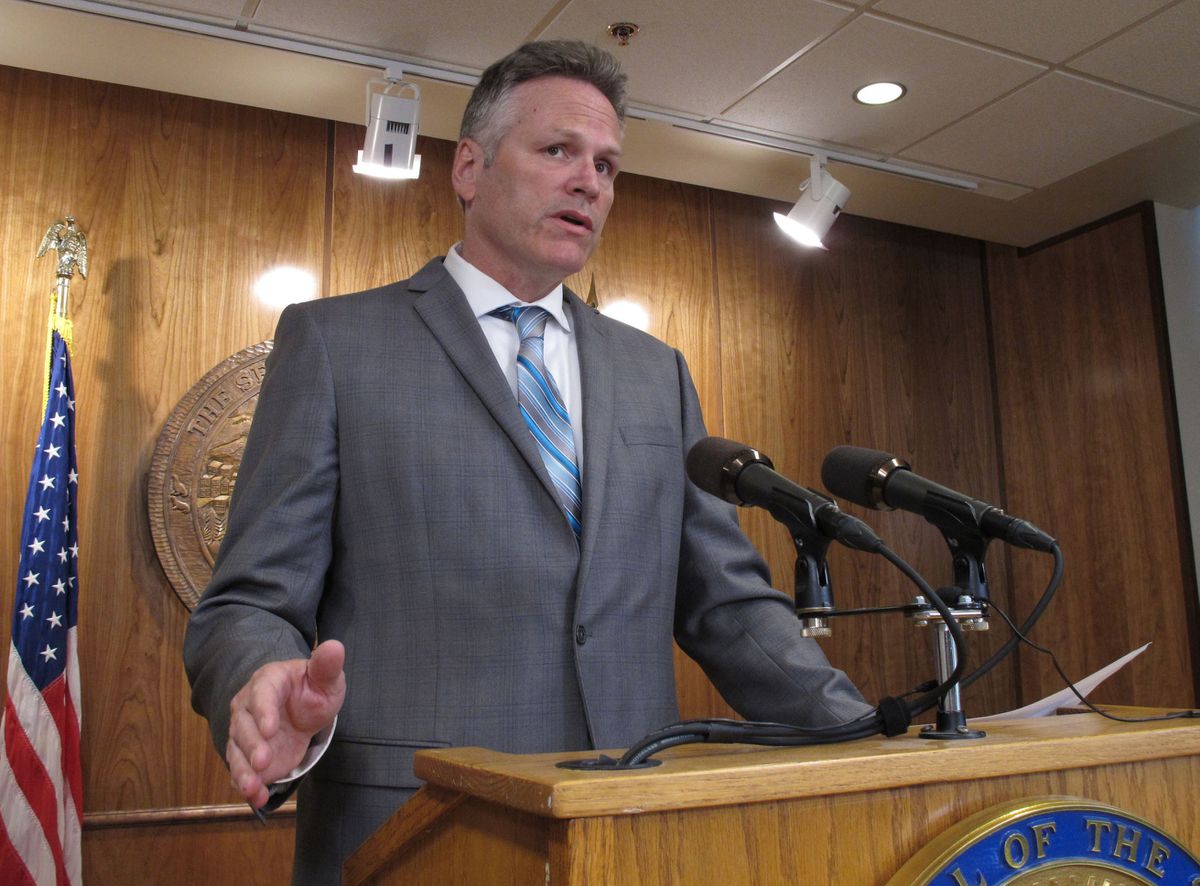 FILE - In this June 28, 2019 file photo Alaska Gov. Mike Dunleavy speaks to reporters about his budget vetoes at the state Capitol in Juneau, Alaska. A group that includes a coal company chairman and a framer of Alaska's constitution is launching an effort to recall Dunleavy. The National Conference of State Legislatures says, across the country, there have been many attempts over the years to recall governors but very few have gone far enough to trigger recall elections. (AP Photo/Becky Bohrer, File)

FILE - In this June 28, 2019 file photo Alaska Gov. Mike Dunleavy speaks to reporters about his budget vetoes at the state Capitol in Juneau, Alaska. A group that includes a coal company chairman and a framer of Alaska's constitution is launching an effort to recall Dunleavy. The National Conference of State Legislatures says, across the country, there have been many attempts over the years to recall governors but very few have gone far enough to trigger recall elections. (AP Photo/Becky Bohrer, File)

Craig Richards’ Oct. 31 opinion piece, “Recall effort against Dunleavy is misguided,” makes the governor’s case against the recall. But Richards, a former attorney general who went to a top law school (Duke University), wrote carelessly, as if in a hurry, and was unpersuasive.

First, he said there are no grounds for the recall — only a “hodgepodge of accusations” cooked up by Alaskans attempting to overturn the 2018 election. In a surprise to nobody, the state Division of Elections, a branch of the Dunleavy administration, agreed with him and rejected the recall petition Monday.

A court will decide whether there is a legal basis for the recall to continue.

There is limited legal history of recall in Alaska — recall is rare — but enough precedent to suggest the recall can proceed after the blessing of a neutral court. When disenchanted Alaskans sought to recall Wally Hickel and Jack Coghill in the 1990s, a Fairbanks judge who examined their petition said Coghill’s admission that he had never read the election statutes met the standard for recall. Coghill, as lieutenant governor, was formally in charge of elections. The bar for allowing a recall on the ballot is evidently legally low.

Second, Richards argued at length that Alaska does not have the money to continue spending as in the past. This is the same argument Gov. Mike Dunleavy made as a candidate, and is his justification for the reckless cuts he made in the 2020 budget.

Richards wrote, “The fiscal decisions required to keep the from going over the cliff will not be what I - or anyone else - wants. It will be a compromise, and it will be hard. Individual Alaskans, government agencies, and businesses large and small will be significantly affected.”

Richards’ plodding prose featured a tired metaphor (“going over the cliff”), an undefined abstraction (that “compromise”), a cliché that can be used to describe anything from cutting the budget to winning the World Series or swimming the English Channel (“it will be hard") and a vague passive-voice assertion (”will be affected" — no kidding, state employees who lose their job “will be affected.”).

Richards lacked any specificity, making him rather like the old football coach who hectored the players with, “When the going gets tough, the tough get going.” Alaskans face a challenging situation; they better get moving. But where?

Tired metaphor, undefined abstraction, cliche, vague passive voice; all avoid reality. The reality is a ferry service impaired in Southeast and Southwest Alaska, the University of Alaska dismantled, opportunities for medical care withdrawn from thousands of Alaskans by Medicaid cuts.

Gov. Dunleavy is damaging Alaskans’ lives and is incapable of showing compassion, empathy for the people he is hurting. He is heartless. And his inability to demonstrate concern for his fellow Alaskans and inarticulate explanation of his behavior has produced the white heat of the recall.

In reflecting on himself before a Republican audience, Dunleavy said, “I think I induce stress in others, to be honest with you.” Who else would admit that and apparently make no effort to alter his behavior?