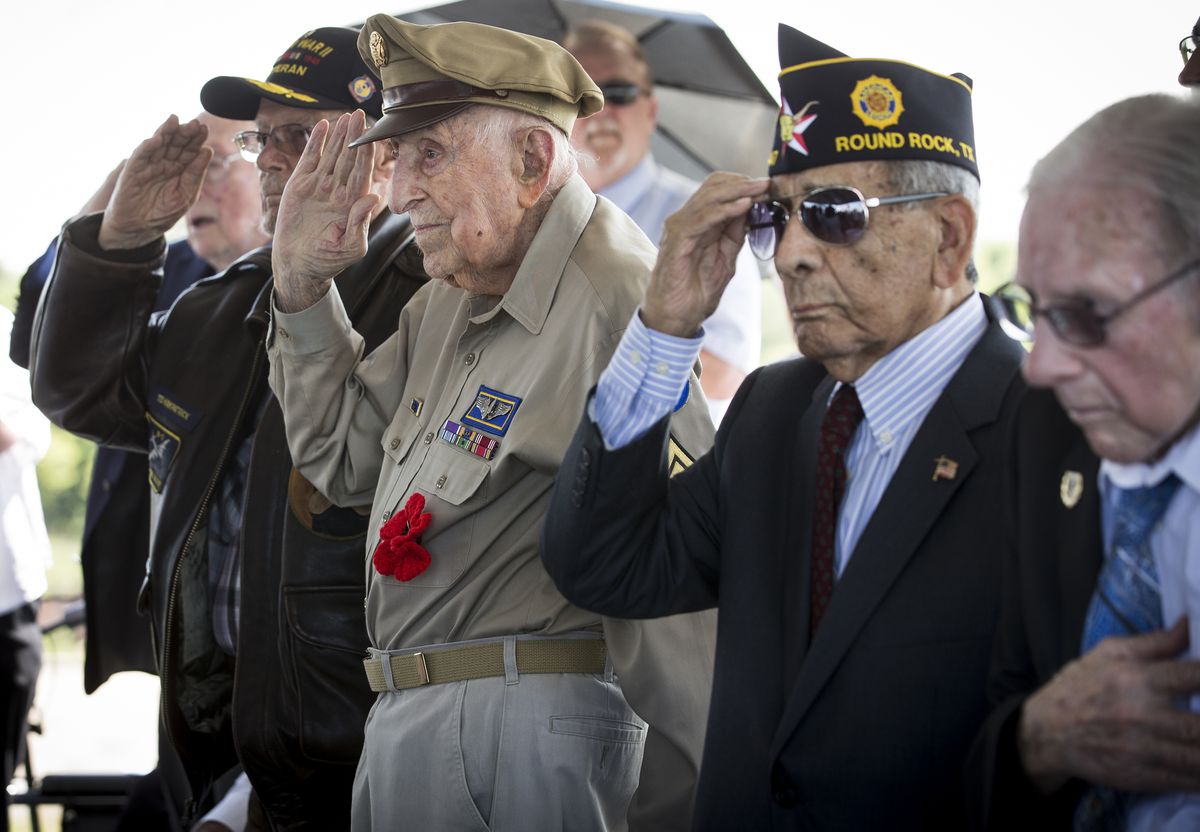 D-Day veterans, from left, Teddy Kirkpatrick, Achilles Kozakis and Robert Sanchez salute during a ceremony aboard the Battleship Texas on Thursday, June 6, 2019, in La Porte, Texas. The U.S.S. Texas was part of the D-Day operations in Normandy and is the last remaining battleship to have served during the invasion. The veterans were all awarded the French Legion of Honor for their service in the liberation of France. (Brett Coomer/Houston Chronicle via AP)

D-Day veterans, from left, Teddy Kirkpatrick, Achilles Kozakis and Robert Sanchez salute during a ceremony aboard the Battleship Texas on Thursday, June 6, 2019, in La Porte, Texas. The U.S.S. Texas was part of the D-Day operations in Normandy and is the last remaining battleship to have served during the invasion. The veterans were all awarded the French Legion of Honor for their service in the liberation of France. (Brett Coomer/Houston Chronicle via AP)

As the weather has gradually grown colder and we come to approach this Veterans Day, we come together in support of one another, to honor one another and to give a “Welcome Home” to one another.

For those of us who have served, it is time to remind ourselves to remember those who paid the ultimate price for our freedoms. Though for many of us, we carry those thoughts in the deep recesses of our soul for a lifetime, Veterans Day is a day for reconciliation, a day that we come together to collectively honor those who have served and are still serving our great nation.

Since our nation’s founding, America’s sons and daughters have given their lives in service to our country. From Gettysburg to Normandy, from Inchon and Khe Sanh, from Baghdad to Kandahar, they departed our world as heroes and gave their lives for a cause greater than themselves.

We cherish their memory and give thought to the lives they once shared with us. We mourn with the families and friends of those we have lost, and hope they find comfort in knowing their loved ones died with honor.

Francis A. Walker, a Civil War veteran, was quoted: “We come, not to mourn our dead soldiers, but to praise them."

It is our sacred duty to preserve the legacy of these brave Americans, and it remains our charge to work for peace, freedom, and security. Let us always strive to uphold the founding principles they died defending; let their legacy continue to inspire our nation; and let this solemn lesson of service and sacrifice be taught to future generations of Americans.

When we returned from Vietnam, we had no parades, no accolades and no “Wounded Warrior Program." We just moved forward without a defined support network. We had no need to be “reminded” of our service, we had each other and we had “The Wall” as our touchstone, where 58,000 names are etched in simple black granite as a reminder of the cost of freedom for just one generation. It is our emotional “welcome home.” Though our generation was ostracized for our efforts on behalf of freedom, we said to ourselves that "Never again shall one generation of warriors forget another.” So we in turn celebrate our veterans, not only of our generation but those who sacrificed from many wars past and those that continue to sacrifice for the cause of freedom. As veterans, we do this out of mutual respect and admiration for service and sacrifice rendered, one warrior to another.

A quote from the movie “Four Feathers”: “The soldier’s greatest comfort is to have his friends close at hand. In the heat of battle, it ceases to be an idea or a flag for which we fight. Rather, we fight for the man on our right or left. When the years fall away, all that remains are the memories of those precious moments we spent side by side.”

Today, Americans from all backgrounds and corners of our country serve with valor, courage, and distinction in the U.S. Armed Forces. They stand in spirit with those old soldiers of generations past who are an eternal part of our nation’s history, now writing their own chapter of service and sacrifice. Most of today’s warriors know what it means to lose a comrade in arms and friend before their time, as well as all our service members and their families who also truly understand the value of that service and sacrifice.

Veterans Day should be a reminder that the freedoms we so enjoy were paid for at a great price by so many, from the Revolutionary War continuing with today’s war on terror. Thomas Paine, who served with Gen. George Washington, wrote; “These are the times that try men’s souls. The summer soldier and the sunshine patriot will, in crisis, shrink from the service to his country: but he that stands now deserves the love and thanks of all mankind. Tyranny, like Hell, is not easily conquered. Yet we have the consolation with us, that the harder the conflict, the more glorious the triumph.”

He wrote this after Washington’s Army suffered more than 3,000 casualties in two defeats to the British in November 1776.

We ask for God’s grace to protect those fighting in distant lands, and we renew our promise to support our troops, their families and our veterans. Their unwavering devotion inspires us all — they are the best of America. So in turn, we honor our veterans on this Veterans Day and thank them for their selfless sacrifice in preserving the liberty of our country.

Rep. Laddie Shaw, R-Anchorage, is a member of the Alaska House of Representatives.