Gov. Dunleavy is under siege for... governing 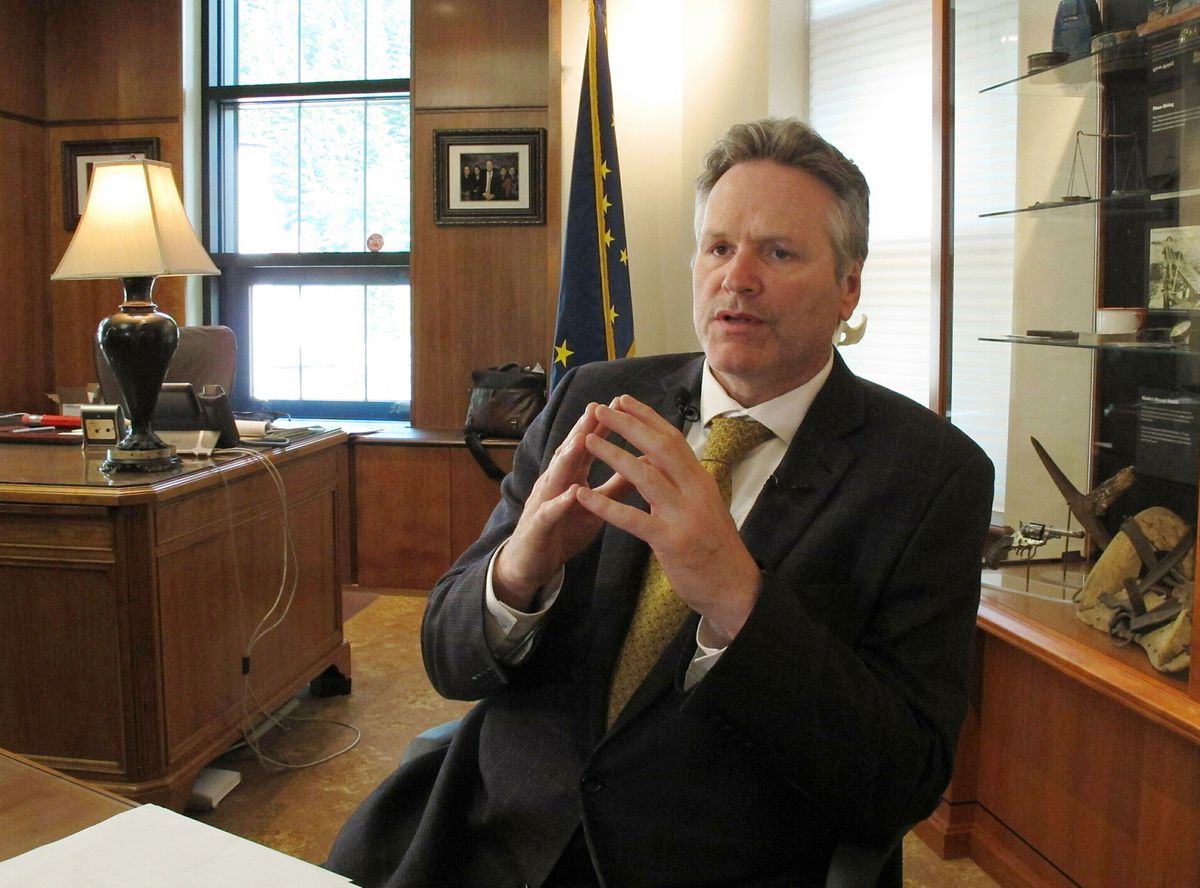 FILE - In this May 29, 2019, file photo, Alaska Gov. Mike Dunleavy speaks to reporters in his office at the state Capitol in Juneau, Alaska. A fight is brewing over whether Dunleavy, a Republican who took office in Dec. 2018, should be recalled. Critics say he’s incompetent and has recklessly tried to cut spending while supporters see a politically motivated attempt to undo the last election. (AP Photo/Becky Bohrer, File)

FILE - In this May 29, 2019, file photo, Alaska Gov. Mike Dunleavy speaks to reporters in his office at the state Capitol in Juneau, Alaska. A fight is brewing over whether Dunleavy, a Republican who took office in Dec. 2018, should be recalled. Critics say he’s incompetent and has recklessly tried to cut spending while supporters see a politically motivated attempt to undo the last election. (AP Photo/Becky Bohrer, File)

In Alaska in 2019, “governing” has meant fiscal seriousness. Everyone knows the story. As the price of oil has fallen, so have tax revenues derived from oil leases. The state’s larger-than-expected budget shortfall is not anyone’s fault, but it is elected officials’ responsibility to deal with it. Like most legislatures — very much including the U.S. Congress — the Alaska Legislature was reluctant to restore fiscal discipline if it meant spending cuts, even though the state’s damaged credit rating demanded it.

And so, Gov. Dunleavy did exactly what he promised to do and exactly what Alaska’s governor — empowered with a line-item veto for this very purpose — is supposed to do: He led. He first worked with the Legislature to find savings. But in politics, no one wants to be proverbial skunk at the garden party. And so, when legislators refused to deal with the budget crisis, Gov. Dunleavy used his line-item veto power to cut spending himself.

Alaska partisans, who launched a campaign to recall Gov. Dunleavy within months of his being sworn into office, used the budget reductions to inflame and co-opt public opinion in support of their politically motivated attempt to nullify the results of the 2018 election.

On Nov. 4, the Division of Elections rejected the recall petition because it failed to meet even the most basic standards required under the law. The recall process is designed to protect the state from corrupt or unfit officials; there is no such case against Gov. Dunleavy. The recall petition does not accuse Dunleavy of malfeasance, just fiscal discipline. Improving the state’s economic climate and plummeting credit rating are not crimes.

As John F. Kennedy famously said, “To govern is to choose.” Too many politicians — in Washington, in Juneau and every elected government around the world — prefer not to choose. They prefer to avoid difficult decisions. They prefer to talk rather than act. They prefer to be like pundits on TV, criticizing other people’s decisions rather than making their own. I served in Congress for 15 years, and I know. With responsibility comes accountability — angry phone calls, rowdy town halls, difficult re-election campaigns. The Founders understood this was a fatal temptation of democracy. That’s why the Constitution they wrote requires the men and women who win elections to take an oath — a solemn promise — to fulfill the duties of their new job.

Gov. Dunleavy used his line-item veto not simply to cut the state’s budget, but to finally draw state legislators toward bipartisan compromise on overdue reforms. His efforts resulted in a significant cut in the state’s budget deficit in one year.

Fiscal discipline, like physical therapy after a necessary surgery, can hurt. But it pays manifold dividends in the long run. In response to Gov. Dunleavy’s budget leadership, the Alaska economy has added jobs, family income is rising quickly and the state’s unemployment rate is falling to historic lows.

The budget crisis presents Alaska with a challenge. Gov. Dunleavy met that challenge with transparency and honesty. While his critics sought to exploit the situation, he worked to solve it. That kind of leadership deserves respect, not recall.

Jim DeMint is a national conservative leader who is the Chairman of the Conservative Partnership Institute. DeMint represented South Carolina in the U.S. House (1999-2005) and U.S. Senate (2005-2013).