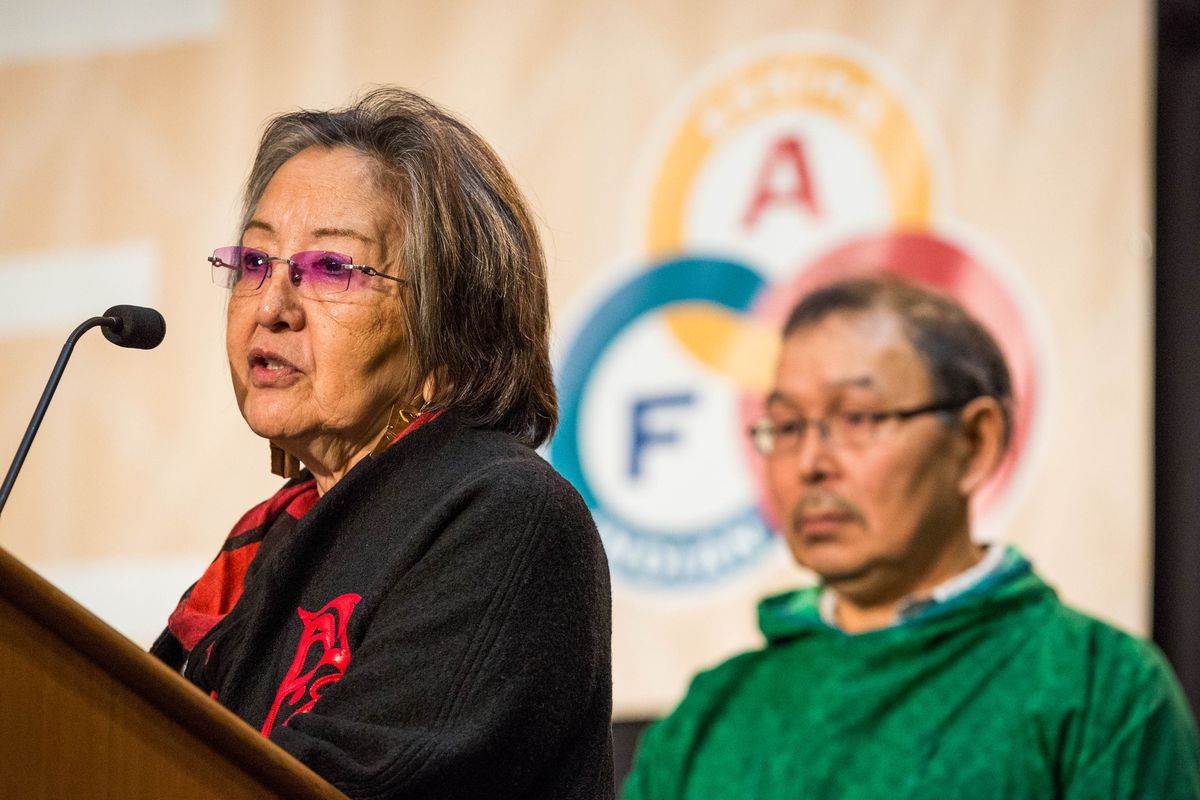 Rosita Worl, left, and Myron Naneng deliver the subsistence committee report to the Alaska Federation of Natives on Friday, October 24, 2014 at the Denaina Civic and Convention Center.

Rosita Worl, left, and Myron Naneng deliver the subsistence committee report to the Alaska Federation of Natives on Friday, October 24, 2014 at the Denaina Civic and Convention Center.

That the Anchorage Daily News and ProPublica found that one-third of Alaska communities lack public safety officers of any kind and that these communities suffer from the highest rates of homicide, domestic violence, sexual assault and suicide in the U.S. is a call to immediate action. It is also evident from the reporting that solutions — beyond the allocation of sufficient funds for rural communities to hire law enforcement officials — are also imperative. With the absence of qualified or available candidates to serve as police officers in a number of the rural communities, an innovative approach must be developed. The model for hiring industrial workers from larger communities to work in remote areas for periodic on/off work schedules could be applied in the interim to the immediate placement of police officers in the rural communities that are not able to retain qualified police officers. The absence of law enforcement officers in at least 70 Alaskan communities warrants immediate action.

Although the Alaska Supreme Court found in 2005 that the lack of public safety officers in rural Alaska was not based on racial bias, reporting by the Anchorage Daily News and ProPublica clearly demonstrates an inequitable justice system between urban and rural communities. The governor and the Legislature must address the two-tiered criminal justice system that leaves villagers unprotected compared with their mostly white counterparts in the cities and suburbs.

Public safety is a basic human right. The United Nations Declaration on the Rights of Indigenous Peoples can provide state elected officials a guide and recommendations to address the basic human rights of Alaska Natives and the inequities that exist in law enforcement and address long-term solutions related to these historical wrongs.

For the long-term solutions to address the realities that we are currently experiencing in law enforcement in many rural communities, the context of historical trauma must be considered. Native peoples were shipped to boarding schools, where they often suffered physical and sexual abuse. They were punished for speaking their Native languages, and the Native way of life was suppressed. Studies have clearly shown that the underlying causes of the devastating health and social problems, including substance abuse, suicide and domestic violence that Natives suffer at a high rate, are rooted in intergenerational trauma.

The Alaska Federation of Natives adopted a resolution at their 2019 convention that proposes to address childhood and historical trauma. The resolution calls on Congress to enact and fully fund comprehensive legislation that will provide the resources needed to create and implement comprehensive, integrated, trauma-informed initiatives. The state Legislature should adopt the same resolution and implemented by the state government.

To be successful, both immediate and long-term solutions should be developed in consultation with the Native community.