Allowing jet skis in Kachemak Bay is a terrible idea. But that doesn’t matter to Gov. Dunleavy. 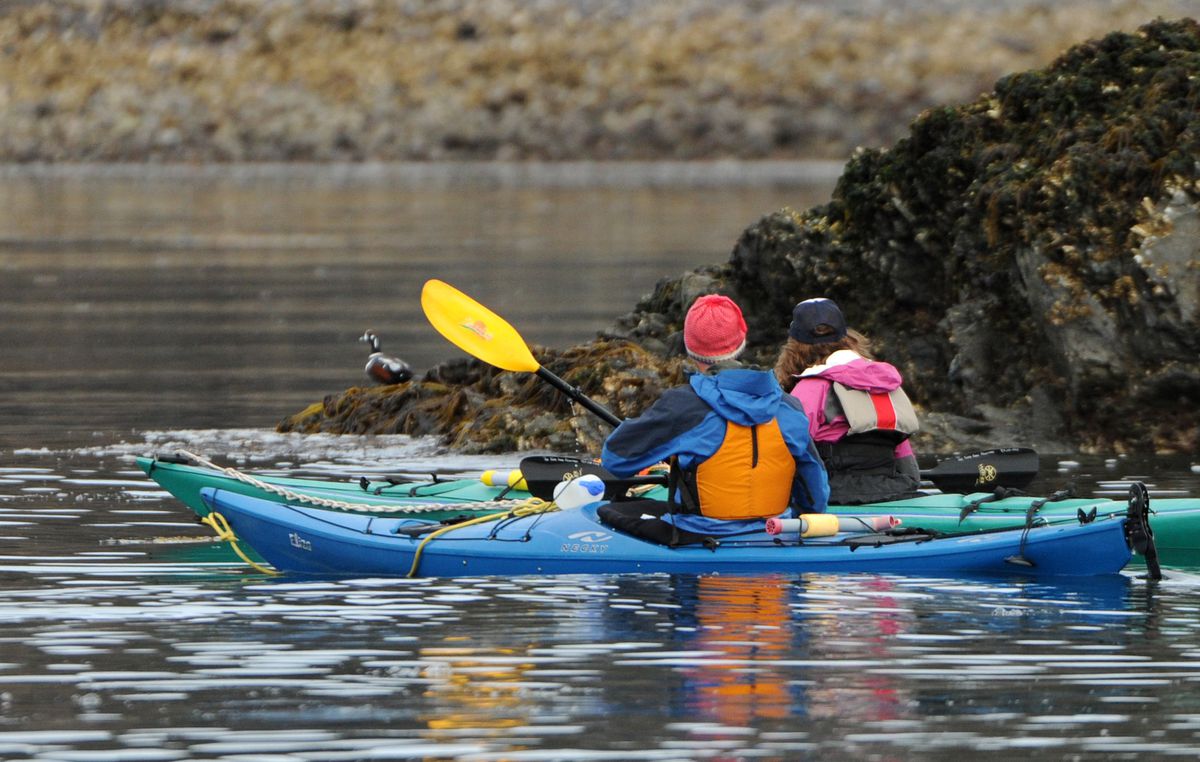 Kayakers, on a True North Kayak Adventures tour near Elephant Rock across Kachemak Bay from the Homer Spit, paddle by a duck on May 10, 2013, the second day of the Homer Shorebird Festival. (Bob Hallinen/ADN)

Kayakers, on a True North Kayak Adventures tour near Elephant Rock across Kachemak Bay from the Homer Spit, paddle by a duck on May 10, 2013, the second day of the Homer Shorebird Festival. (Bob Hallinen/ADN)

Personal watercraft — jet skis — have been banned from Kachemak Bay since 2001. The Dunleavy administration wants to undo the ban.

Kachemak Bay is a large estuary that supports millions of waterfowl, shorebirds, seabirds and marine mammals and abundant populations of fish, shellfish and other marine life. It was designated “critical habitat” by the Legislature in 1974 to protect those resources and to restrict all human uses incompatible with that goal.

Rick Green, the guy in charge of gathering comments on the governor’s plan to allow personal watercraft, or PWC, in Kachemak Bay, doesn’t care how many people are opposed to the idea.

“I don’t know that numbers (of comments),” Green admitted on a radio show, “are the main driving force.”

Green, better known as Rick Rydell from his radio talk show days, is the least-qualified person at the Department of Fish and Game to make that call. He has no education, training, experience or aptitude to be a biologist. But he is a good friend of the president of the Personal Watercraft Club of Alaska and a life member of the Alaska Outdoor Council, an advocacy group that includes the PWCA. It’s all very incestuous, politically speaking.

The PWCA’s website claims that “The ban was put in place based on questionable ‘studies’ that had no scientific basis.” Incorrect.

True, there weren’t many studies available in 2001. But the area’s managers should be congratulated for being proactive. More than a dozen studies on the adverse effects of PWCs have been published since then. All boats are capable of disturbing wildlife, but jet skis are especially problematic because they tend to be operated erratically at higher speeds, generate different and cumulatively more disturbing noises, and perform loop-de-loops in shallower, near-shore waters and protected bays where wildlife are concentrated.

A recent analysis published in the scientific journal Marine Policy found jet-skiing had the highest potential for impact compared with 15 other recreational and scientific activities in 91 marine reserves in 36 countries.

Jet skis tend to increase traffic in areas with historically low levels of human use. A study in Florida found that jet ski operators are more likely than others to blatantly disregard boating regulations. Another found that, while people operating jet skis seldom have problems with other users, those users — particularly anglers — experience lots of problems with jet skis.

Most boats in Kachemak Bay are fishing vessels. They often don’t move very fast. Moving fast — at top speeds in excess of 60 mph — is the whole reason for jet skis. The operator’s manual for a Kawasaki Ultra 150 recommends leaving 348 feet to come to a stop and, because it has no rudder, that means the operator is not in control.

In 1998, the CEO of the largest independent manufacturer of power boats in the world claimed that PWCs were giving other boats a bad name. Irwin Jacobs believed that “when in use (PWCs) do not, by design or practice, follow the rules of navigation.” Thus, he argued, “PWCs belong in their own special recreational product category, like snowmobiles and all-terrain vehicles.”

Do we regulate snow machines and ATVs differently than cars and trucks? Of course we do. Especially in critical habitat areas.

In Green’s skewed perspective, the handful of people who want to ride PWCs in Kachemak Bay have a stronger claim than all the animals and people who depend on the marine estuary for survival.

It’s not about “equal access,” as Green claims. People who own PWCs have the same right of access to Kachemak Bay as anyone else. They just aren’t allowed to ride their jet skis.

Public comments must be submitted to Green by Jan. 21. But don’t bother. He and the governor have already decided the fate of Kachemak Bay.