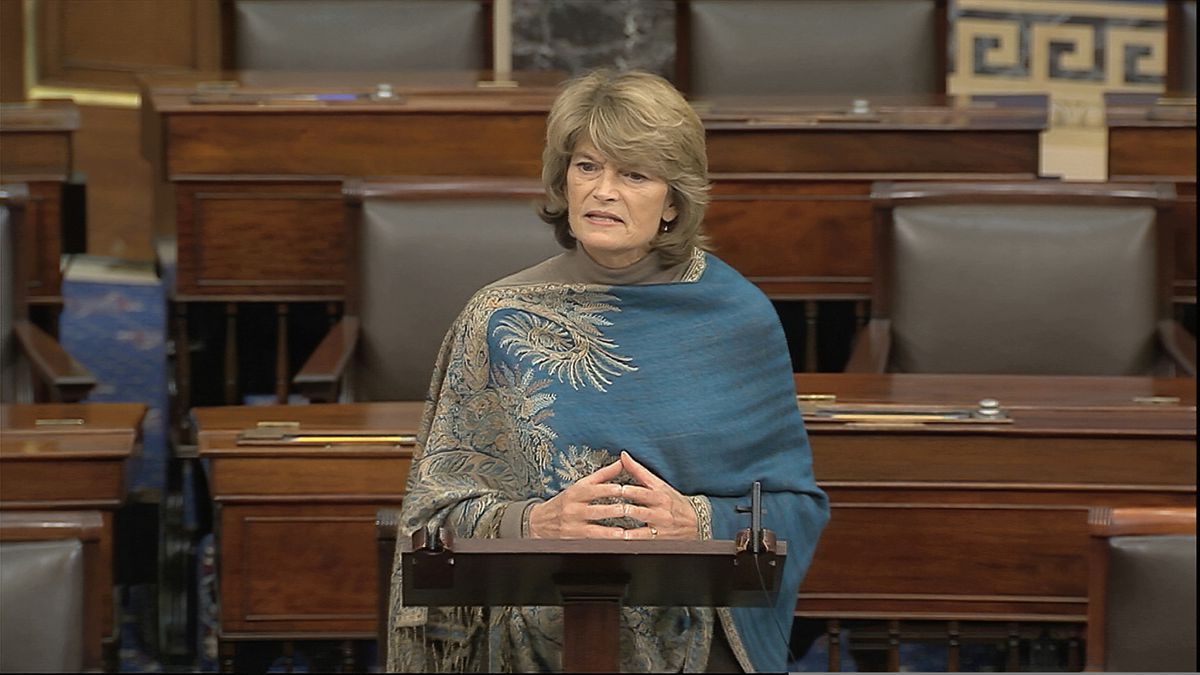 In this image from video, Sen. Lisa Murkowski, R-Alaska, speaks on the Senate floor about the impeachment trial against President Donald Trump at the U.S. Capitol in Washington, Monday, Feb. 3, 2020. The Senate will vote on the Articles of Impeachment on Wednesday afternoon. (Senate Television via AP)

In this image from video, Sen. Lisa Murkowski, R-Alaska, speaks on the Senate floor about the impeachment trial against President Donald Trump at the U.S. Capitol in Washington, Monday, Feb. 3, 2020. The Senate will vote on the Articles of Impeachment on Wednesday afternoon. (Senate Television via AP)

Editor’s note: The following is a transcript of Sen. Lisa Murkowski’s remarks on the Senate floor Monday, Feb. 3, 2020. The text was provided by her office.

I rise to address the trial of Donald John Trump. The founders gave this body the sole power to try all impeachments, and exercising that power is a weighty responsibility.

This was only the third time in the history of our country that the Senate convened to handle a presidential impeachment, and only the second in the past 150 years. I was part of a small group that worked to secure a fair, honest and transparent structure for the trial, based on how this chamber handled the trial of President Clinton. Twenty-four hours of arguments for each side, 16 hours of questions from members, with the full House record admitted as evidence, should have been more than enough to answer the questions: Do we need to hear more? Should there be additional process?

The structure we built should have been sufficient, but the foundation upon which it rested was rotten.

The House rushed through what should be one of the most serious, consequential undertakings of the legislative branch simply to meet an artificial, self-imposed deadline. Prior presidential impeachments resulted from years of investigations, where subpoenas were issued and litigated. Where there were massive amounts of documents produced and witnesses deposed. Where resistance from the executive was overcome through court proceedings and accommodations.

The House failed in its responsibilities. And the Senate should be ashamed by the rank partisanship that has been on display. We cannot be the greatest deliberative body when we kick things off by issuing letters to the media instead of coming together to set the parameters of the trial and negotiate in good faith how we should proceed. For all the talk of impartiality, it is clear that few in this chamber approached this with a genuinely open mind. Some have been calling for this President to be impeached for years. Others saw little need to even consider the arguments before stating their intentions to acquit.

Over the course of the past few weeks, we have all seen videos from 20 years ago, where members who were present during the Clinton trial took the exact opposite stance than they take today. That level of hypocrisy is astounding, even for (Washington) D.C.

The President’s behavior was shameful and wrong. His personal interests do not take precedence over those of this great nation. The President has the responsibility to uphold the integrity and honor of the office. Not just for himself but for all future presidents. Degrading the office, by actions or even name calling, weakens it for future presidents and weakens our country.

All of this rotted the foundation of the process, and this was why I reached the conclusion that there would be no fair trial. While the trial was held in the Senate, it was litigated in the court of public opinion.

For half the country, there had already been far too much process. They consider the entire impeachment inquiry to be baseless, and thought the Senate should have dismissed the case as soon as it reached us. For the other half, no matter how many witnesses were summoned or deposed, no matter how many documents were produced, the only way the trial would have been considered “fair” was if it resulted in the President’s removal from office.

During the month that the House declined to transmit the articles to the Senate, the demon of faction extended his scepter, the outcome became clear, and a careless media cheerfully tried to put out the fires with gasoline. We debated witnesses instead of the case before the Senate. Rather than the President’s conduct, the focus turned to how a lack of additional witnesses could be used to undermine any final conclusion.

What started with political initiatives that degraded the Office of the President and left the Congress wallowing in partisan mud, threatened to drag the last remaining branch down along with us. I have taken tough votes before to uphold the integrity of our courts. And when it became clear that a tie vote in the Senate would simply be used to burn down our third branch of government for partisan political purposes, I said — enough.

The response to the President’s behavior is not to disenfranchise nearly 63 million Americans and remove him from the ballot. The House could have pursued censure, not immediately jumped to the remedy of last resort. I cannot vote to convict. The Constitution provides for impeachment, but does not demand it in all instances. An incremental first step, to remind the President that, as Montesquieu said, “Political virtue is a renunciation of oneself” and this requires “a continuous preference of the public interest over one’s own.” Removal from office, and being barred from ever holding another office of honor, trust, or profit under the United States is the political death penalty. The President’s name is on ballots that have already been cast. The voters will pronounce a verdict in nine months, and we must trust their judgment.

This process has been the apotheosis of the problem of Congressional abdication. Through the refusal to exercise war powers, or relinquishing the power of the purse, selective oversight, and an unwillingness to check emergency declarations designed to skirt Congress – we have failed time and time again. We cannot continue to cede authority to the executive.

The question that must be answered, given the intense polarization in our country, is where do we go from here? Sadly, I have no definitive answers. But I do have hope – because I must have hope. As I tried to build consensus over the past few weeks, I had many private conversations with my colleagues. Many share my sadness for the state of our institutions. It is my hope that we have found the bottom. That both sides can look inward and reflect on the apparent willingness each has to destroy not just each other, but all of the institutions of our government. And for what? Because it may help win an election?

At some point – for our country – winning has to be about more than just winning – or we will all lose.