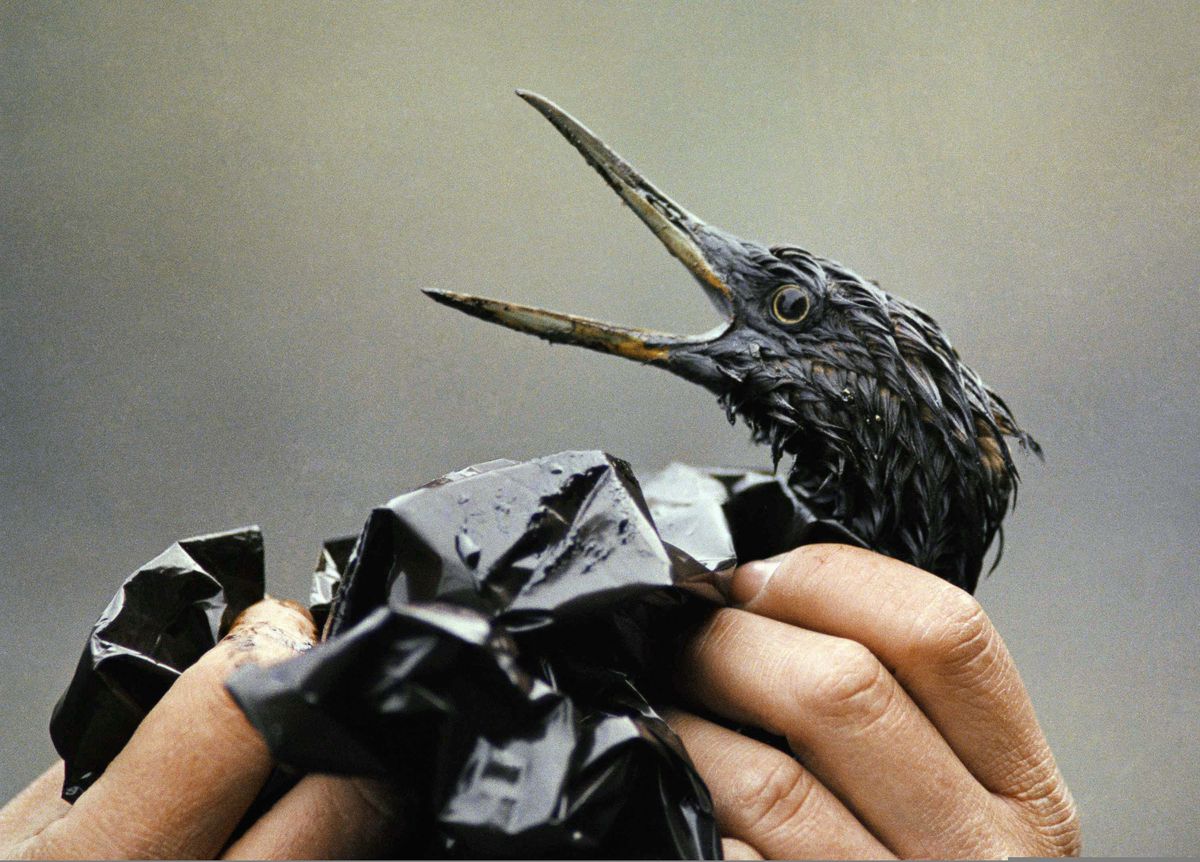 FILE - In this April 1989, file photo, an oil-covered bird is examined on an island in Prince William Sound, Alaska, after the Exxon Valdez spill. Thirty years after the supertanker Exxon Valdez hit a reef and spilled about 11 million gallons of oil in Prince William Sound, the state of Alaska is looking whether to change its requirements for oil spill prevention and response plans, a move that one conservationist says could lead to a watering down of environmental regulations. (AP Photo/Jack Smith, File)

FILE - In this April 1989, file photo, an oil-covered bird is examined on an island in Prince William Sound, Alaska, after the Exxon Valdez spill. Thirty years after the supertanker Exxon Valdez hit a reef and spilled about 11 million gallons of oil in Prince William Sound, the state of Alaska is looking whether to change its requirements for oil spill prevention and response plans, a move that one conservationist says could lead to a watering down of environmental regulations. (AP Photo/Jack Smith, File)

In 1971, the Alaska Legislature formed the Department of Environmental Conservation to take the lead on Alaska’s environmental protections. DEC’s mission, set by the legislation which formed it, is conserving, improving and protecting Alaska’s natural resources and environment to enhance the health, safety, economic and social well-being of Alaskans.

Now, here we are, 30-plus years after the Exxon Valdez oil spill and the creation of regional citizens advisory councils in Alaska, and coming up on 30 years since the passage of the Oil Pollution Act of 1990. The world-class oil spill prevention and response system in Prince William Sound is a direct result of post-Exxon Valdez spill laws and regulations designed to protect Alaska. These strong statutes and regulations are one of the main reasons why Prince William Sound has not had a major oil spill since.

Currently, DEC is undertaking a “scoping process,” asking for comments from industry and the public on oil spill prevention and response regulations and statutes, which the DEC Commissioner has stated have become “onerous and burdensome” to business. The deadline to comment, March 16, is fast approaching.

Prince William Sound Regional Citizens’ Advisory Council has concerns that the current review is an effort to roll back regulations in order to reduce the burden on the oil industry, effectively shifting that burden to the citizens and the environment of Alaska.

The Spill Prevention and Response division of DEC is also suffering from reduced funding, which will become critical by 2024 without a solution. Currently, this could hamper an efficient and timely review of comments from this scoping. In the future, this shortfall would be disastrous to oil spill prevention and response programs for Alaska.

Contingency plans, required by statutes and regulations, serve as a contract between industry and the state. They are an insurance policy to the citizens that their interests are being protected in both spill prevention and response preparedness. The details in these plans form the backbone of how industry has to provide prevention measures, response equipment and trained personnel, as well as perform drills and other exercises each year. These plans undergo a formal review every five years and are approved by DEC.

Practice does not make perfect, it makes better. That’s it. Being proactive in preventing oil spills and having strong response systems in place ahead of a spill is the best practice to maintain a pristine environment. Without a strong regulatory presence requiring these safeguards, they could disappear, putting our current world-class system at risk.

After 30 years with no major disasters, it would be easy to develop a false sense of security and let complacency creep back in.

One thing I learned during my 46 years as a seagoing marine engineer is that when you least expect it, something beyond your imagination could very well happen.

The problem with letting your guard down is a guy named Murphy. For those that haven’t heard his law, it says: if it can go wrong, it will. Trimming details in the interest of simplicity, losing institutional knowledge as folks retire, rollbacks of regulations, reduced regulatory budgets and staff – all of this is setting up Mr. Murphy to once again prove his point. A point that will inevitably be made at a high cost to Alaskans, their livelihoods, and the amazing waters and lands in which we work, live and play.

Public input is needed to strongly oppose any legislative or regulatory changes that would erode oil spill prevention and response standards, increase the risk of a catastrophic spill or demonstrate a return of the complacency on the part of the oil industry and regulators that Congress determined to be a primary cause of the Exxon Valdez oil spill. I encourage all Alaskans to make public comment in support of strong regulations that protect our pristine environment, coastal attractions, unique wildlife, healthy fish populations and businesses from oil pollution.

Comments can be submitted at http://alaskadec.commentinput.com/.

Robert Archibald is the president of the board of directors for the Prince William Sound Regional Citizens’ Advisory Council and has lived in Homer since 1984. Archibald spent 46 years as a mariner, including service in the U.S. Coast Guard, and 32 years as chief engineer on Crowley Marine Service vessels in various locations, 22 of which were in Valdez, before retiring in 2014.