All the warning lights are flashing red for Alaska’s economy 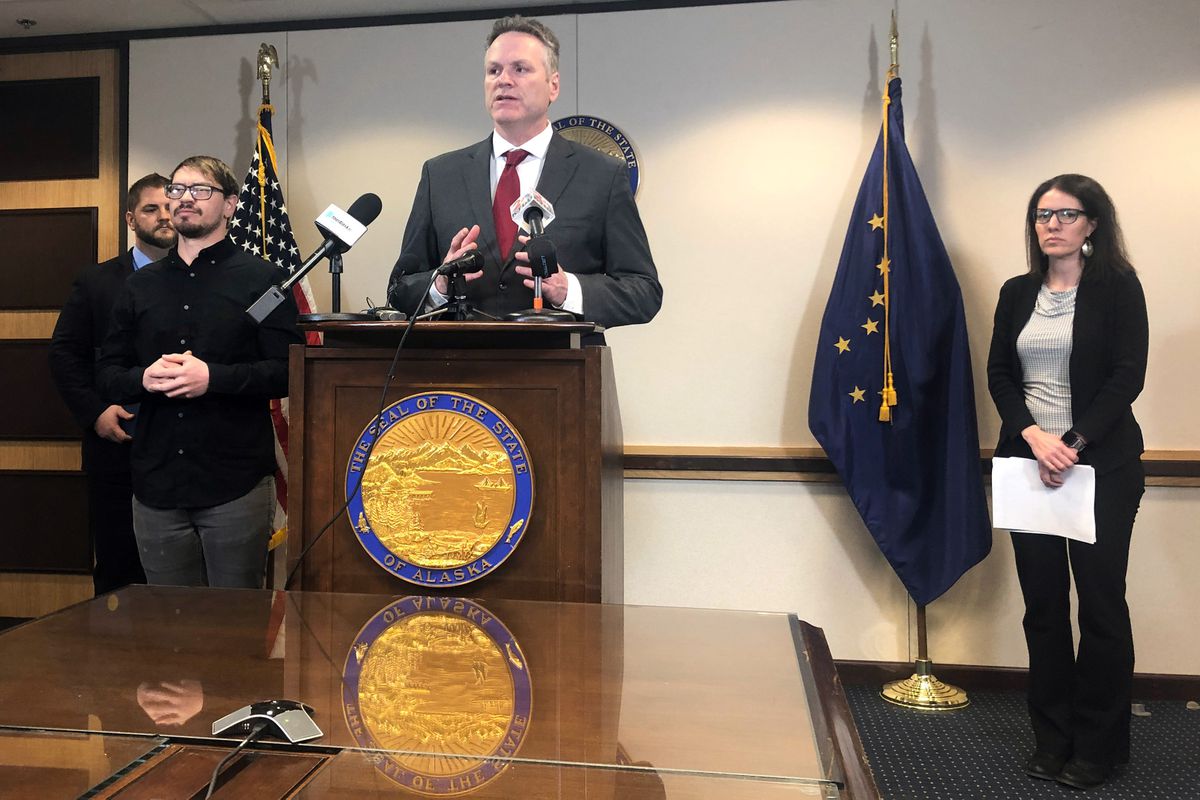 Governor Mike Dunleavy announced an emergency declaration amid coronavirus concerns in Alaska, Wednesday March 11, 2020, which he said will open up access to federal funds in order to better deal with the disease. (Morgan Krakow / ADN)

Governor Mike Dunleavy announced an emergency declaration amid coronavirus concerns in Alaska, Wednesday March 11, 2020, which he said will open up access to federal funds in order to better deal with the disease. (Morgan Krakow / ADN)

Alaska faces an economic crisis with simultaneous threats to each of its most important industries, the first time this has ever happened. All warning lights are blinking red and no one seems to be flying the plane.

Each of Alaska’s previous economic downturns hit a single sector among the state’s few economic pillars.

The recessions that began in 1985 and 2015 happened when oil prices dropped, subtracting a substantial chunk of economic activity from that industry and from state government.

After September 11, 2001, the tourism industry took a big hit, dragging down a major source of Alaska employment and small-business revenue. In the early 1980s, an international scare over botulism-tainted salmon brought that industry to its knees.

Those were tough times, but in each case, employment losses in one industry were cushioned by the health of other sectors. Today, we stand on the precipice of multiple industries being in trouble at once.

At this writing, with crude oil trading around $34 a barrel, oil companies are losing money in Alaska. Including capital, operation, transportation, taxes and royalties, a barrel costs them $40 to produce here.

That cost is for legacy oil flowing through existing facilities. Oil from new development costs more.

Meanwhile, a series of banks and investment funds have announced they won’t invest in Arctic oil projects anymore, including JPMorgan Chase, the world’s biggest funder of oil development. For the smaller companies most likely to develop new oil in Alaska, that’s a big deal.

Endlessly optimistic local boosters say these are temporary problems. Oil prices go up as well as down. But experts see reasons for oil prices to stay low.

Russia and Saudi Arabia are stepping up their oil price war as they vie for political power in the Middle East. The Wall Street Journal reports that Russia is well-prepared to weather low prices and the Saudi finance ministry is budgeting based on oil at $12 to $20 a barrel.

The oil industry’s decline was already evident in the underperformance of oil stocks for years before the current market crash. Influencing the finance industry to pull back from Alaska was surprisingly easy, an activist at the center of the effort told me. The dominoes were balanced to fall.

That’s bad for Alaska’s economy, but oil prices aren’t the biggest threat to jobs. The tourism industry employs many more Alaskans than oil and delivers customers to small businesses around the state.

The U.S. State Department and health officials have warned Americans against boarding cruise ships. After watching cruise ships stranded at sea with coronavirus aboard, I doubt many people needed to be warned.

We’re in prime time for summer travel booking. Can you imagine a typically risk-averse, elderly cruise passenger making a deposit on a cruise or tour right now?

Let’s face it, they’re not coming.

We can hope and pray this epidemic will not be as bad as predicted, but so far those hopes have not been borne out. Even if the worst of it passes quickly, as appears to have happened in China, the summer tourism season will likely be very bad.

The labor force is always a worry for large seafood employers in remote locations, who must navigate immigration rules and complicated logistics to get workers on their lines. In the midst of an epidemic, its hard to see how a crowded plant and bunkhouse could operate at all.

Bristol Bay sockeye will be here in July. If processors don’t have thousands of workers in place, no one will be buying the fleet’s catch.

I hope that doesn’t happen and I don’t know if it will. My goal isn’t to intensify the fear. But I think wise leaders would be preparing Alaska for the worst-case scenario.

And that brings me to another key sector of Alaska’s economy that is in trouble, our state government.

Federal, state and local governments employ more Alaskans than any private-sector industry. The state government is a key economic driver, with the people it employs and the services they provide, and the benefits paid out in various programs, including the Alaska Permanent Fund dividend.

Since 2015, however, the state has been spending down savings to balance expenditures with income. Responding to a divided public, elected leaders have been unable to agree on a new source of revenue to fill the gap created by reduced oil prices and production. Now the savings funds are almost empty.

Other than federal pass-through funds, the state’s only significant sources of revenue are from oil and from Permanent Fund investments. And now oil and securities prices are both crashing at the same time.

The state’s only remaining shock absorbers are the Permanent Fund’s earnings reserve and the dividend.

Reducing dividends would further damage the economy. But the other choice is worse. Last week, the Permanent Fund’s trustees warned of “a catastrophic fiscal failure” unless the Legislature restructures its withdrawals from the fund.

Gov. Mike Dunleavy tried to cut his way to a balanced budget last year. His thoughtless, chaotic attacks on services produced a powerful backlash. Facing a recall, he retreated.

Dunleavy’s Plan B seems to be sitting quietly and doing nothing in hopes Alaskans will forget their anger. Taking a leaf from President Donald Trump, he has tried to wish away the COVID-19 epidemic, calling it a “glitch.”

We can’t prepare for the coming storm without leadership. Under Alaska’s constitution, the governor is the leader. He needs a plan.

Or perhaps someone can step forward from the Legislature.

There’s no one in the cockpit and a lot of flashing lights. Does anyone know how to fly this thing?