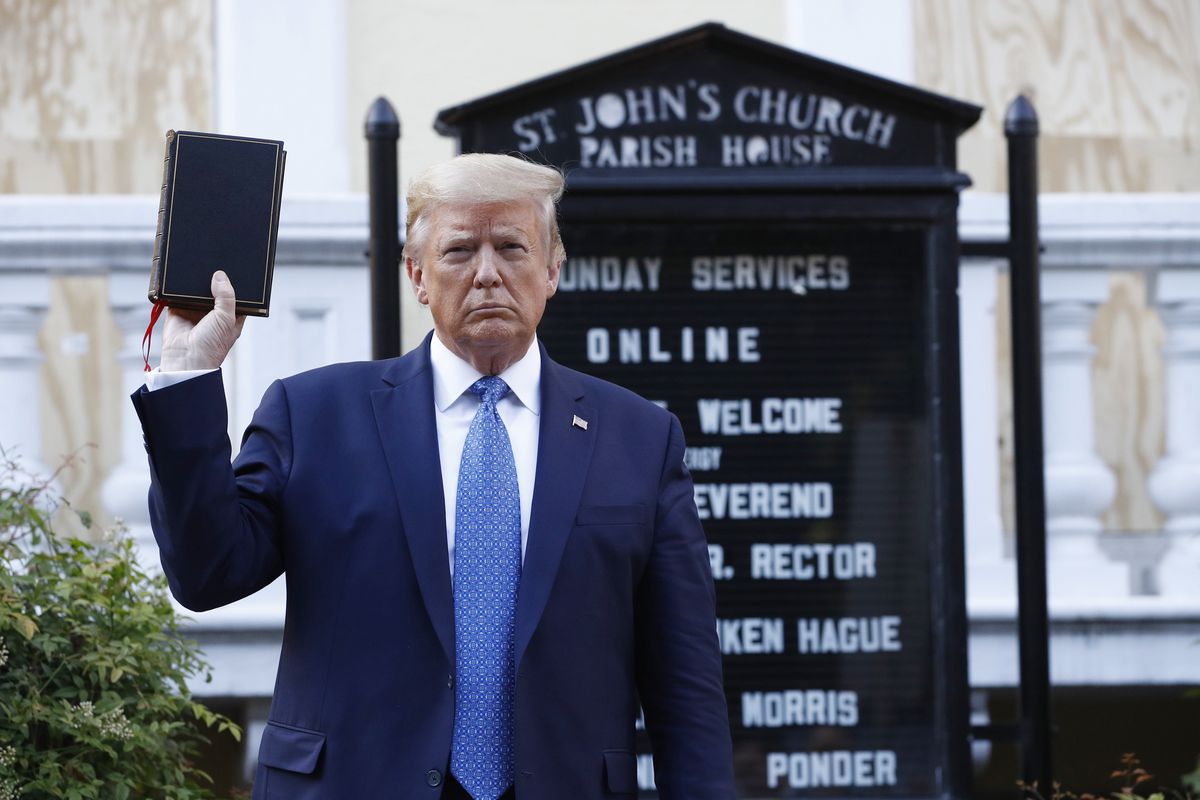 President Donald Trump holds a Bible as he visits outside St. John's Church across Lafayette Park from the White House Monday, June 1, 2020, in Washington. Park of the church was set on fire during protests on Sunday night. (AP Photo/Patrick Semansky)

President Donald Trump holds a Bible as he visits outside St. John's Church across Lafayette Park from the White House Monday, June 1, 2020, in Washington. Park of the church was set on fire during protests on Sunday night. (AP Photo/Patrick Semansky)

“Thou shalt not take the name of the Lord thy God in vain.” This is among the most serious offenses in the Judeo-Christian tradition — but It doesn’t refer to shouting “Oh my God” when you are shocked. It refers to utilizing God’s name, or the imagery associated with God, as a prop in order to bolster one’s own image and agenda.

This is the offense that President Donald Trump committed Monday live on television, as he made his statements about imposing the violent force of the military on U.S. citizens, then marched across the street. Using the burned and boarded-up St. John’s Episcopal Church as a backdrop, he brandished a Bible while praising the state. To engage in such arrogant self-aggrandizement is a direct betrayal of the Christian faith’s call to humility.

It’s unavoidable that faith and politics will overlap. There are almost no political issues that do not have some impact and influence on how we live out our faith, and vice versa. This requires patience and nuance; flexibility and compromise. Monday’s actions cross the line of reasonable forbearance by taking a book that is intended to create love and justice and perverting it into a tool for supporting oppression and violence; by taking a building that is supposed to be a gathering place devoted to God and using it as a setting for a pageant of presidential power. In doing so, the president has sullied them both, and demonstrated his lack of understanding of the contents of the book he so improperly utilized.

Time and again, in Christian Scripture and tradition, God demonstrates what theologians have termed the “preferential option” for the oppressed, meaning that God is more likely to be found among the meek, not the mighty. The ministry of Jesus directs disciples to stand among peaceful protesters, like those who were cleared out of Lafayette Park with pepper balls and other violent means for the sole purpose of enabling the president to exploit the church as a photo op.

The president has frequently boasted about his use of the phrase “Merry Christmas.” We invite him to find the Christmas story in the Bible, particularly Mary’s song in Luke, chapter one, for a scriptural understanding of how God reorders our priorities:

“God has brought down the powerful from their thrones,

and lifted up the lowly;

God has filled the hungry with good things,

and sent the rich away empty.”

We pray regularly for the president: That he will be healthy and safe, and that he will be motivated by compassion and intelligence. Today, we add to that prayer: We pray that he stops misusing the Christian faith as he did this week. Because, as Exodus 20:7 reminds us, “the LORD will not hold him guiltless that taketh his name in vain.”

But more importantly, we consider the words of Episcopal Bishop Mariann Edgar Budde, who oversees the church that the president misused. She told NPR: “I want to keep our focus on the precipitating causes of the events of this week, and concentrate my outrage at the wrongful death of George Floyd and the string of African Americans who have preceded him in this long history of abuse and violence. We absolutely stand with peaceful nonviolent protesters seeking justice in our land.” We pray that the president hears her, and all those who cry out for justice.

The Rev. Michael Burke is rector of St. Mary's Episcopal Church in Anchorage.