How should the University of Alaska move forward? 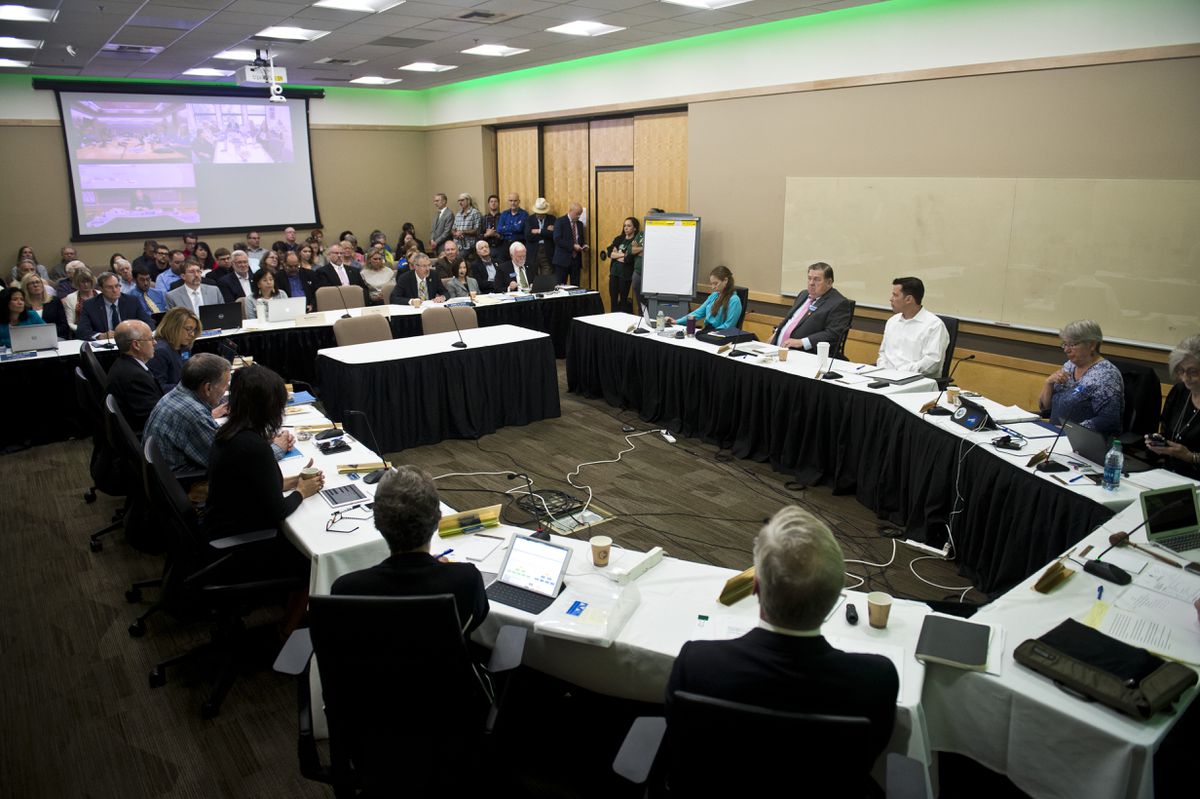 The University of Alaska Board of Regents met at UAA to discuss restructuring the university in the face of budget cuts on July 30, 2019. (Marc Lester / ADN)

The University of Alaska Board of Regents met at UAA to discuss restructuring the university in the face of budget cuts on July 30, 2019. (Marc Lester / ADN)

Recent news worth pondering about our state university:

It’s enough to cause any Alaskan to throw hands in air. What in the world is going on?

First off, with $60 billion-plus in our piggy bank, Alaska should have a first-rate university. We don’t. We could be headed for third-rate.

Here’s why this is important: If the university spirals down, fewer Alaska young people will enroll — we’re seeing this. They’ll go to college out of state.

Experience shows most of them won’t return. For parents hoping to keep kids close, this isn’t good news.

It’s not good either for Alaska businesses and institutions hoping to recruit locally. Hiring nonresidents costs more and typically results in higher turnover.

Who’s to blame for all this, and what can be done?

Context is needed: Enrollment has been trending down since 2011 for a variety of reasons, partly because high school populations are also dropping and, at least until the recession hit in 2016, there were plenty of higher-paying jobs that didn’t require a college degree.

Also, all parts of the state budget including the university were squeezed when oil prices and state revenues crashed in 2016. In the five years since the university’s budget has been cut by $100 million a year and the overall state budget by more than $1 billion.

But the university’s cuts really accelerated after Gov. Mike Dunleavy took office a year and a half ago, and the enrollment decline accelerated in lock-step.

People around the governor had convinced him that our university should operate at Lower 48 community college costs. The result of this was the governor’s proposal for a huge $136 million of state funds, or 41% state funding, cut in one year.

Dunleavy eventually backed off from that — after getting rid of some of his advisers — and compromised on a $70 million cut spread over three years, which is painful enough.

The university is now in year two of that, with $25 million trimmed this year. That became $50 million effectively when COVID-19 hit in March and added $25 million in costs and lost revenues.

Has the university been hit harder than other state agencies? Arguably, yes. But there’s more to this: In a world of tighter budgets, institutions need to change and figure out how to be more efficient, doing more with less.

It’s tough for any organization to reform itself because there’s always pushback from within. This has been especially true with the university.

There was huge opposition and it was never clear the consolidation would really save much, but it was temporarily suspended last fall due to accreditation concerns. However, a period of “program review” continued, which led to 45 courses being cut or consolidated. Program review is continuing.

So far, most of the university’s core courses in fields like engineering are intact, at least in name, but many of these are absorbing 12% cuts this year. While there are few layoffs as such, many professors who retire or leave for personal reasons aren’t being replaced.

Next year, there’ll be more of the same, with another $20 million cut. The university’s Board of Regents will meet this fall to map a plan for that. I don’t envy them.

President Johnsen and the regents will have to push ahead with consolidations and course reviews, which will be painful. Expect more squawks. Faculty don’t want teaching positions ranks cut and their view is that the university is still top-heavy on administration, which I’m not competent to judge.

However, some senior faculty I’ve spoken with agree with the thrust of Johnsen’s ideas. A future with lower budgets will require innovations in the way things are taught.

An indicator of what’s more to come is that the university-wide distance learning, forced in March by COVID-19, went over better than many thought.

I was surprised to learn that summer enrollment at Mat-Su College, which is a part of UAA, actually increased and by a fair percentage, although the student numbers are small. These were for a variety of general education courses like mathematics and art history, so it wasn’t just one or two hot courses drawing students.

It’s possible that that a heavier mix of online with certain classes taught in person might be acceptable. Taking this a step further, some faculty I’ve spoken with support the idea of focusing resources strategically.

This idea has been around a while. Johnsen has championed it, in fact. This could have one university taking the lead in teaching certain courses and students at the other institutions attending online. This is now being done in education, where UAS is designated as lead.

This could work in other fields. Both UAF and UAA teach mechanical, civil and electrical engineering and computer science. It’s not a stretch to think that content can’t be standardized so the same course can be taught university-wide, which would result in faculty used more efficiently. This is already being done in computer science and engineering.

I know this is complicated. I appreciate that there will be strong opinions about what should be in standardized courses, and that’s understandable. However, this transition is going to happen because distance delivery is improving, students and faculty are adjusting and budgets will require it.

But because universities like ours operate on a “shared governance” basis, people have to be consulted, particularly faculty who know better than anyone what should be taught. Decisions can’t all be top-down, but they do have to be made.

This will be messy and noisy. That UA’s faculty union is calling for President Johnsen’s resignation seems to me like more noise.

Whether we like Johnsen or not, we do need leadership at all levels to move this along. Creating more turmoil at the top is the last thing the university needs need right now.

Tim Bradner is copublisher of Legislative Digest and Alaska Economic Report. He previously served as a guest professor in the UAA journalism department from 2018-2019.