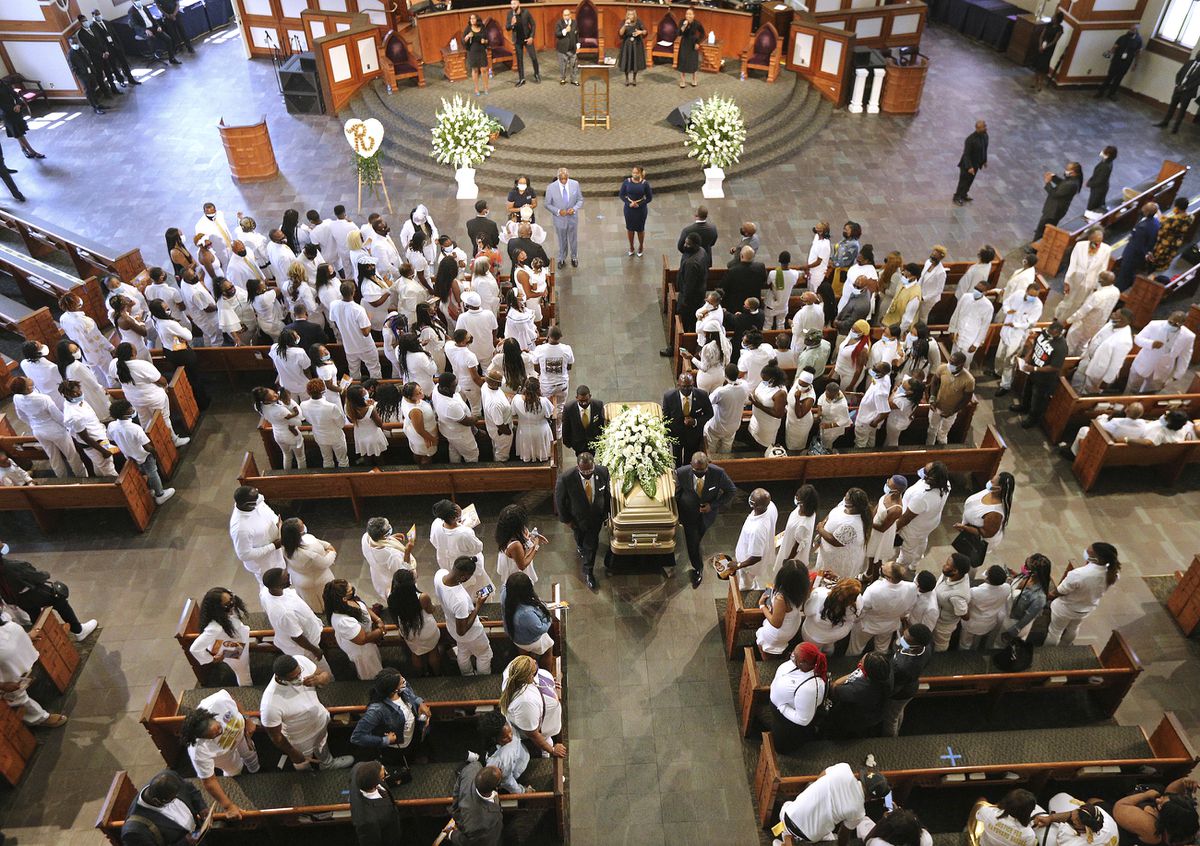 Family members dressed in while stand in respect as the body of Rayshard Brooks is carried out during his funeral in Ebenezer Baptist Church on Tuesday, June 23, 2020 in Atlanta. Brooks, 27, died June 12 after being shot by an officer in a Wendy's parking lot. (Curtis Compton/Atlanta Journal-Constitution via AP, Pool)

Family members dressed in while stand in respect as the body of Rayshard Brooks is carried out during his funeral in Ebenezer Baptist Church on Tuesday, June 23, 2020 in Atlanta. Brooks, 27, died June 12 after being shot by an officer in a Wendy's parking lot. (Curtis Compton/Atlanta Journal-Constitution via AP, Pool)

Late one Saturday night in 1964 when I was 17, I was sitting with my friend Tom and two other friends in Tom’s father’s Chevrolet Impala with the engine running, drinking beer out of quart bottles. When Tom looked in the rearview mirror and saw a police car coming down the street, he panicked, stomped on the gas pedal, and the Impala roared off. The police car turned on its lights and came after us. When the Impala turned a corner, we threw the bottles out the windows, and when each bottle hit the asphalt, it shattered.

The police car quickly ran us down.

When Tom pulled over, after shining his flashlight into the Impala to see who he was dealing with, the police officer who stopped us took our driver’s licenses and radioed in our names to see whether any of us had prior entanglements with law enforcement — and none of us had. When the officer walked back to the Impala, he told us to drive back and clean up all the broken glass. Then he warned us that if he caught any of us drinking beer again, he would take whoever he caught to the local juvenile detention facility.

Eight years later, early one Sunday morning when I was 25, I was one of the stragglers who closed the Pioneer Saloon, the principal watering hole that locals patronize in Ketchum, Idaho, to which I had moved that summer in order to ski for the winter at Sun Valley. When I staggered across Main Street to where my Volkswagen Beetle was parked, got in, turned the key in the ignition and the engine fired up, behind me, lights began flashing. If the police officer who had watched me weave my way to my car then had given me a sobriety test, I would have flunked. But he didn’t. Instead, he asked where I was living and I said I was housesitting for friends who lived in Hulen Meadows north of town. Then he said: “Here’s the deal. I can handcuff you for the ride to the Blaine County Sheriff’s Office, where I’ll book you for drunk driving, and you can spend the rest of the night in jail. Or you can lock your vehicle and start walking to Hulen Meadows. Your choice.”

So I locked the vehicle and started walking.

Those run-ins with the police crossed my mind last week when I watched the video of Rayshard Brooks being shot to death in the parking lot of a Wendy’s restaurant in Atlanta, Georgia.

Brooks, who had been drinking, had passed out in his automobile, which he had parked in the drive-thru lane of the restaurant. When one of the Wendy’s employees reported that a man was sleeping in a vehicle that was blocking the drive-thru lane and a police officer named Devin Brosnan arrived, he roused Brooks and had him move his car. Brosnan then may have suggested to Brooks that he go back to sleep. But then an officer named Garrett Rolfe arrived and decided to give Brooks a Breathalyzer test that he barely flunked. Brooks then suggested that he leave his vehicle in the parking lot and walk to his sister’s house. Instead of allowing him to do that, Officer Rolfe decided to arrest Brooks. But when he was being handcuffed, Brooks resisted. A scuffle ensued that ended when Brooks grabbed Officer Brosnan’s Taser and ran off across the parking lot. When Officer Rolfe ran after him, Brooks turned and pointed, but didn’t fire the Taser. When he then resumed running, Officer Rolfe unholstered his weapon, took aim and shot Brooks twice in the back.

Passing out drunk in a vehicle parked in the drive-thru lane of a fast food restaurant was a stupid thing to do. And resisting arrest and then running off with the Taser was even more stupid since, had Brooks escaped, officers Brosnan and Rolfe knew who he was and he soon would have been located and arrested. But stupidity should not be a capital crime.

Watching the video of Rayshard Brooks’s murder — and that is what it appears to have been — got me to thinking about the difference between his fate and my own.

Why, when I was apprehended for underage drinking and trying to outrun a police car, was the only consequence that the police officer who stopped my friends and me made us clean up the beer bottles we had broken? And why, when I was only two years younger than Rayshard Brooks was when he was shot —and way drunker — was I allowed to start walking, while Officer Rolfe decided to arrest Brooks rather than allow him to walk to his sister’s house or, better yet, to have driven Brooks to the sister’s house and given her Brooks’ car keys?

Rayshard Brooks was a 27-year-old African American who officers Brosnan and Rolfe, both white, knew after they radioed in his name had an arrest record that stretched back to 2014 and was on parole after he had served one year of a seven-year prison sentence for false imprisonment and credit card fraud. So when he decided to arrest Brooks, Officer Rolfe knew that as a consequence of the arrest, Brooks might have his parole revoked and return to prison.

But Officer Rolfe didn’t care, because Rayshard Brooks was just another Black man who, like too many African American men of his age and limited education, had an arrest and prison record. And besides, that is what white police officers in Black neighborhoods in Atlanta, Georgia, were trained to do: arrest people.

What should justice for Rayshard Brooks have looked like?

Should I, in 1964 and 1972, and Rayshard Brooks, in 2020, have been treated the same — both of us being arrested for having stupidly committed criminal offenses of which we both were guilty? Or should Officer Rolfe have given Rayshard Brooks the same break that white police officers twice gave me?

Members of the Black Lives Matter movement likely would say that Rayshard Brooks should have been given the same break that I twice was given. After thinking about it pro and con, my view is that because I can argue it either way — there is no obviously correct answer to those questions.

While what I think about that is of no particular importance, what is of paramount importance is that bleeding out on the asphalt in the parking lot of a fast food restaurant after having been shot by a police officer who had no legitimate reason to fire his weapon is not a way anyone should have to die. Because it is not, sending Garrett Rolfe to prison for years longer than Rayshard Brooks would have served had he been arrested and had his parole revoked may be a necessary act of required justice. But an-eye-for-an-eye retribution will not give Rayshard Brooks’s life and senseless death the meaning that at this moment in the nation’s history they merit.

The way for those of us who have the good luck in a racist society to be white — and, because we are, to have a non-confrontational relationship with law enforcement — to honor the life of Rayshard Brooks is to join with members of the Black Lives Matter movement to do all we can to have the conversation about race and policing that now is underway in cities and towns across America result in changes in police attitudes, conduct, and protocols that — to paraphrase Martin Luther King, paraphrasing the abolitionist Theodore Parker — bend the moral arc of the universe more toward justice.

That is the least we can do. Not only for Rayshard Brooks, but, even more importantly, for all men and women of color who all across America are still alive and want to stay that way.

Donald Craig Mitchell is an Anchorage attorney, author of two books on the Alaska Native Claims Settlement Act and “Wampum: How Indian Tribes, the Mafia, and an Inattentive Congress Invented Indian Gaming and Created a $28 Billion Gambling Empire.” He was also a former vice president and general counsel for the Alaska Federation of Natives.