It’s time to to enact the Equal Rights Amendment 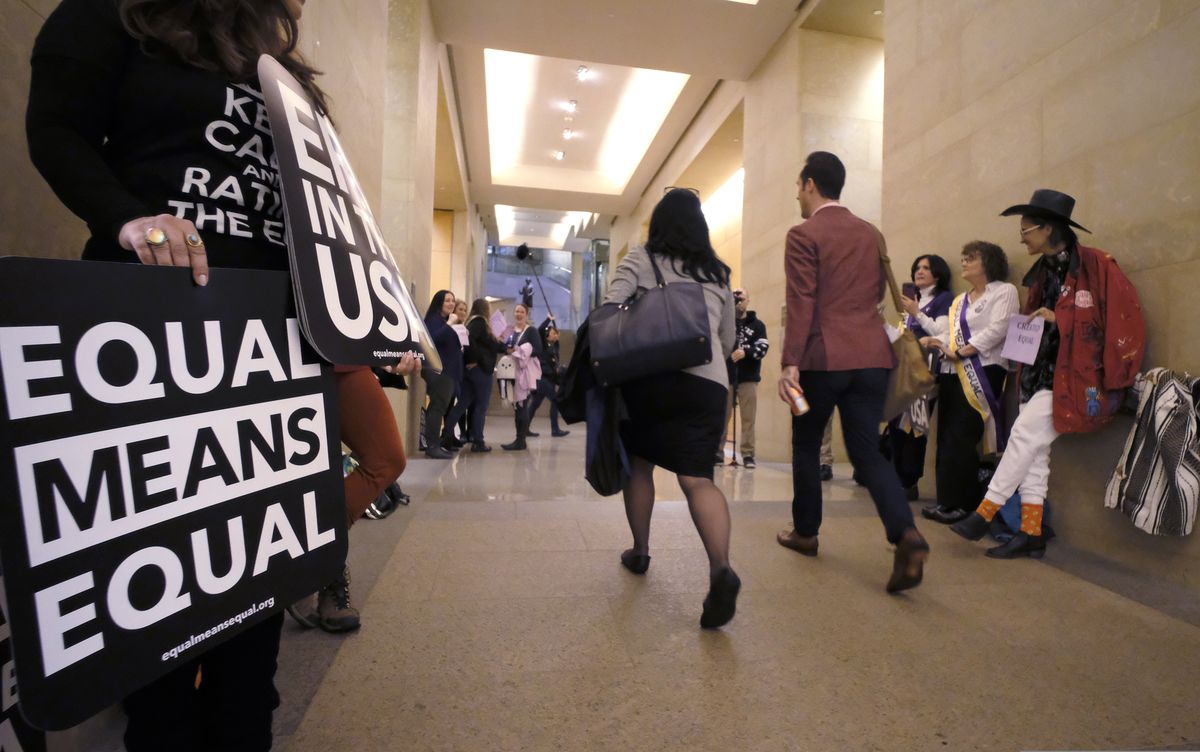 An Equal Rights Amendment supporters yell encouragement to two legislators as they walk down a hallway inside the state Capitol in Richmond, Va., Tuesday, Jan. 14, 2020. A House committee approved a resolution Tuesday, to ratify the state's Equal Rights Amendment, which advocates hope will become the next amendment to the U.S. Constitution. The 13-9 vote split along party lines, with all Democrats supporting it and all Republicans opposing it.(Bob Brown/Richmond Times-Dispatch via AP)

An Equal Rights Amendment supporters yell encouragement to two legislators as they walk down a hallway inside the state Capitol in Richmond, Va., Tuesday, Jan. 14, 2020. A House committee approved a resolution Tuesday, to ratify the state's Equal Rights Amendment, which advocates hope will become the next amendment to the U.S. Constitution. The 13-9 vote split along party lines, with all Democrats supporting it and all Republicans opposing it.(Bob Brown/Richmond Times-Dispatch via AP)

Section 1. Equality of rights under the law shall not be denied or abridged by the United States or by any State on account of sex.

Section 2. The Congress shall have the power to enforce, by appropriate legislation, the provisions of this article.

Section 3. This amendment shall take effect two years after the date of ratification.

This is the entire text of the Equal Rights Amendment. The ERA was originally introduced by suffragists Alice Paul and Crystal Eastman in 1923. It seems so simple, doesn’t it? Basically, what it says is that women — Black women, women of color, Indigenous women and white women — all have the same rights as men. It says that women are not second-class citizens. And yet, here we are in the year 2020, almost 100 years later, and we still don’t have the Equal Rights Amendment as part of the Constitution. How did this happen? Or rather, how did this not happen?

With the support of the League of Women Voters, Congress passed the Equal Rights Amendment in 1972 and Alaska was the 10th state to ratify the ERA, on April 5, 1972. At the time, I imagined that the rest of the states would follow our lead. How naïve I was! The amendment required 38 states to ratify before becoming the 28th Amendment to the Constitution.

Although I was confident of a positive outcome, I also recognized that some fundraising was necessary to speed the ratification. Along with my friends, I organized a dinner at the old McPhetres Hall at Holy Trinity Episcopal Church in Juneau. We made enormous pots of soup, baked crusty brown loaves of bread and oversized cookies and invited the community to come. We covered every table with butcher paper and crayons for the kids and scattered copies of the ERA on every table for everyone to read. Musicians brought their guitars and sang and the kids, of course, raced around, unaware that their futures were being discussed in Juneau and all over the nation. We were thrilled to raise $1,000 and sent a check by mail the next day. It was a very satisfying feeling to contribute to something bigger than ourselves.

Fast forward from that community dinner 48 years ago to January 2020, when Virginia became the 38th state to ratify the ERA. Problem solved, right? No. The deadline for ratification was June 1982.

Consequently, in November 2019, Senators Lisa Murkowski (R-Alaska) and Ben Cardin (D-Maryland) sponsored a bipartisan resolution to eliminate the deadline. As Senator Murkowski said, “Everyone should be treated equally under the law, but the U.S. Constitution does not currently guarantee women the same rights and protections as men.” Naturally, the League of Women Voters supports the removal of the deadline.

“Women were intentionally left out of the Constitution when it was written,” said Jessica Neuwirth, founder and co-president of the ERA Coalition and Fund for Women’s Equality. “The Equal Rights Amendment is long overdue.”

It is not just the League of Women Voters who support the ERA. According to the Guardian, a new poll shows that “about 3 in 4 Americans support the Equal Rights Amendment.” If that majority were truly represented in Congress, we would have the ERA as the 28th Amendment now. For all of my life, I’ve lived in a country without equal rights for women. Forty-eight years ago, I thought that our country had finally matured. I was wrong. The time for redress of pay inequity, domestic violence, workplace harassment, and sexual assault is past due for black women, women of color, indigenous women, and white women — we are all demanding equal protection and opportunities under the law. We all deserve it.

Bridget Smith has lived in Alaska since 1968, and is a member of the League of Women Voters, an organization of women and men that grew out of the suffrage movement. LWV works for voting rights, fair elections and an educated citizenry. LWV has four affiliates in Alaska.