Nothing in life is certain but death, taxes and Don Young 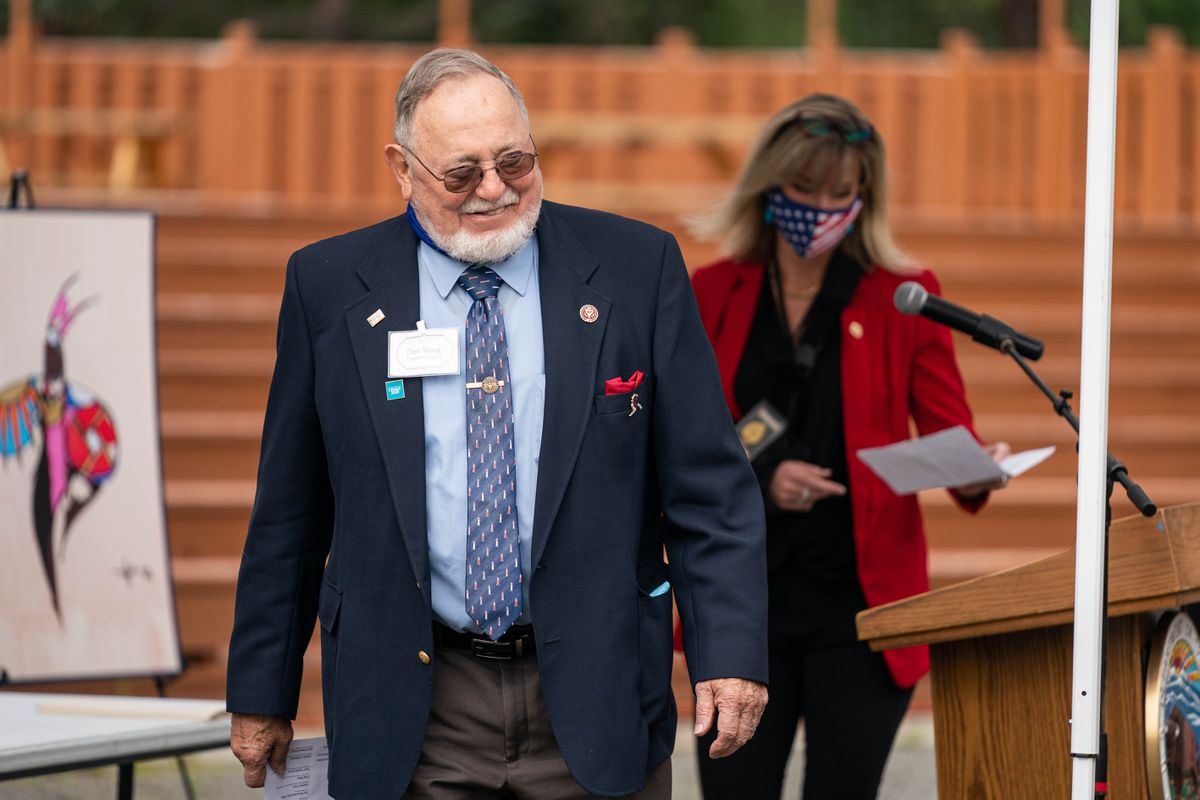 Rep. Don Young, R-Alaska, smiles as he walks to his chair after speaking during an event celebrating the opening of an Indian Affairs Cold Case Office on Wednesday, Aug. 26, 2020 at the Alaska Native Heritage Center in Anchorage. (Loren Holmes / ADN)

Rep. Don Young, R-Alaska, smiles as he walks to his chair after speaking during an event celebrating the opening of an Indian Affairs Cold Case Office on Wednesday, Aug. 26, 2020 at the Alaska Native Heritage Center in Anchorage. (Loren Holmes / ADN)

The voice was recognizable to any Alaskan older than a child.

It was arrogant, bombastic, contemptuous, especially when questioned by other voices. Relentless as a jackhammer, the voice pounded on for an hour about the coronavirus, the national economy, foreign policy, the federal debt, climate change, the postal service, abortion.

It was a voice that made up words unknown to the English language until the voice spoke them, and this day the voice, discussing law enforcement, referred to prisoner “incarcination.” It was a voice that, with bold bluntness, quoted itself as an infallible authority. Hadn’t it been in Alaska more than 60 years? Hadn’t it been in Congress almost 50 years? Hadn’t the voice successfully fended off Alaska’s enemies — environmentalists, Outsiders, liberals like that nasty San Francisco harridan Nancy Pelosi — since before a majority of Alaskans had been old enough to say a single word?

It was a voice energized by an apparently inexhaustible willpower, willpower that would be remarkable in a young man but was astonishing in a man past his 87th birthday. It was a voice that no doubt, on occasion, had heard “shut up.” But there is no known record that the voice ever heard “I can’t hear you. Please speak up.”

It was the voice of Congressman Don Young, running for his 25th term.

He was making a re-election appearance on radio — Alaska Public Media’s “Talk of Alaska.” If the self-anointed Congressman for all Alaska had lost a decibel to Father Time, it wasn’t apparent to the old man in Airport Heights who forced himself to take notes on the performance and looked forward, when the voice finished, to putting on Jimi Hendrix.

Could this be Don Young’s last campaign? Could he lose this time around? The old man in Airport Heights wondered what a bookie would say, but his favorite bookie had died and was thus outside cellphone range. He also wondered if Don Young had a deal with the devil that allowed him to remain in Congress until age 100 — or beyond. The Congressman was comfortable with transactional politics, and the devil was as much a constituent as the corporate executives who showered the Congressman with campaign contributions come election time. The Congressman likes to say he has friends on both sides of the aisle. Well, the prince of darkness does too.

No doubt those in the Don Young Industry — the lobbyists, lawyers, consultants, political operatives, and other beholden deadbeats — those who had fed off their relationship with Young for decades were worried. What would they do if Don Young’s pork-packing plant closed down? Would they, in their old age, finally have to hit the bricks and look for, God forbid, a job?

The primary election returns for challenger Alyse Galvin were unsettling in the Don Young Industry. Galvin, that attractive, smiling, confident middle-aged woman who ran before as an independent and lost, was clearly a much better candidate than in 2018, although the pandemic made retail campaigning almost impossible. She also had money, enough contributions to compete with the Congressman on equal footing in important media markets.

During the August primary, about 133,000 Alaskans had voted, some 23 percent of those eligible. The turnout was not unusual for an Alaska primary election. Fewer voters had participated in the Democratic primary than in the Republican primary, but Galvin still received about 1,400 more votes than the Congressman. And close to one in four who asked for the Republican ballot did not vote for Don Young. They voted for other candidates who were barely known — or unknown — to the public. Would they do the same in a general election?

So what’s the plan for the Don Young Industry? Get out the vote, especially the white male vote, the Trump vote, in the areas where the Congressman is strong: the Mat-Su Borough, the Kenai Peninsula, the smaller communities and towns on the highway system (Big Delta, for example), the oil city of Valdez, and the reliable Republican precincts in Anchorage and Fairbanks. In a surprise, or at least a surprise to the old man in Airport Heights, the Congressman had not done well in Bush Alaska in the primary. Maybe older Natives were tired of listening to him tell them how much he has done for them. Maybe younger Natives never heard of him. They probably never heard of Elvis.

Where there are Trump voters, make sure they are Don Young voters. Oh, and through advertising, inextricably link Galvin with Democrat Pelosi. Put them together in photos that make the two of them like deranged war criminals brought to trial or hysterical housewives on drugs suffering a bad hair day. Is this misogyny? Of course. Versions of this assault have been successful for Republicans all over the United States.