The Capitol rioters weren’t principled patriots. They were deluded play-actors. 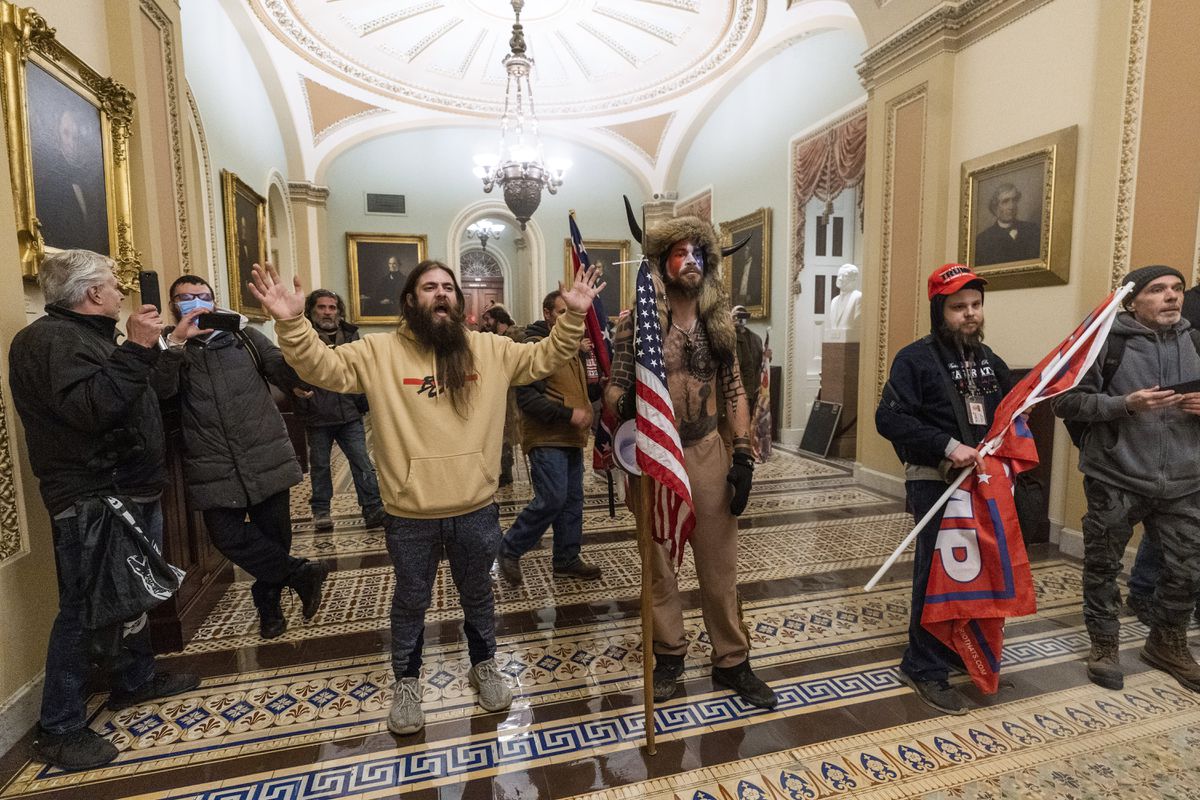 FILE - In this Wednesday, Jan. 6, 2021 file photo supporters of President Donald Trump are confronted by U.S. Capitol Police officers outside the Senate Chamber inside the Capitol in Washington. Jacob Anthony Chansley, the Arizona man with the painted face and wearing a horned, fur hat, was taken into custody Saturday, Jan. 9, 2021 and charged with counts that include violent entry and disorderly conduct on Capitol grounds. (AP Photo/Manuel Balce Ceneta, file)

FILE - In this Wednesday, Jan. 6, 2021 file photo supporters of President Donald Trump are confronted by U.S. Capitol Police officers outside the Senate Chamber inside the Capitol in Washington. Jacob Anthony Chansley, the Arizona man with the painted face and wearing a horned, fur hat, was taken into custody Saturday, Jan. 9, 2021 and charged with counts that include violent entry and disorderly conduct on Capitol grounds. (AP Photo/Manuel Balce Ceneta, file)

After Donald Trump was elected, I was asked what I expected from him as president. I replied, “lawlessness.” The future under Trump was not murky; You didn’t have to be a seer to have confidence in this prediction. Trump’s past made his future conduct clear.

As I watched protesters, demonstrators and rioters pour into the capitol – the argument continues about what they should be called – I thought about the sense of history many of them had expressed in the days, weeks and months before the invasion of the Congress. We, they said, are the heirs to the spirit of ’76. Heirs to the minutemen of Lexington. Heirs to the patriots who tossed tea into Boston Harbor. Heirs to Patrick Henry, who lives in American legend for one sentence: “Give me liberty or give me death.” It is one of the perversities of American history that Henry, a slaveholder, delivered his declaration to a room full of Virginia slaveholders, including Thomas Jefferson. Henry, a lawyer, also knew very well that Virginia law contained provisions designed to preserve and protect slavery.

Demonstrations produce a sense of purpose, a feeling of camaraderie, a conviction that the demonstrators are putting it to the evil establishment. The rioters who smashed their way into Congress were having a ball. You could see the pleasure on their faces as they roamed the corridors, entered offices, banged on doors, paraded around with Trump banners and flags. It never seemed to dawn on them that they were involved in a crime. Standing up for Donald Trump lawlessly was, for them, an act of self-sacrificing nobility and a lot of fun.

But what were the rioters going to do besides tear up the Capitol and express their feelings before leaving? Some commentators said they had come to overthrow the government. I don’t believe that. Unlike bolsheviks or fascists, these people had no interest in governing. Most of them had come to disrupt the Congressional certification of Democrat Joe Biden as president.

National Public Radio interviewed one intruder who said he wanted to hang Speaker Nancy Pelosi and other Congressional leaders on the grass in front of the capital. He said they should be forced onto the scaffold for treason.

Treason? In the history of the United States, very few men and women have been executed for treason. It’s a rare crime, rarer still when accompanied by the death penalty. Pelosi’s “crime” seems to be disagreeing about politics with the man who wants her hung. Nevertheless, the man NPR interviewed was driven by violent fantasies as were some others who broke in. A few screamed “Pence! Pence!” over and over. What would they have done to Vice President Mike Pence if they captured him?

On the morning of Jan. 6, many of those who stormed the Capitol got up in the morning, looked in the mirror and saw Patrick Henry. They did a couple of bravado poses to the mirror, repeated “Give me liberty or give me death,” made sure their cockade hat was at the right angle and drove to the demo. Of course only they could see the astonishing resemblance to Patrick Henry, but that was enough.

I am sure some of those arrested after they went home were shocked — just as they were shocked when they learned people died in the Capitol. They were shocked to discover the government intended to prosecute them. They never imagined a Patrick Henry impersonator could wind up in jail, then face a judge whose stern demeanor said, “The fun is over.”