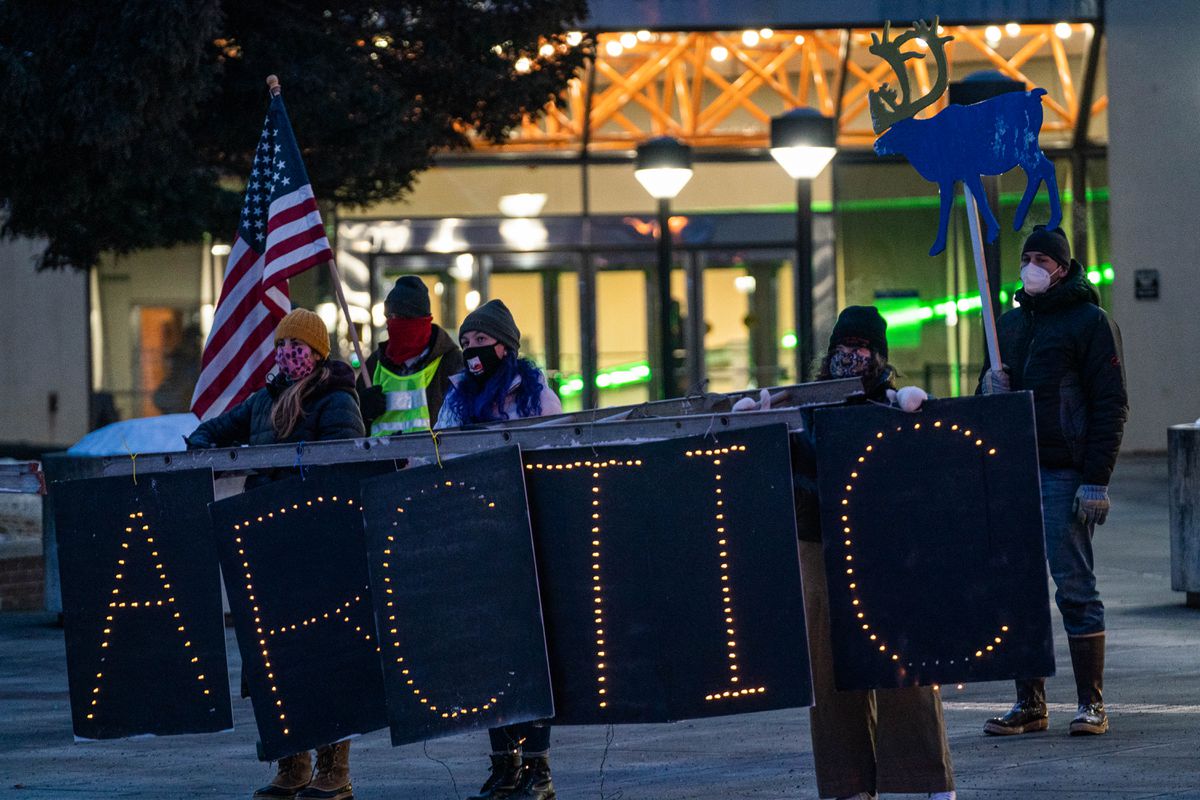 Protesters with Defend the Sacred Alaska and Native Movement stand outside the Federal Building before the Arctic National Wildlife Refuge oil and gas lease sale on Wednesday, Jan. 6, 2021 in Anchorage. (Loren Holmes / ADN)

Protesters with Defend the Sacred Alaska and Native Movement stand outside the Federal Building before the Arctic National Wildlife Refuge oil and gas lease sale on Wednesday, Jan. 6, 2021 in Anchorage. (Loren Holmes / ADN)

Most Alaskans weren’t paying attention to the Alaska Industrial Development and Export Authority (AIDEA) until last spring, when this entity became one of the first pandemic profiteers, conducting a shady financial transfer of $35 million of state funds to the Ambler road project. Dozens of Alaskans called in to the virtual meeting in good faith, asking instead for direct support for businesses struggling in the pandemic. Regardless, AIDEA’s board of directors voted unanimously to make the transfer and continues to celebrate its involvement in the Ambler road project, despite local opposition and questions surrounding its economic and social impacts. Last week, AIDEA drew increased attention by bidding on Arctic National Wildlife Refuge leases, one of only three entities to do so. This investment is an embarrassment to Alaskans and a clear sign that AIDEA does not aim to diversify the economy as their mission states. All eyes are now on AIDEA.

Despite the AIDEA board’s attempt to prevent or disregard Alaskans engagement in due public process, we were listening on Dec. 23 when Alaskans urged it – for an hour and a half – not to bid on Arctic Refuge leases. We were listening when it brushed aside and misrepresented our valid concerns for human rights, the economy and the climate, resolving unanimously to authorize as much as $20 million in spending on leases. We were listening on Jan. 6 as the Bureau of Land Management opened bid after bid from AIDEA, culminating in its commitment to spend $12 million on nine Arctic Refuge leases. And we’ll be listening and testifying again at its meeting on Jan. 13. Will board members listen to us as they decide how to spend state funds in large-scale projects? They are now in an international spotlight, and we won’t let Alaskans forget that they have gambled their future and climate on a highly risky investment.

As predicted, the leases that AIDEA purchased are not economically viable – even Big Oil and the financial industry would not bid on them. If finalized, these leases would require AIDEA to invest tens of millions of dollars more in state funds over the next 10 years in rent and fees, causing further financial hardship for a state in economic crisis. We urge the board to abandon the leases rather than proceeding to finalize them.

Despite opposition from more than 300 Alaskans statewide, including Iñupiat and Gwich’in leaders, AIDEA chose to ignore concerns and recommit Alaska’s future to a destructive extractive economy by bidding on these leases. This is a familiar course for AIDEA amid mounting pressure to diversify revenue and move from investment in dead-end projects like the West Susitna Access Road and the Ambler road, two projects that are more about infrastructure construction than any guarantee of long-term financial benefit. These projects do not benefit Alaskans, and AIDEA’s board chair Dana Pruhs potentially stands to profit from subsequent construction contracts. The Arctic refuge decision comes during a time of national turmoil, a pandemic and a financial crisis, when the climate crisis and Indigenous rights are front of mind for many Alaskans. AIDEA continues to indulge itself by investing state funds into harmful projects, unchecked and uninhibited, while tethering the Alaska economy to a dying industry.

Bernadette Demientieff, executive director of the Gwich’in Steering Committee, met with AIDEA last week, stating “This is for our next generation. This is about climate crises. The coastal plain nourishes life and sustains the Porcupine caribou herd that, in turn, sustains our people. Our way of life is not up for negotiation.” AIDEA’s decision to exploit the refuge’s coastal plain has destructive ramifications for traditional ways of life and for future generations. The Gwich’in Steering Committee and allies will not allow the disruption of the calving of the Porcupine caribou herd. AIDEA will be held accountable by the Gwich’in and the six million allies who have spoken in opposition to oil drilling in the Arctic refuge. Indigenous peoples have been overlooked and their ways of life destroyed over and over. It ends here.

The Legislature cannot continue spending scarce state resources without intentional legislative oversight and transparent and meaningful public engagement. We demand that they rectify this act of violence committed against the sacred coastal plain and the people who depend on it. AIDEA must focus on its mission to diversify Alaska’s economy, and the Legislature can and should hold them accountable to this mission.

Alaska has limited time to diversify its economy beyond oil. Extraction is not our future, but in fact destroys the very resources required to move through the climate crisis. Instead of being the canary in the coal mine for the rest of the country, Alaska can build an economy that works for all people and is based on regeneration, not extraction.

Bernadette Demientieff is the Executive Director of the Gwich’in Steering Committee. Nauri Toler is the North Slope Environmental Justice Coordinator for Native Movement. Emily Sullivan is the Arctic Program Coordinator for Northern Alaska Environmental Center. Siqiniq Maupin is the Executive Director of Sovereign Inupiat for a Living Arctic. Naawéiyaa Tagaban serves as a community organizer for Defend the Sacred AK. Margi Dashevsky is a Regenerative Economics Coordinator for Fairbanks Climate Action Coalition. Karlin Itchoak is the Alaska State Director of The Wilderness Society. John Gaedeke is the chairman of the Brooks Range Council. China Kantner is a Kobuk River resident. Alex Johnson is the Alaska Senior Program Manager for the National Parks Conservation Association. Elaine Schroeder is an organizer for 350 Juneau.