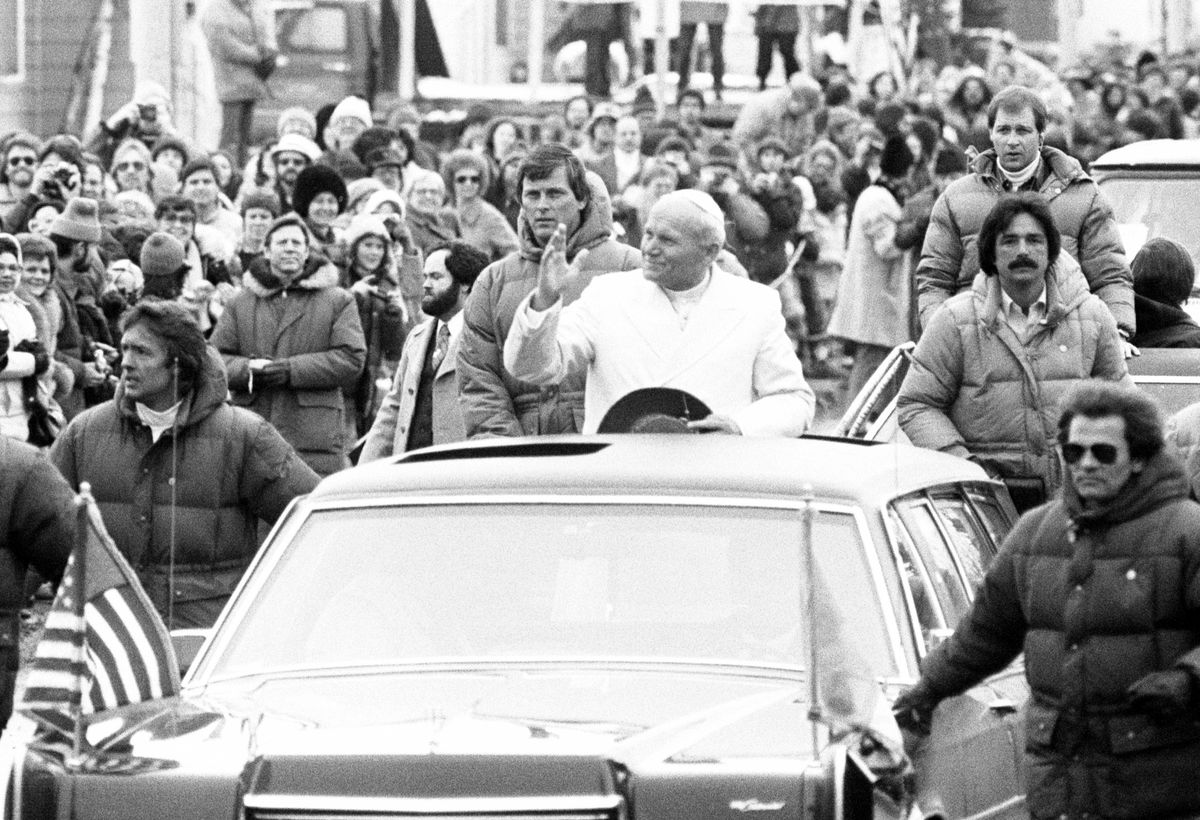 On Feb. 26, we commemorate the 40th anniversary of Pope John Paul II’s visit to Anchorage. Here is an excerpt about that event from my mother’s 1981 Christmas letter:

“About the middle of January, I received a call from Archbishop Hurley asking me to be the program director for the anticipated visit of Pope John Paul II to Anchorage. I had worked in the program department at NBC Hollywood in the 1940s, but believe me, it did not prepare me for this job. Within six weeks, our committee put together an outdoor Mass (in February, yet), a tremendously complex security system, transportation from outlying areas to the inner city, hospitality, selection of ecumenical leaders and handicapped persons who would meet the Pope, invitations to dignitaries all over the United States (including three cardinals, dozens of bishops and hundreds of priests), arrangements for 250 members of the world press, and entertainment at three stage locations outdoors for those who would be in place as early as the night before. I supervised such diverse groups as a 130-person choral group, Russian Orthodox singers, Polish, Spanish and Native dancers and an Eskimo blanket toss... oh yes, even a sled dog ride for the Pope. (There were so many who wanted to do this that I had to toss a coin between the two finalists.) In addition to the above, there were the physical facilities, such as building a $50,000 altar-stage, two sound systems and relays to the satellite. RCA Alascom bought much new equipment, and it was such a communications triumph for them that they made a movie of their preparation process. All went without a flaw, and our 200-person choir sang so well the Pope invited them to St. Peter’s — which, believe it or not, they will do in March (1982). Our final triumph occurred when the committee received a Gold Pan award from the Chamber of Commerce for one of the most flawless performances ever presented to Anchorage. There were 46,000 people at Mass, the largest single gathering ever for Alaska.”

Some estimates put the crowd totals much higher. Whatever the number, numerous Catholics and non-Catholics traveled from all over the state by plane, train and car to be present for his visit.

The Pope came to Anchorage on his return from a Peace Pilgrimage to the Philippines, Guam and Japan. Although his stopover was only 4.5 hours long, his schedule was crammed! Schools were closed that day, so as a teacher, I chose to go to the Delaney Park Strip with an ecumenical and multicultural group of friends including one who practiced the Jewish faith, another of Lebanese origin, who was raised in a Canada as a Muslim, and finally an Austrian-born fellow Catholic. The pope, in addition to acknowledging all of the Catholic religious men and women present, made a point to also greet Alaska’s Protestant ministers and Orthodox bishops. I was proud that my mother, as the program director, and my brother, as a choir member, were on the altar close to the Pope. I recall wishing I could have received the Eucharist directly from the Pope, as she did.

The Pope’s words were stirring: “Being here in Alaska, so richly endowed with the beauties of nature, at once so rugged and yet so splendid, we sense the presence of God’s spirit in the manifold handiwork of creation. And not only do we feel his presence in inanimate nature and in the order of plants and animals, but all the more so in the precious gift of life which God has breathed in to each one of his sons and daughters.”

The sled ride mentioned was taken with Col. Norman Vaughn, who stood behind the Pope on the dog sled, pulled by huskies for a 50-foot ride. Norman was a well-known Alaskan who accompanied Adm. Richard Byrd on his 1920 Polar Expedition and then, later in life, made his own excursions to the South Pole.

The Popemobile in which the pontiff rode was a white pick-up truck with bulletproof shields on all sides that allowed Pope John Paul II to stand and wave to everyone. He wore a fur-trimmed parka over his white garments that was gifted to him by three Alaska Native women at the airport.

After the visit, the Archdiocese of Anchorage directed that the altar be torn apart and made into small individual wooden crosses which were distributed throughout Anchorage parishes. I received one of these crosses, which I subsequently gifted to another upon her baptism into the church. There is a permanent plaque commemorating his visit on the spot where the altar stood on the park strip.

Tam Agosti-Gisler is an Anchorage resident and former member of the Anchorage School District School Board.