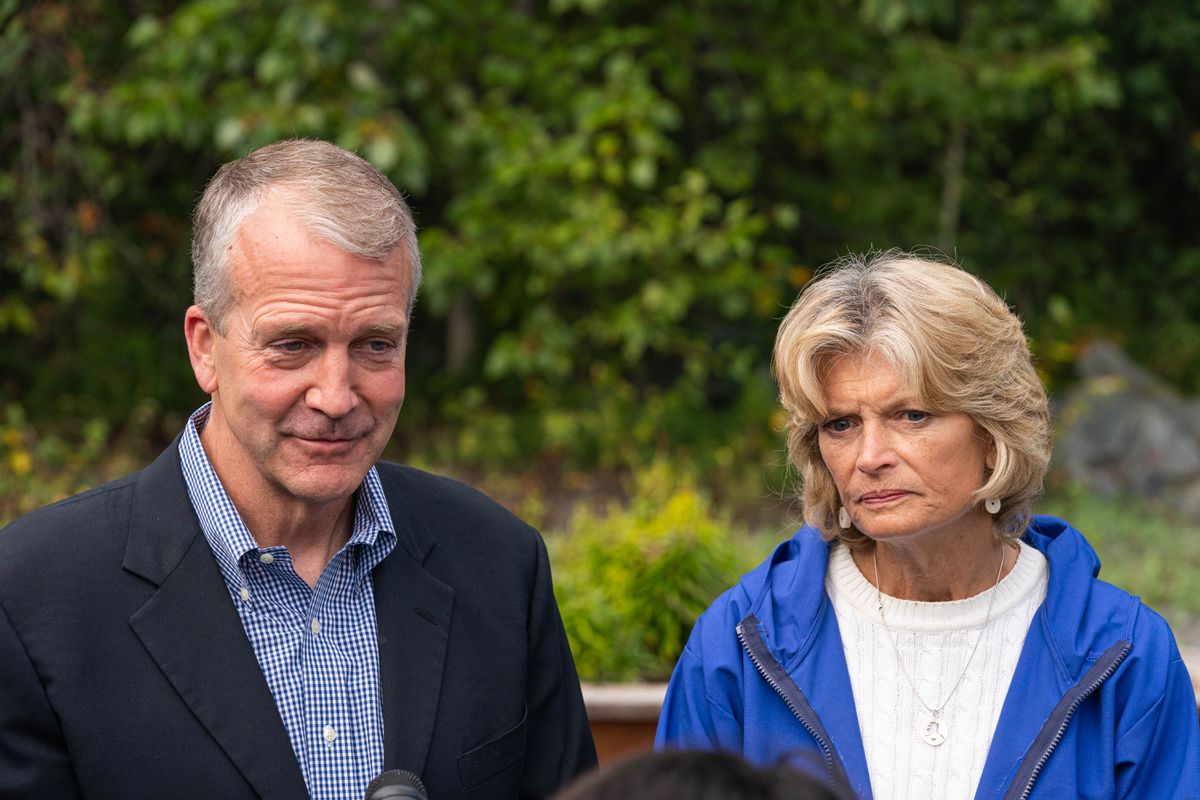 Sen. Dan Sullivan, R-Alaska, and Sen. Lisa Murkowski, R-Alaska, speak with a reporter after an event celebrating the opening of an Indian Affairs Cold Case Office on Wednesday, Aug. 26, 2020 at the Alaska Native Heritage Center in Anchorage. (Loren Holmes / ADN)

Sen. Dan Sullivan, R-Alaska, and Sen. Lisa Murkowski, R-Alaska, speak with a reporter after an event celebrating the opening of an Indian Affairs Cold Case Office on Wednesday, Aug. 26, 2020 at the Alaska Native Heritage Center in Anchorage. (Loren Holmes / ADN)

Conflict and disaster capture headlines and dominate television news. Two bipartisan accomplishments late last year by Sens. Lisa Murkowski and Dan Sullivan have been underreported and underappreciated. Sen. Murkowski’s herculean effort working with Democratic Sen. Joe Manchin to pass the first new energy bill in more than a decade is a very good step forward for Alaska and our environment. Moreover, Sen. Sullivan’s legislation working with Democratic Sens. Sheldon Whitehouse and Bob Menendez to “Save our Seas” has a direct positive impact on coastal Alaska and my family as multi-generational Alaska commercial fishermen. As an Alaska Republican, I value the bipartisan leadership we’ve seen from Sens. Murkowski and Sullivan to work across the political divide and protect the future health and sustainability of Alaska’s environment and fisheries resources.

Kodiak is an example of clean energy “best practices.” Over the past 40 years, our local utility has invested in wind and hydro power as well as maintained diesel generation backup. Now, on a yearly basis, more than 95% of Kodiak’s energy is fossil-fuel-free. We are the beneficiaries of programs on both the state and federal levels that drive down energy costs and reduce emissions. Sen. Murkowski’s Energy Act of 2020 expands these opportunities for Alaska communities and businesses by encouraging new innovation and investment, as well as expanding access to a variety of renewable energy sources that reduce greenhouse gases and support increased climate resiliency. Headlines about Sen. Murkowski opposing the federal government’s “locking up Alaska” from oil drilling and exploration, while noteworthy, may obscure the fact that she is an effective and proven advocate for progressive “clean” energy policies.

Kodiak Island, here in the Gulf of Alaska, is subject to the Japanese current moving in a counter-clockwise gyre. Our beaches accumulate an ever-increasing amount of garbage, discarded fishing gear, lost cargo and microplastics; in short, “marine debris.” Marine debris kills birds, marine mammals and a variety of fish species. It fouls Alaskans’ fishing gear, stops boat props and blocks vessel intakes, while also making Alaska’s beaches a repository of the world’s waste. As a state and a nation, we’ve been slow to recognize and respond to our marine debris problem. Sen. Sullivan understood the disproportionate impacts of marine debris on Alaska and its fishermen. He stepped into the breach and spent the last six years advocating for marine debris assessment, incentives for changing disposal practices and debris cleanup funding. The Sullivan-Whitehouse/Menendez Save our Seas Act 2.0 provides important cleanup funding for Alaska beaches and also focuses on stopping the sources of marine debris. Again, the headlines about Sen. Sullivan’s support for Alaska oil industry, while important, blur the fact that he is also the champion of significant environmental legislation.

Sen. Lisa Murkowski’s leadership on the bipartisan Energy Act of 2020 and Sen. Sullivan’s work on the bipartisan Save our Seas 2.0 Act are two examples of Alaska’s leaders stepping up to the plate on critical issues affecting our future — efforts that deserve credit, regardless of whether or not you agree with our senators on every issue. The Energy Act of 2020 and the Save Our Seas 2.0 Act have been good for the environment, good for climate change mitigation and very, very good for Alaska.