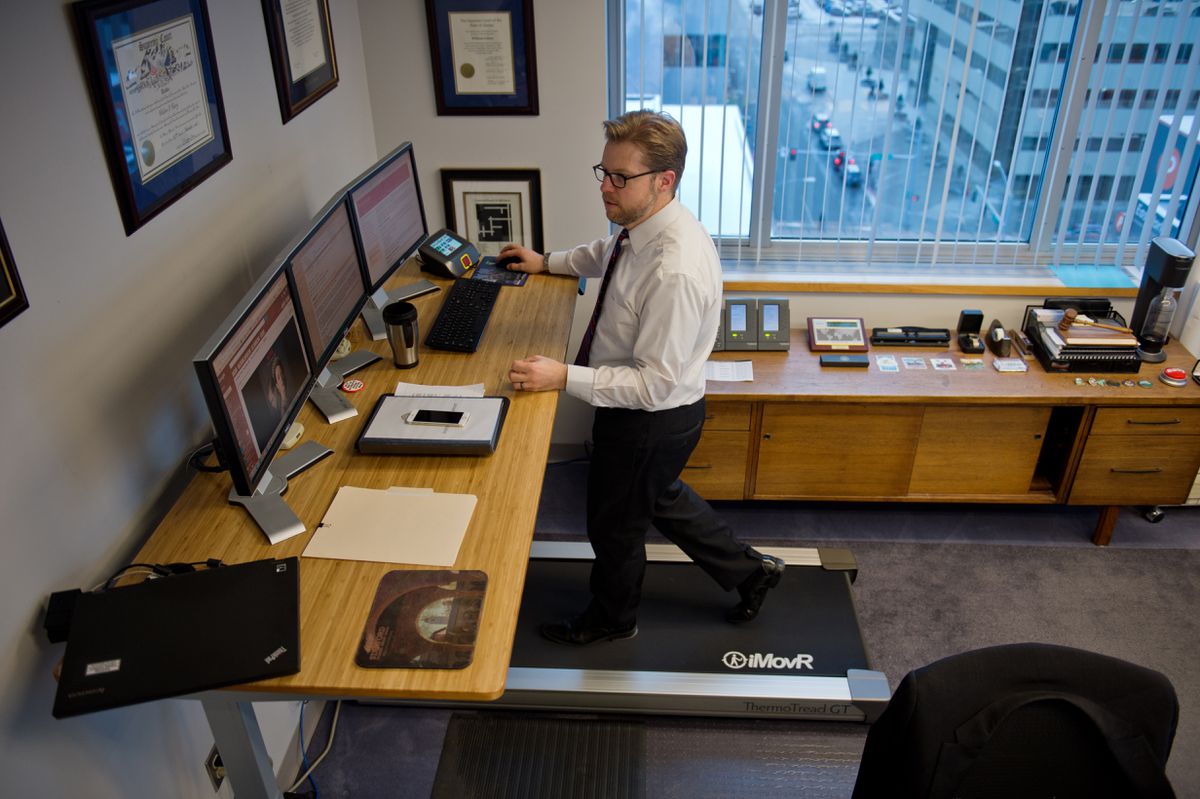 Anchorage city manager Bill Falsey walks on a treadmill while working in his office on the eighth floor of City Hall on November 30, 2017. (Marc Lester / ADN)

Anchorage city manager Bill Falsey walks on a treadmill while working in his office on the eighth floor of City Hall on November 30, 2017. (Marc Lester / ADN)

You may not have known Bill Falsey until recently, but you have benefited greatly from his work as city attorney and as city manager. He is brilliant. He is hard working. He gets the job done without fanfare, just simple competence.

Who else running for mayor can say they have already run the city? None. Who else can say they’ve run it well? None. We can go with a sure thing or we can roll the dice. We have a great opportunity this election. Bill Falsey’s the one.

You can go to Bill’s website for lists of accomplishments over the past almost six years. I have been ringside for five of those. I’ll share some things that stand out to me. He gained lots of fans with his reassuring leadership after the earthquake in 2018. We were fortunate no one died but the city was damaged: roads, homes and buildings all took a hit. Bill stood up the Emergency Operations Center and coordinated a response that is one for the textbooks. His clear competence reassured us all.

When COVID-19 threatened, he took charge of getting personal protective equipment to the front line, establishing isolation and quarantine facilities and standing up testing sites. He guided the sale of Municipal Light and Power, a huge transformation for Anchorage decades in the making. His dogged persistence chasing reimbursement for the bungled work at the Port of Alaska has gotten us to the brink of a final settlement and the start of a sensible rebuild. Hard work done well.

There were many things that few will notice but are important to the city. When a bond proposition to buy and fund several ambulances failed, Bill found another way. Working with the unions, he got more ambulances on the road by juggling existing resources. When the Alaska State Troopers pulled out of Anchorage, he figured out a simple change in code that allows the Anchorage Police Department to patrol the Seward Highway with no additional cost to taxpayers. Using federal road funds for critical roads on Anchorage’s Hillside and in Eagle River has always been considered out of reach. Bill figured out a way to make that happen. Two significant projects, one the main life-and-safety road project for the Hillside, have already started the planning process. These were done well, and with no fanfare. Good governing at its best.

Falsey has done the job and knows intimately how the city works. He has overseen most of the city’s departments, including police, fire, the civil law division, the prosecutor’s office, the health department and the office of emergency management. I saw the most challenging projects dropped on his lap. His team trusts him and he works well with others.

And he knows how to work with the Assembly. We did not always agree, but we always worked productively together. No mayor can succeed without the cooperation of the Assembly. We need a mayor who has shown they can work respectfully with the Assembly and never lose sight of the citizens and what’s best for Anchorage. For Bill Falsey, it’s not about politics, it’s about governing well.

We have an incredible opportunity now: proven, competent, smart leadership. Take advantage. Mark your ballot for Bill Falsey for mayor.

John Weddleton is a local small-business owner and member of the Anchorage Assembly.