DC delegation is a powerful trifecta for Alaska 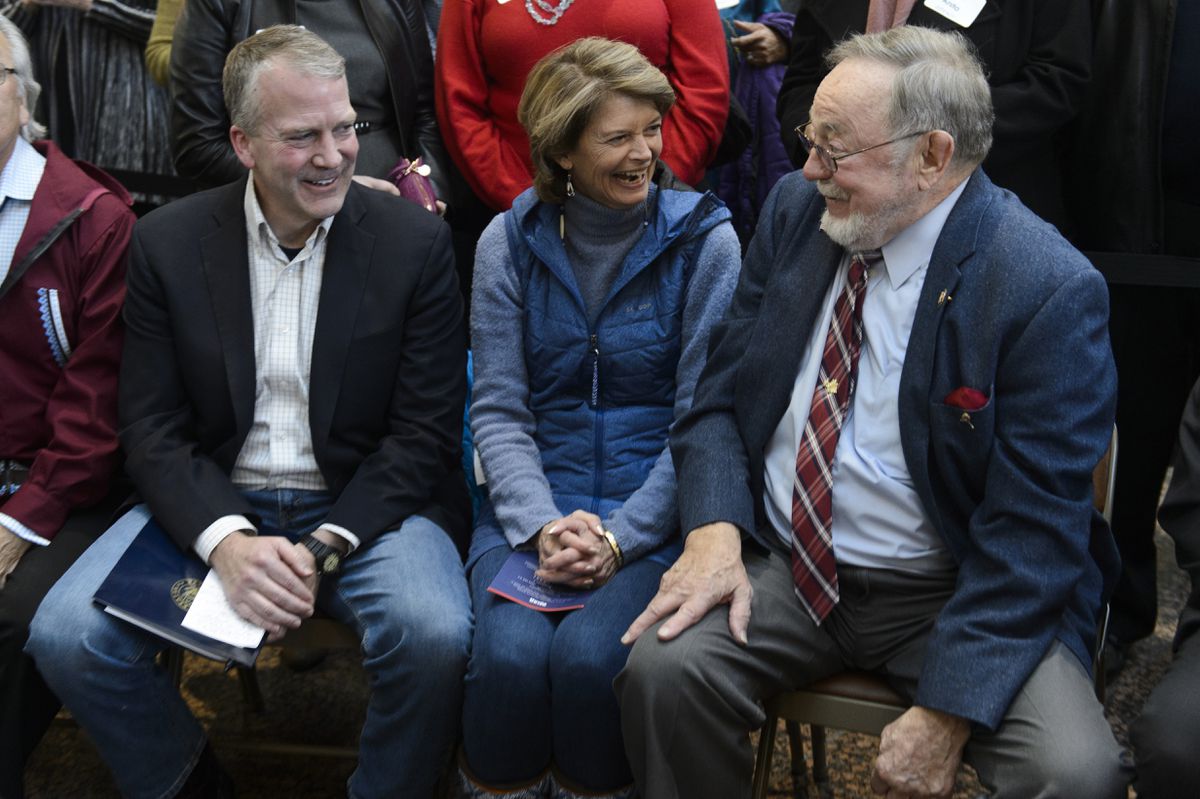 Senators Dan Sullivan and Lisa Murkowski talk with Rep. Don Young as the ceremony begins. A bronze statue of Ted Stevens was unveiled during a ceremony at Ted Stevens Anchorage International Airport on February 23, 2019. Stevens, who died in 2010, served in the U.S. Senate for 40 years. (Marc Lester / ADN)

Senators Dan Sullivan and Lisa Murkowski talk with Rep. Don Young as the ceremony begins. A bronze statue of Ted Stevens was unveiled during a ceremony at Ted Stevens Anchorage International Airport on February 23, 2019. Stevens, who died in 2010, served in the U.S. Senate for 40 years. (Marc Lester / ADN)

If Alaska wants results out of Washington, D.C, we need to keep our strongest players in the game. Luckily for us, our small but powerful congressional delegation was recently named among the top most effective senators and U.S. representatives, according to the nonpartisan Center for Effective Lawmaking out of the University of Virginia and Vanderbilt University.

In fact, Sen. Dan Sullivan was recently named the sixth-most effective U.S. senator and the most influential Republican senator on environmental policy. This recognition comes from Sullivan’s outsized role in passing legislation like the Save Our Seas Act 2.0 – a bipartisan effort to address a growing marine debris crisis – and Sullivan’s unabashed support for our Alaska-based military and Coast Guard, which has included hundreds of millions in new investments for infrastructure, vessels and aircraft across the state.

Congressman Don Young once again received high honors as the leading Republican for issues pertaining to public lands and Native Americans issues and was recognized as the representative with the longest streak of “exceeding expectations” in Congress. Young is credited for sending his Young Fishermen’s Development Act to President Donald Trump’s desk, in an effort to expand opportunities for the next generation of commercial fishermen and reverse the “graying” of our fishing fleets.

Markedly, Sen. Lisa Murkowski was named the fifth most effective U.S. senator and the most effective Republican senator on energy policy and Native American issues. Murkowski’s recognition comes after years of serving on the Senate Appropriations Committee and as the Chairman the Senate Energy and Natural Resources Committee, where she’s championed historic pieces of legislation for Alaska. These efforts included opening the 1002 Area of ANWR to responsible resource development and a sweeping public lands package that fixed longstanding issues facing Alaska Native Vietnam veterans, opened new economic opportunities for local communities, and expanded access to public lands for hunters, fishermen and other sportsmen.

Deserving even more attention was Sen. Murkowski’s recent leadership on the landmark Energy Act of 2020, which was signed into law during the final days of the Trump administration. This legislation is considered the most comprehensive update to our nation’s energy laws in more than a decade and makes important investments to America’s energy leadership, modernization and innovation across both traditional and renewable energy sources. These efforts will ultimately help drive down our nation’s energy costs, build stronger and more resilient infrastructure, and make meaningful market-driven impacts to reduce carbon emissions and lower the costly use of diesel fuel across rural Alaska.

As Congress faces its next round of big policy questions, including an important discussion on new infrastructure projects like roads, ports, bridges and energy modernization, we hope our delegation knows that their leadership is appreciated. We’re honored by their service and appreciate their meaningful work across the aisle to get big things done for Alaska. Moving forward – on critical issues like energy, national security, infrastructure, and rebuilding our economy – our delegation has clearly proven they have the seniority and gravitas to effectively fight for Alaska.

Carol Ashlock is a longtime Alaska businesswoman who is supportive of effective representation on issues important to Alaskans.