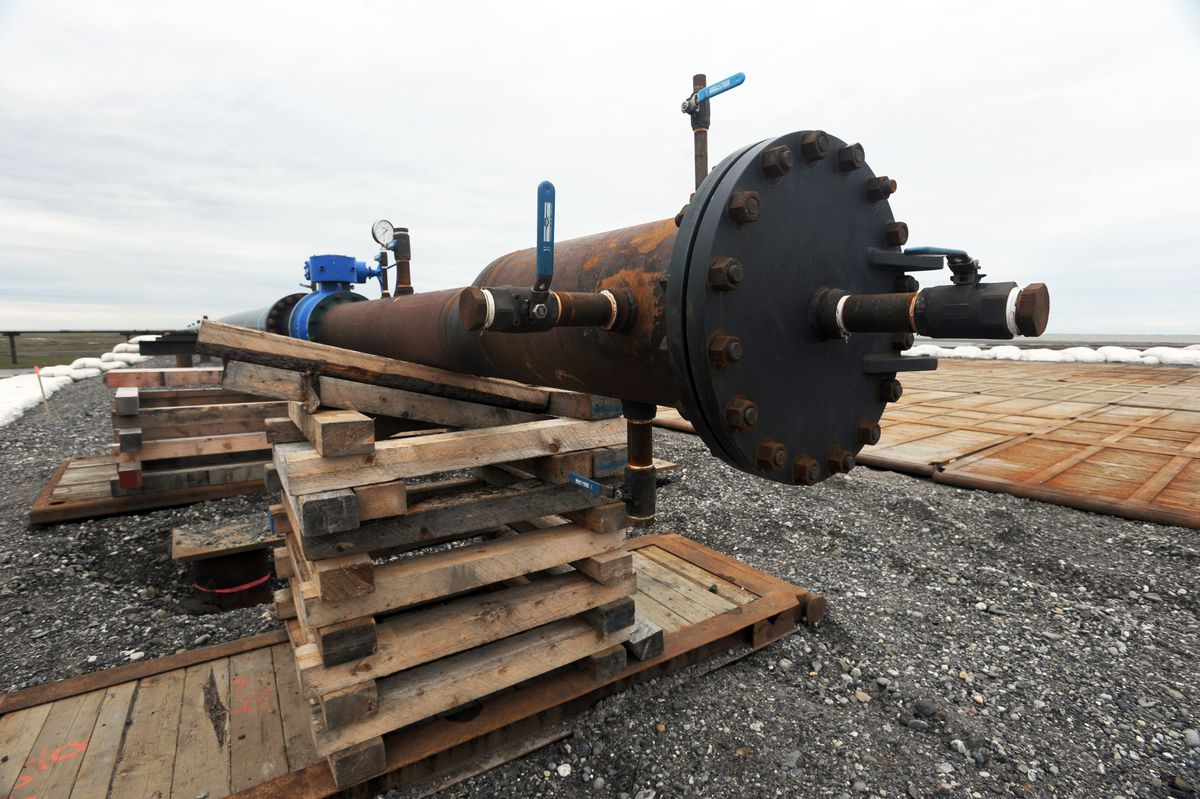 A 22-mile pipeline built to connect Point Thomson with existing North Slope infrastructure at the Badami field to the west awaits connection to production facilities on Thursday, July 31, 2014, at Point Thomson Project. The pipeline to carry condensate liquid stripped from natural gas was built by Doyon Associated LLC, a subsidiary of Doyon Ltd. of Fairbanks.

A 22-mile pipeline built to connect Point Thomson with existing North Slope infrastructure at the Badami field to the west awaits connection to production facilities on Thursday, July 31, 2014, at Point Thomson Project. The pipeline to carry condensate liquid stripped from natural gas was built by Doyon Associated LLC, a subsidiary of Doyon Ltd. of Fairbanks.

Alaska’s $6 billion “half-LNG” project, i.e. the North Slope conditioning plant and 500-plus miles of pipeline, but no liquefaction or exports, will never be funded unless the Biden administration and Congress realize that energy security may be an issue in the future. The Texas electric power crisis and two previous California crises over the last 20 years show unambiguously that any renewable energy strategy without plenty of natural gas backup systems can fail spectacularly. So, the question is, are America’s natural gas supplies adequate?

Recall, back in the early 2000s, Alaska was negotiating the creation of a natural gas pipeline from the North Slope to Alberta, Canada, connected to the Lower 48, because Lower 48 natural gas prices spiked. From the year 2000 until about 2010, U.S. natural gas prices were about double or triple what they had been before 2000, and indeed did not significantly decline until 2014. It was after the mid-2000s that shale gas and then shale oil came on the scene and finally pushed natural gas prices, and indeed oil prices, back down to 1990s real prices — about $4 per mcf in today’s dollars. Currently, with a recession, those prices are even lower. Still, during those high-priced years, there were huge plans, as sourdoughs will remember, to take that North Slope natural gas to market via a pipeline to Canada and then on to the Lower 48.

But more than that, the U.S. was even planning on importing liquefied natural gas (LNG) in order to help reduce natural gas prices and satiate the Lower 48 markets. We almost saw a congressional act pass to guarantee a minimum price on Alaska North Slope natural gas, which could have ensured Alaska natural gas made it to the Lower 48. Now, however, with shale gas all over the Lower 48, the talk has changed from natural gas shortages to how the U.S. will be a major LNG exporter for decades to come. But wait.

Consider what is happening to U.S. shale oil. U.S. shale oil was close to a peak in production even before the pandemic. Not only that, but there is no current expectation that shale oil will increase its production above 2019 levels. A nuanced analysis shows that in June 2018, shale oil drilling rig numbers stopped increasing, even though oil prices were still going up at that time. Indeed, the closest link between oil rig changes and oil prices occurs with a 25-week lag, where that price was increasing very strongly at the point where oil-shale drilling rig increases suddenly plateaued. Moreover, the industry says it had trouble financing such projects, but junk bond yields were declining in 2018 and 2019. This suggests scarcity, not finance, was the real concern.

While shale oil and shale gas can be cost-effective to find, both products are also cost effective to drain and drain fast. And unlike large conventional sources of oil and gas that reside in rather large reservoirs, shale oil and shale gas reside in small cracks of rock and are quickly drained — not just for a single well, but also for entire regions. Like shale oil, shale gas could soon be limited. Were that to occur, instead of a net exporter of energy, the U.S. could soon find itself becoming a net importer of both oil and natural gas energy. Then, just like the natural gas shortages and price spikes of the early 2000s, the many renewable systems around the U.S. could be placed in jeopardy. So, the point is, a large U.S.-backed Alaskan, “half-LNG” project could help provide the U.S. with a lot more energy security than meets the eye.

Doug Reynolds, Ph.D. (economics), lives and works in Fairbanks and has studied Alaska’s and the world’s oil and gas industry for more than 20 years. He can be contacted at ffdbr@yahoo.com.