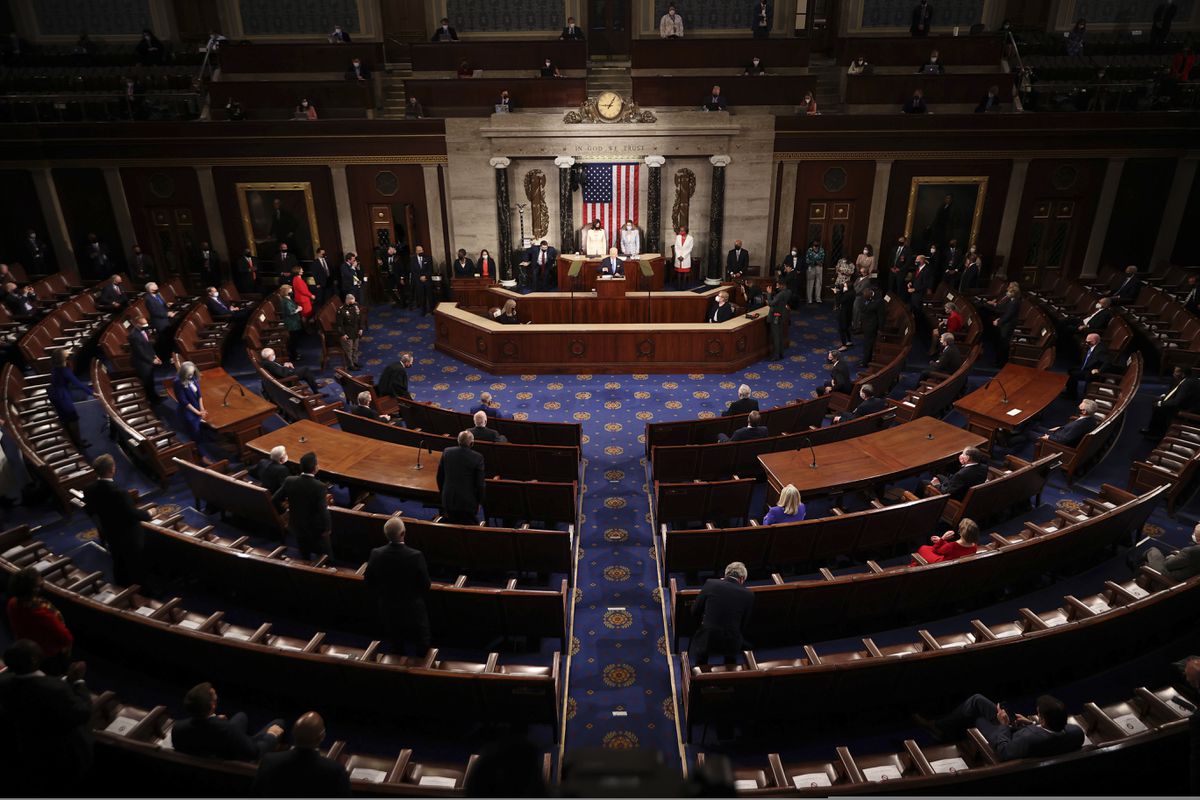 FILE - In this April 28, 2021, file photo President Joe Biden addresses a joint session of Congress in the House Chamber at the U.S. Capitol in Washington. Biden has moved into a new phase of his presidency, having already begun to face a historic series of crises and largely dedicating his first 100 days to steady a nation reeling from the COVID-19 pandemic that has killed nearly 570,000 Americans and devastated its economy. (Chip Somodevilla/Pool via AP, File)

FILE - In this April 28, 2021, file photo President Joe Biden addresses a joint session of Congress in the House Chamber at the U.S. Capitol in Washington. Biden has moved into a new phase of his presidency, having already begun to face a historic series of crises and largely dedicating his first 100 days to steady a nation reeling from the COVID-19 pandemic that has killed nearly 570,000 Americans and devastated its economy. (Chip Somodevilla/Pool via AP, File)

After the terrible devastation COVID-19 wreaked on Alaska’s economy the past year, the one area where Alaska’s elected officials at all levels and of all political parties should reach agreement is getting our economy back on track.

The pandemic has killed more than 300 Alaskans and infected nearly 70,000 more, cost thousands of our fellow citizens their jobs, pushed many into poverty and bankrupted scores of small homegrown businesses.

Thankfully, the new administration of President Joe Biden has stepped forward with a comprehensive “Build Back Better” plan to create jobs and invest in America’s infrastructure – roads, bridges, water and sewer – after too many years of neglect. While disagreement about some of the details is expected, our political leaders should unify behind the notion that these facilities sorely need repair and creating millions of American jobs to fix them is exactly what our economy needs now.

Alaska stands to benefit enormously from this historic investment, if we focus on the right priorities. We welcome federal dollars to improve our roads, bridges, housing and sanitation systems, especially in rural Alaska. Major investments in two areas are vital for our state’s long-term prosperity. The first is rebuilding the Port of Alaska, through which most of the state’s fuel and goods are shipped. Second is expanding internet broadband across rural Alaska, essential for public health and future jobs.

America is woefully behind other countries when it comes to investment in our basic transportation and public facilities. Although the world’s richest nation, the U.S. ranks 13th in the overall quality of our infrastructure. Our roads are crumbling, our energy systems are vulnerable to catastrophic outages, and too many Americans lack access to affordable, high-speed internet. Alaska’s infrastructure is equally failing.

Right now in Washington, D.C., the Biden administration and Congress are starting the debate over the details of what the president is calling “The American Jobs Plan.” This $2 trillion investment over eight years will upgrade our infrastructure, revitalize manufacturing, invest in basic research and science and shore up supply chains. It will be fully paid for within the next 15 years by making sure the wealthiest Americans and U.S. corporations pay their fair share in taxes.

Now is the time to ensure Alaska’s priorities are included in the legislation, starting with the Municipality of Anchorage-owned Port of Alaska. Fuel and freight consumed by 90% of Alaska’s population comes through the port, which is also vital to the nation’s defense.

Opened in 1961, the aging facility suffered significant earthquake damage in 2018. Its dated docks and pilings continue to deteriorate. Improving the port’s safety and upgrading its operations for the foreseeable future requires an investment of $1 billion or more.

Alaska’s other top priority should be bringing high-speed internet to all our rural communities, dispersed across a territory nearly one-fifth the size of the Lower 48. City-dwelling Alaskans know how vital the internet is to their children’s education, connections with medical providers and for jobs.

Nearly a decade ago, a state report called for comprehensive broadband available to Alaska households and businesses by 2020. While progress has been made with isolated connections to some communities, lack of high-speed internet leaves much of Alaska behind.

Biden’s proposal calls for $100 billion for rural broadband. Alaska deserves a significant share of that amount to bring all our communities into the 21st century.

We were heartened that Alaska’s sole congressman, Rep. Don Young, was invited to the Oval Office by President Biden on April 12 to kick off consideration of the Biden proposal. Sixteen years ago, Young set a record when he helped push through Congress a $300 billion infrastructure bill, a fraction of Biden’s proposal.

Both Young and U.S. Sen. Lisa Murkowski have indicated Alaska could benefit from such an investment in public facilities. The Administration and all three members of the congressional delegation need to hear from Alaskans now that The American Jobs Plan is vital for Alaska’s post-COVID recovery and future prosperity.

Build Back Better, Alaska (B3AK) is a 501(c)3 educational non-profit corporation that provides information and outreach on issues of national and Alaska interest, founded by volunteers with the Alaskans for Biden-Harris effort to carry forward the energy from 2020. B3AK aims to supply information and education about federal policies and initiatives affecting Alaska and create opportunities for dialogue between decisionmakers and Alaskans. B3AK promotes good governance, public engagement, and civic participation.