Alaska should encourage national investment in a national-interest gas line 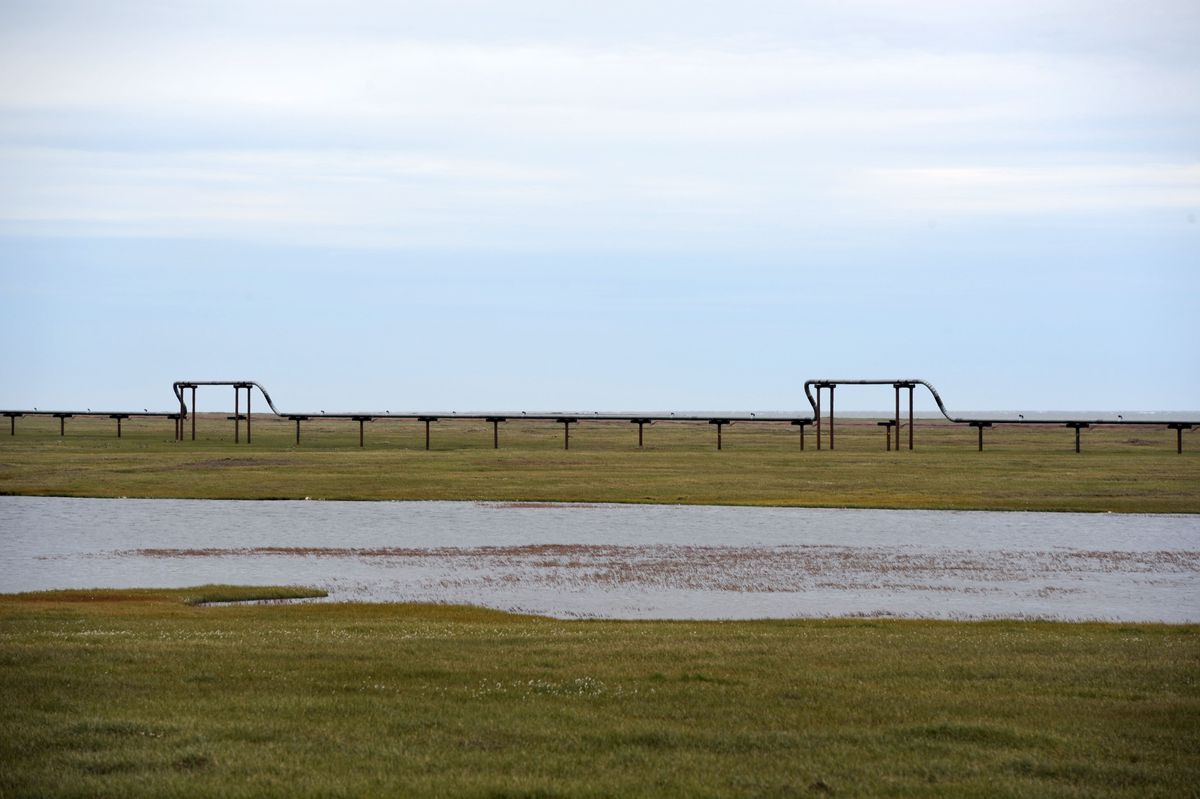 A 22-mile pipeline built to connect Point Thomson with existing North Slope infrastructure at the Badami field to the west crosses two streams near the Central Pad on Thursday, July 31, 2014, at Point Thomson Project. The pipeline to carry condensate liquid stripped from natural gas was built by Doyon Associated LLC, a subsidiary of Doyon Ltd. of Fairbanks.

A 22-mile pipeline built to connect Point Thomson with existing North Slope infrastructure at the Badami field to the west crosses two streams near the Central Pad on Thursday, July 31, 2014, at Point Thomson Project. The pipeline to carry condensate liquid stripped from natural gas was built by Doyon Associated LLC, a subsidiary of Doyon Ltd. of Fairbanks.

Much in the news, of late, has been reporting on the latest twist in the trans-Alaska natural gas pipeline saga, with Frank Richards, president of the Alaska Gasline Development Corporation, speaking quite optimistically about the project and Larry Persily, former federal coordinator for Alaska natural gas transportation projects, sounding utterly fatalistic. Reflecting on this long-running debate, it occurred to me they may each be both right and wrong by turns — and that a middle path (a smaller, more domestically oriented and strategically focused project that spurs on and leverages other nationally needed projects) might actually be an achievable one.

For decades, Alaskans have been dreaming of a way to replicate TAPS – the Trans-Alaska Pipeline System – with Alaska’s North Slope natural gas. This “TAPS Two” would be, like the oil-filled original TAPS, a very large, export-oriented project primarily focused on bring maximized monetary returns to private and public investors, as well as the state of Alaska. Successive governors have tried get that massive, hugely expensive project off the ground but, to date, none have been successful.

Today, Mr. Richards is looking to jump-start that project (requesting “only” $6-8 billion in federal grant dollars to construct only half the pipeline, limited gas processing and no Cook Inlet LNG production facility – 25% of the total money to construct 25% of the total project to go, from a national perspective, absolutely nowhere) but, really, the underlying project is the same as it’s always been.

For his part, Mr. Persily thinks the chances of this happening are pretty well nonexistent, and it isn’t hard to see why: Alaska is essentially asking the federal government to subsidize profit-seeking by the “big oil” North Slope producers (companies whom the administration and the congressional majorities see as simultaneously existential environmental threats and woefully under-taxed) and a hostile-power foreign investor (China – whom both Democrats and Republicans recognize as a strategic threat).

But what if we moderated our expectations and asked for a differently configured and focused project?

Despite the Air Force and Army’s new “Take Back Dominance in the Arctic” strategies, the reality is that America needs to “take it back” because, compared to Russia, which has been building up its Arctic assets and capabilities for over a decade, we’re well behind the curve. To catch up, America will need to keep and build on what it has – including a fort and base in Interior Alaska that have already been looking to upgrade their heat and power systems.

Compound this with China’s recent muscle flexing regarding strategically / industrially critical and rare-earth minerals (over which they have overwhelming market control) and a second uncomfortable reality sets in: Even in the best of times, America’s supply lines for these indispensable commodities is long, tenuous and highly vulnerable to inadvertent or purposeful disruption.

But Alaska’s huge endowment of mineral resources, if developed in tandem with its energy ones, can appreciably improve this strategic profile:

Fairbanks Economic Development Corporation’s Energy for All Alaska Task Force recently received a presentation from Steve Masterman, state geologist and head of Alaska’s Division of Geological and Geophysical Surveys. In it, Masterman highlighted the division’s work relative to Alaska’s critical and rare earth minerals. Not just what we have and where they are, but what they’re used for, their potential for economical development in our state, and what it would take to move those resources into production and perhaps even refinement. You can watch a recording at FEDC’s website.

So what if instead of asking the feds to subsidize, to non-completion, a massive project primarily focused on satisfying parochial, private and foreign interests, we offer them this:

• Facilities, using American soil - on American soil, providing preliminary processing (and maybe even advanced separation and refinement) of critical and rare-earth minerals; and

• An Alaska-to-Alberta rail link moving those mission-critical commodities securely and cost-effectively through an ally to the contiguous U.S.

All for the same or less money than the historic Alaska pipe-dream.

I don’t know if the Biden administration and Congress would be interested in such a pitch and project, but I do think it’s a concept worth pursuing. Certainly, it appears a gas line dream more likely to be achieved than “TAPS Two,” and a value proposition more beneficial to the nation and Alaska if it is.

Jomo Stewart is a project manager for the Fairbanks Economic Development Corporation.

Jomo Stewart is the energy project manager for the Fairbanks Economic Development Corporation. He is a graduate of the University of Alaska Fairbanks with a degree in political science and a former chief of staff and committee aide in the Alaska State Legislature.