Remembering Tom Fink, an old-school Alaska conservative as constant as the North Star 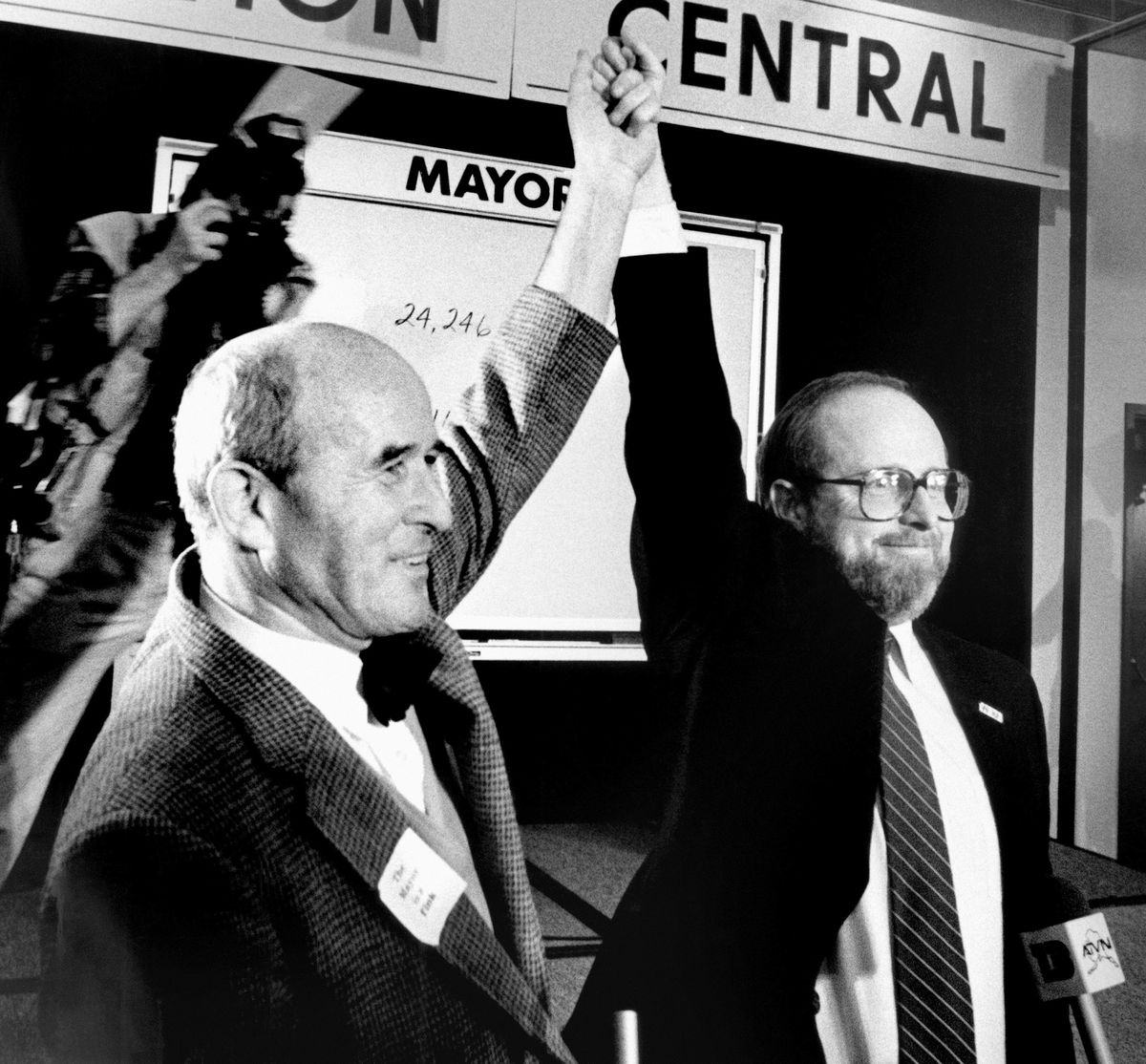 FILE - In this Nov. 3, 1987, file photo, Republican Tom Fink, left, celebrates after winning the runoff election in Anchorage, Alaska, for Anchorage mayor by more than 7,000 votes. Fink is with Democrat Dave Walsh, who conceded the election about two hours after the polls closed, holding Fink's arms up in a victory salute. Fink, a former speaker of the Alaska House of Representatives who later became mayor of Anchorage, has died. He was 92. Fink died of "complications from old age," his son, Josh Fink, said on Saturday, June 5, 2021. (Randy Belinsky / Associated Press archive)

FILE - In this Nov. 3, 1987, file photo, Republican Tom Fink, left, celebrates after winning the runoff election in Anchorage, Alaska, for Anchorage mayor by more than 7,000 votes. Fink is with Democrat Dave Walsh, who conceded the election about two hours after the polls closed, holding Fink's arms up in a victory salute. Fink, a former speaker of the Alaska House of Representatives who later became mayor of Anchorage, has died. He was 92. Fink died of "complications from old age," his son, Josh Fink, said on Saturday, June 5, 2021. (Randy Belinsky / Associated Press archive)

Illinois Sen. Everett Dirksen once told his constituents, “I am a man of fixed and unbending principles, the first of which is to be flexible at all times.” Tom Fink, who died recently at 92, was born perhaps 20 miles from Dirksen, but apparently, the two never drank the same water. As a candidate and an elected official, Tom Fink was as flexible as an I-beam.

Fink’s steely principles were both his doing and his undoing. Neither friend nor foe could say Fink’s beliefs, motives and intentions were unknown to them. In a profession — politics — where duplicity, disingenuousness, and disinformation are often rewarded, Tom Fink was the ultimate stand-up guy. You knew where he stood, no matter what you thought of the terrain he occupied. He was conservative, Catholic, a proud believer in capitalism, limited government and the gospel of individual opportunity.

Fink came to Anchorage from Illinois in the 1950s expecting to become a frontier lawyer, a member of the generation that included Ted Stevens, John Rader, Cliff Groh, Charlie Cole and Roger Cremo. But he quickly got into a dispute with the local bar association and the territorial attorney general, a disagreement a young would-be lawyer without a license could not win. Perhaps this run-in did not define him as an Alaskan, but it certainly set a tone that echoed through almost 40 years in public life. He was a man in opposition — even when in the majority.

With a growing family to support, Fink turned to business. I am told he had a variety of interests, but I knew him as an independent insurance agent. My father-in-law was an agent in Rochester, N.Y., so I had something of an appreciation for the opportunities and burdens of the profession. The money doesn’t come easy. I suspect Fink benefited from his reputation for rectitude. The salesman who tells it like it is gets respect — even if the client won’t close the deal.

In my youth, it seemed Tom Fink was always running for something. He served 10 years in the state House, rising to speaker in his last term. When he first arrived in Juneau in the mid-1960s, the Legislature struggled to pay the bills so his view of limited government often prevailed. By the time he left in the mid-1970s, oil money from Prudhoe Bay had begun rolling in and tight-fisted Republicans were an unhappy minority. Big Government was on a roll.

Fink resigned from the Legislature when a campaign reform law required him to publicly list his insurance clients. He saw resignation as a matter of principle.

In 1982, he won the GOP nomination for governor, bidding to succeed Jay Hammond. Fink pledged fealty to the Anchorage Chamber of Commerce and the Alaska Association of General Contractors — as Republicans except for Hammond did — but his central issue was the capital move. Both Fink and a ballot proposition to move the capital from Juneau to southcentral Alaska failed. Democrat Bill Sheffield became governor — in Juneau.

It should be noted that Fink got the fervid but not large anti-abortion vote. And he was no friend of the Alaska Permanent Fund. He thought governments should not have saving accounts. Surpluses were to be spent, or never created in the first place.

In 1986, Fink ran for mayor of Anchorage and won. He also won re-election, presenting a vivid contrast with liberal predecessor Tony Knowles. He took office in the middle of an economic downturn which was especially hard on the housing industry and banking, and presided over a municipal government with modest aspirations. But his inflexible principles made him the center of controversy a number of times. He seemed to be especially offended by anything that hinted gays had rights beyond the right to shut up, and he battled the Anchorage Daily News in court over access to public records, losing repeatedly.

Fink rarely called the editorial board to complain about editorials — or cartoons. He seemed to think it wouldn’t do any good. Why bother? Other politicians bothered enough to make my ears ring.

I got to know him better after he retired from public life. He and I, on occasion, would have breakfast and exchange stories. He was very good company. For all the scars he suffered in political battle, he seemed to have no desire for retribution. He thought his critics were wrong, but he didn’t think they were his enemies. Eventually, I had breakfast with his old-timers group (Fink’s former House colleague Bill Parker called them “the flat-Earth society”) and, over eggs, received a detailed recitation of the mistakes I had made over the past 30 years, done with good humor.

The last time I talked to him, he was still pursuing one of the issues important to him in much younger days — getting the state to fund parochial education. I wasn’t much help.

Tom Fink seemed such a straight arrow on a predictable path that I wondered, “Doesn’t the guy have any quirks?” I got my answer one Fourth of July when working on an editorial for the following day. I needed to hear his side of an issue, so I called him at home. His wife Pat answered and said, “Tom? Let me go find him.” While she was gone, I could hear Bing Crosby singing “White Christmas.” I thought “Who plays Christmas music on the Fourth of July?” Pat never found Tom. When she returned to the phone, I asked about Bing Crosby. “Oh, Tom loves Christmas music,” she explained.

Made me wonder: Did he juggle his holiday music year round and listen to “The Stars and Stripes Forever” on Christmas Eve — after returning home from Mass?

Michael Carey is an occasional columnist and the former editorial page editor of the Anchorage Daily News. He can be reached at mcarey@adn.com.