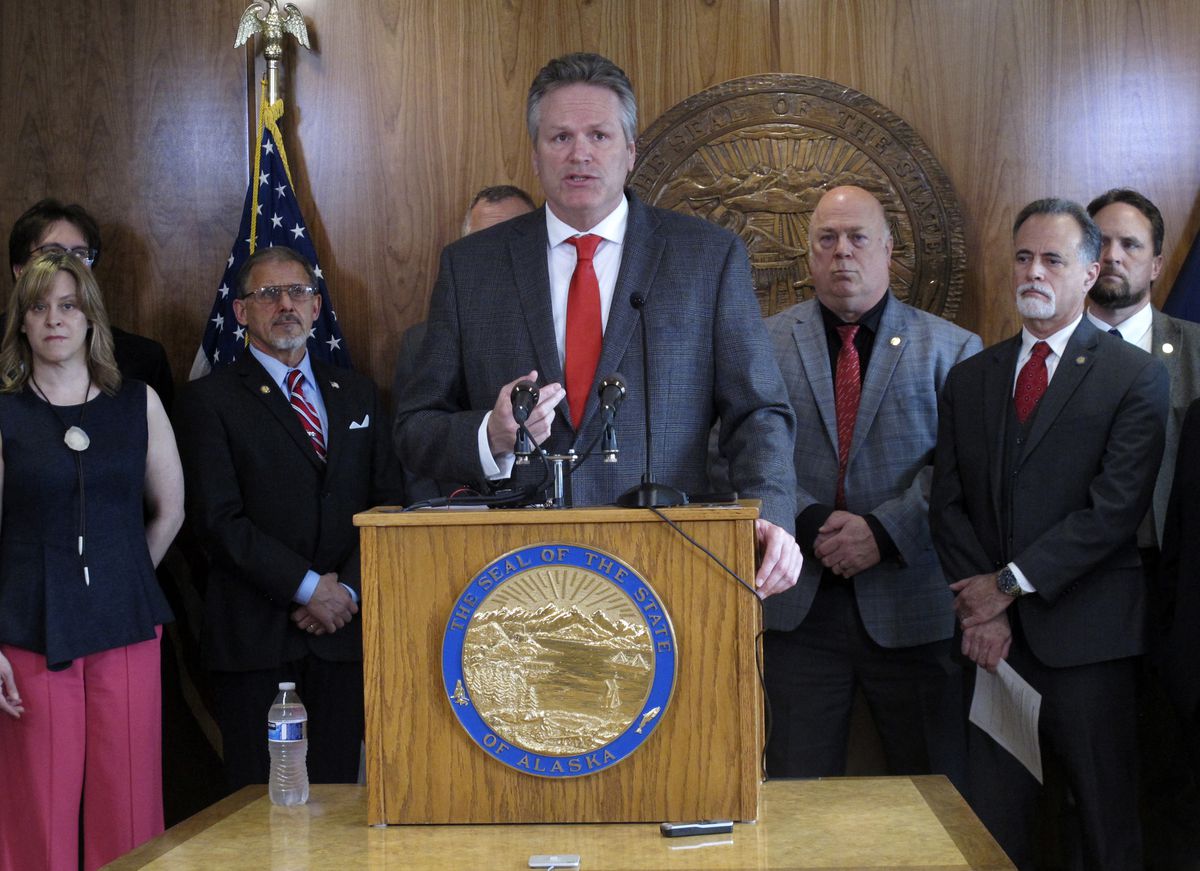 Alaska Gov. Mike Dunleavy speaks during a news conference on Wednesday, May 12, 2021, in Juneau, Alaska, with a number of state legislators around him. Dunleavy discussed a proposed constitutional amendment dealing with the Alaska Permanent Fund and the Permanent Fund Dividend. (AP Photo/Becky Bohrer)

Alaska Gov. Mike Dunleavy speaks during a news conference on Wednesday, May 12, 2021, in Juneau, Alaska, with a number of state legislators around him. Dunleavy discussed a proposed constitutional amendment dealing with the Alaska Permanent Fund and the Permanent Fund Dividend. (AP Photo/Becky Bohrer)

I’ve never been a fan of the Permanent Fund dividend, and watching from the nosebleed seats as budget-battered lawmakers wrestle — yet again — over what to do with it makes the notion of enshrining it in the Alaska Constitution even less appealing.

Let’s face it, the dividend was a nifty idea in the early 1980s, when it was billed as a way to spur public support and vigorous protection of the state’s then-new oil wealth savings account from hordes of rapacious politicians incessantly, endlessly turning over couch cushions in search of loose money to squander.

But the payout quickly took on a life of its own, morphing into a political third rail as Alaskans grew accustomed to dividend-fueled Hawaii vacations, large-screen televisions and money for nothing. Over the years it morphed into a vast, crippling entitlement and a budgetary cudgel affecting almost every facet of government.

It is easy to understand the urge to shield the dividend in the Alaska Constitution to ensure an annual payout and protect it from free-spending politicians only too eager on simple majority votes to use its earnings to plug budget gaps caused by their profligate spending.

The protection was, in fact, one of the first things Gov. Mike Dunleavy proposed after his election. Today, it awaits further legislative action as Senate Joint Resolution 6, a wide-ranging structural change to the Permanent Fund. It would, among other things, ensure a 50-50 annual split of the annual draw on Earnings Reserve Account funds between dividends and government operations. It also would roll the Earnings Reserve, holding about $14 billion, into the fund’s corpus and deposit the Power Cost Equalization endowment fund’s $1 billion into the corpus, as well.

SJR 6′s passage will require two-thirds support in each legislative chamber to win a spot on the November 2022 ballot, and there is much debate in the Legislature about the need for a long-term fiscal plan, which necessarily must include the Permanent Fund dividend.

Mind you, the system we had for years, with a statutory calculation in place to decide a roughly 50-50 division of the fund’s earnings for dividends and government, worked well until former Gov. Bill Walker — up to his hips in red ink — in 2016 vetoed about half the $1.4 billion appropriated by the Legislature for dividends.

A lawsuit challenged the governor’s veto authority over money set aside for dividends. The Alaska Supreme Court ruled dividends are a legislative appropriation subject to gubernatorial veto. The Legislature followed Walker’s lead and ignored the formula over the next four years, reducing dividends by simple majority votes, stoking the fires of dividend protectionism.

Count me squarely among those who viscerally adore the idea of free loot and wasting it in a fashion that would make a drunken sailor blush. But, no matter how much fun it might be, we must recognize that is the short game. The long game is an Alaska that pays its bills, has better-than-barely passable roads, more parks and a first-class education system. It means fielding enough state troopers to provide law enforcement to all Alaskans, many of them still awaiting the arrival of running water and flush toilets.

Yes, indeedy, dividends are swell, but Alaska also has constitutional obligations, such as funding retirees and education. In lean times, you have to wonder: Would an enshrined dividend with its own formula have priority above retirement pay or education funding, neither of which have a constitutionally mandated spending formula? Yes it would, as proposed by the governor. Is that what we really want in what primarily is a one-industry state where revenue has more ups and downs than Bill Clinton’s trousers?

Make no mistake, an enshrined dividend would serve only to deny options in troubled times, and, at some point down the road, would prove fiscally catastrophic to Alaska.

Though the Permanent Fund has been recast over the years as the Permanent Dividend Fund, it did not start out that way when Alaskans created it in 1976. The new fund was to receive “at least twenty-five percent” of the state’s mineral income to use for “income-producing investments specifically designated by law as eligible for permanent fund investments. All income from the permanent fund shall be deposited in the general fund unless otherwise provided by law.”

Doling out dough annually to individual Alaskans clearly was not the intent when Alaskans went to the polls those long years ago.

The answer to ensuring a dividend, if we must have one, is not to lock it up in the constitution. The answer lies in electing public officials and lawmakers who will follow the law and common sense, especially in troubled fiscal times — and punishing them at the polls when they do not.

From the nosebleed seats, that seems to make the most sense.