Veterans have shaped Alaska through their service 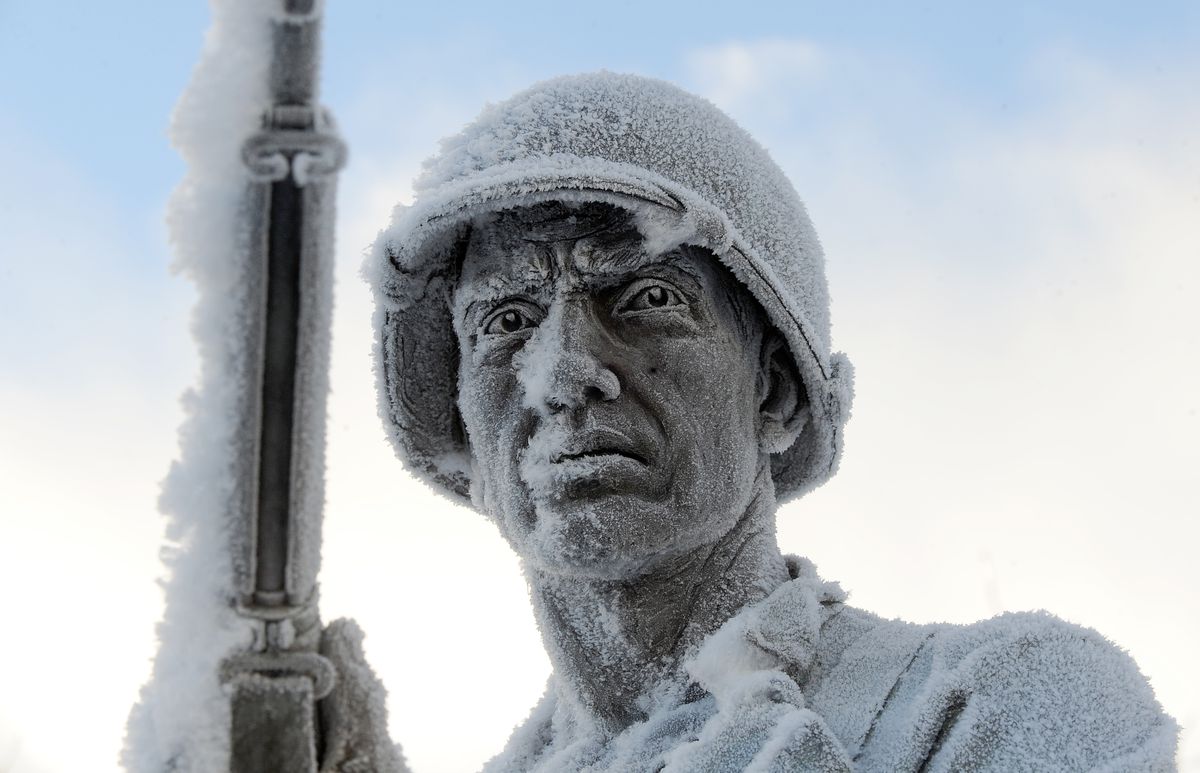 Frost covers the statue of a soldier at the Anchorage Veteran’s Memorial on the Park Strip in Anchorage on Dec. 28, 2017. (Bob Hallinen / ADN archive)

Frost covers the statue of a soldier at the Anchorage Veteran’s Memorial on the Park Strip in Anchorage on Dec. 28, 2017. (Bob Hallinen / ADN archive)

A century ago this weekend, the "war to end all wars" came to its official end in a rail car in Europe, taking effect at the 11th hour of the 11th day of the 11th month of 1918. Known as Armistice Day, the event became an official U.S. holiday to remember the contributions of those who had fought in the war, and in 1954, President Dwight D. Eisenhower expanded its scope to commemorate the service of all U.S. veterans, renaming it Veterans Day.

Since the days of the American Revolution, the U.S. has owed a great debt to its service members, one not quantifiable in any list of victories or policy accomplishments. An incredible 16.1 million U.S. veterans are alive today who have served in at least one war, from World War II to Afghanistan. Alaska has the highest number of veterans per capita of any U.S. state; one in 10 Alaskans is a veteran.

Alaska has always depended heavily upon the contributions of veterans — even before its military infrastructure was expanded during World War II, the first World War was a massive influence on the territory. When the U.S. signaled it would join the war effort in Europe, many of the young men who worked on small mining claims in Alaska went Outside to enlist. A total of 10,000 Alaskans enlisted, some of whom died in service to their country. Others perished in the Spanish flu pandemic of 1918, and some never returned to Alaska upon completing their service. The combined effect of the war and the flu devastated the territory, decimating some towns and accelerating the move toward corporate mining.

The story of veterans in Alaska can't be told in numbers. It's better expressed in stories like that of Alaska-born Medal of Honor recipient Archie Van Winkle. A staff sergeant in the Korean War, Van Winkle and his unit came under attack by a larger North Korean force. He "boldly spearheaded a determined attack through withering fire," Van Winkle's citation reads, going on to say that "though he and all the others who charged with him were wounded, (he) succeeded in enabling his platoon to gain the fire superiority and the opportunity to reorganize." Wounded in the arm and chest from enemy fire and a hand grenade, "he staunchly refused evacuation and continued to shout orders and words of encouragement to his depleted and battered platoon."

Alaska has ties to other Medal of Honor recipients with similarly harrowing stories — Drew Dix, who earned his medal as a staff sergeant in Vietnam, finished his service at Fort Wainwright in Fairbanks and retired in the Interior, where he still lives. And medical sergeant Ronald J. Shurer, born in Fairbanks, was awarded the Medal of Honor earlier this year for his heroism in a 2008 battle in which he saved the lives of four critically wounded U.S. soldiers and 10 injured Afghan commandos until teammates arrived.

Casualty counts have fallen in recent conflicts as the U.S. military shifts to tactics and technology that limits exposure of large masses of troops to enemy fire. But in some regards, war never changes. Our understanding of the effects of combat service on veterans is increasing, but we still suffer major deficits in our ability to treat not just physical wounds but also post-traumatic stress disorder and the psychological burden of war. We must continue to do better for those who have done their best for us.

A century after the "war to end all wars," it's clear that war has not and will not end, despite our continuing, essential pursuit of that goal. Whether their service is performed fighting the wars we cannot avoid or deterring the ones we can, America's veterans are owed a great debt by our nation, and one that we should remember on this day and all others.