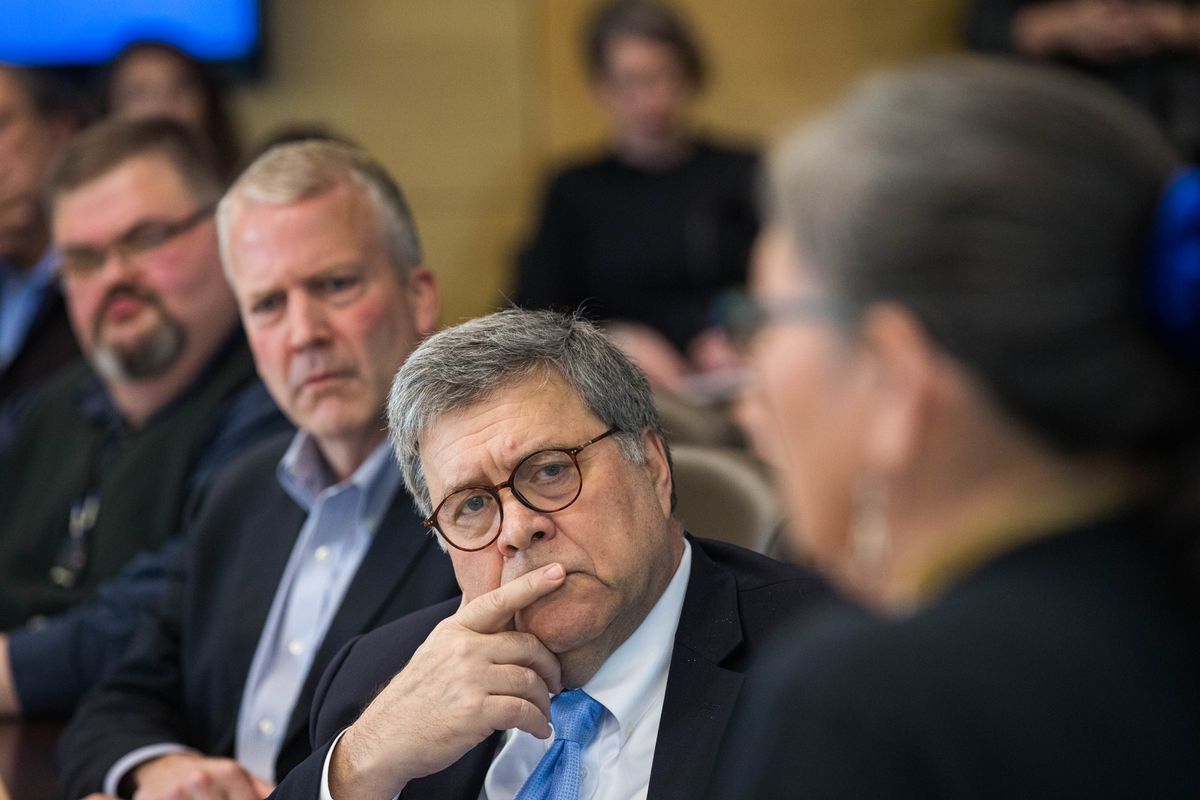 In a whirlwind trip to Alaska communities, including some off the road system, U.S. Attorney General William Barr made Alaska the first state he’s officially visited since being sworn in to his position in February. In a Wednesday meeting in Anchorage, he heard dire stories from Alaska Native community representatives from across the state. Participants in a roundtable discussion told him about tragedies they and their family members had experienced, and the delays or denials they had experienced in dealing with the justice system. One told Barr that in her region’s 48 communities, there are exactly six law enforcement officers.

It’s an auspicious time for a visit from the top justice official in the United States. A recent ADN report brought to light the shocking lack of law enforcement in communities off the road system, with one in three communities across the state having no police protection whatsoever. Reporting on the issue has brought definition to a longstanding problem in Alaska: the sense that, especially in communities far from urban centers, the justice system in our state is failing.

The news that one in three Alaska communities has no police is shocking enough. What is more shocking than that number are its implications and the stories of those who have experienced its effects. Leonard Wallner, a coordinator of the village safety officer program, related a case in which residents hid inside their homes — for an excruciating 23 hours — until troopers could arrest a murder suspect who was walking the streets. In the U.S. in 2019, this is an unacceptable state of affairs.

Attorney General Barr, to his credit, appears to agree. He promised to review federal policies governing Alaska Native law enforcement and see what help might be possible from Washington, D.C. He told those in attendance at Wednesday’s roundtable meeting that he would follow up on their concerns specifically. And he visited rural communities firsthand rather than simply making an in-and-out visit to Anchorage. All of these are signs that he is taking the issue seriously and will try to make real progress to address it.

But even with the best of intentions, Alaska’s far-flung communities have been here before. Rural Alaskans have seen earnest promises to bring justice closer to home and make it feel more equitable. They’ve seen roundtable discussions and blue-ribbon panels. They’ve seen action plans and political campaigns that promised they wouldn’t be forgotten about, neglected or left behind. What they haven’t seen are solutions that would help them turn the corner on some of the worst rates of domestic violence and sexual assault in the nation. They haven’t seen trials in serious cases in their communities before juries of their peers, something those of us in larger population centers take for granted. In many places, they haven’t seen a police officer they can call who will respond immediately when their neighbor threatens them and fires a gun in the air.

To be clear, it’s not just the federal government with a responsibility to do better at providing justice for Alaska’s communities. The state and municipalities, where they exist and have police powers, have major roles to play as well. They too are culpable for the failings of justice that have made wide swaths of the state feel lawless. But the federal government has shown it can be a strong partner, especially to a young state without the infrastructure of the Lower 48, and we ask Attorney General Barr and the U.S. Department of Justice to be that strong partner in finding a path to a more equitable system for Alaska’s rural communities.