Which Alaska do we want? 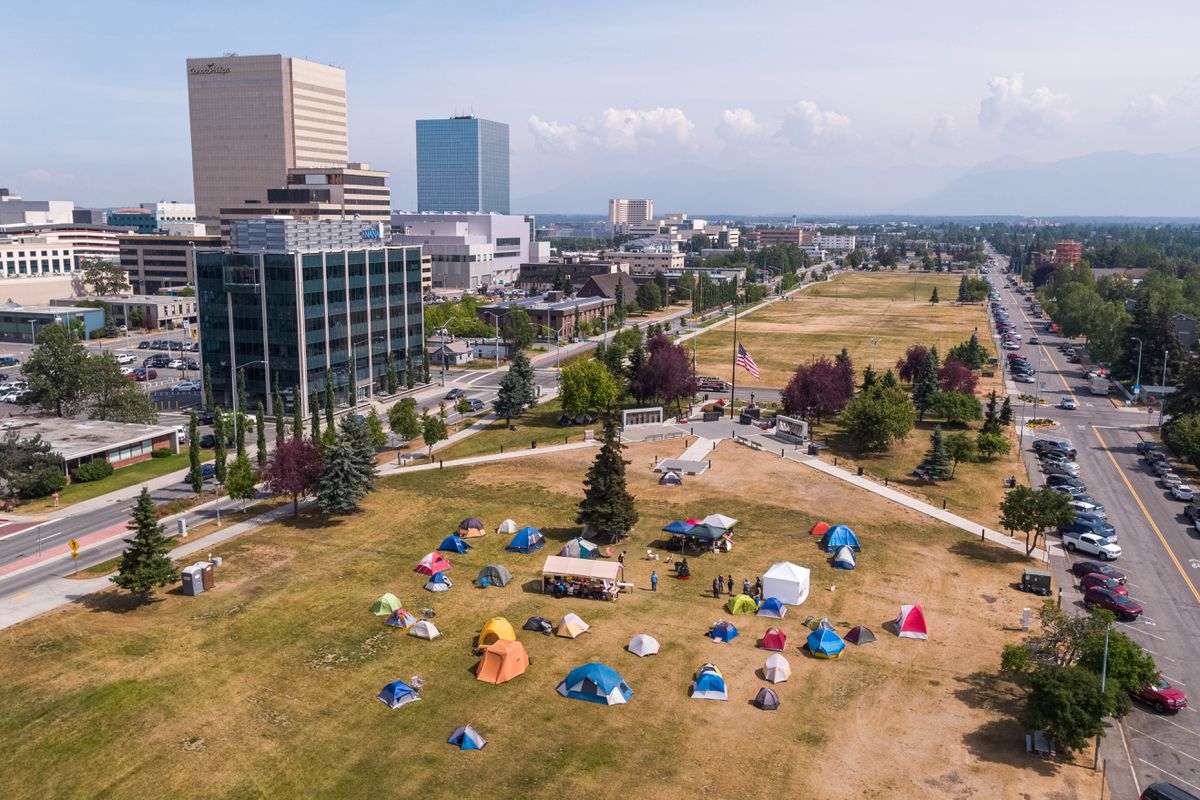 A group of campers protesting Gov. Mike Dunleavy's budget vetoes gather on the Delaney Park Strip Thursday, July 18, 2019. The city has posted notices informing the campers that the camps are illegal and must be removed by Friday. (Loren Holmes / ADN)

A group of campers protesting Gov. Mike Dunleavy's budget vetoes gather on the Delaney Park Strip Thursday, July 18, 2019. The city has posted notices informing the campers that the camps are illegal and must be removed by Friday. (Loren Holmes / ADN)

As the end of July nears, our state stands at a crossroads. An unprecedented amount of the state’s business remains unfinished in Juneau. Gov. Mike Dunleavy and factions of the Legislature are deeply divided over the Permanent Fund dividend. Hanging in the balance are $444 million in cuts to the state operating budget made by the governor’s 182 line-item vetoes, the entire state capital budget and hundreds of millions of dollars in federal matching transportation funds, as well as the PFD allocation itself. Also, close to $2 billion swept from dedicated accounts into the Constitutional Budget Reserve endangers merit scholarships for college-bound Alaskans, Power Cost Equalization funds that defray rural energy expenses, and a host of operating funds that state agencies can ill afford to lose.

Whether our government reaches a compromise on these items — or doesn’t — will propel Alaska toward one of two starkly different futures. Let’s have a look.

Jan. 2020: As legislators prepared to return to Juneau to begin the legislative session, the failures of the summer and fall of 2019 were still fresh in their minds. Alaskans’ hopes that a compromise might have been close in July when Gov. Dunleavy amended the second special session call to meet in Juneau were dashed when it became clear that the “Wasilla 22” and Gov. Dunleavy would not back down from their demand for a $3,000 PFD before any other business was done, and the House and Senate majority caucuses similarly refused to waver from the position that paying such a dividend while other services were axed didn’t make sense. Hundreds of millions of dollars in federal road funding were lost when the Legislature narrowly passed funding for a capital budget, only to see it vetoed by Gov. Dunleavy because funding for the PFD wasn’t yet guaranteed. With the Legislature unable to reach consensus on a PFD amount, not only were fund the governor’s operating budget vetoes not restored, the state had gone without a PFD for the first time in almost 40 years. Recall petitions were circulating, targeting not only Gov. Dunleavy but each of the members of the Legislature not already up for re-election. All would garner enough signatures to appear on the ballot, and even those in the safest seats looked increasingly unlikely to be re-elected.

In the cities, towns and villages of the Last Frontier, the damage from the budget train wreck mounted. The University of Alaska had been able to keep all three of its major campuses open, but they were ghost towns, offering fewer than half the programs they had before. More than $100 million in research money had been lost, and more would follow as the system’s best professors were poached by other institutions. Student enrollment hadn’t yet dropped precipitously, as students had already signed up for classes before the vetoes took effect. In Fall 2020, however, thousands of students would be gone, transferring out of state. Four-fifths would never return. The Alaska Airlines Center sat empty, all athletics funding having been cut. The intramural teams that remained didn’t draw fans. In Sen. Peter Micciche’s district, the Kenai Peninsula College, formerly the second-largest branch campus in the system, was decimated.

Homeless shelters not forced to close entirely because of state funding losses had their capacity cut in half, pushing hundreds more people onto the streets as cold weather approached. Although ordinary Alaskans gave nonprofit aid organizations what little money they could spare, stretching their personal budgets even thinner, it could not make up for the loss of state funding. The municipality’s parks were full of illegal camps in such numbers that city police and other organizations were unable to deal with them. With nowhere stable to warm up, some would freeze to death, particularly in Fairbanks, where the temperature dipped to lows of 40 below for two weeks straight in December.

Having lost their senior benefits, low-income Alaska seniors were forced to make do with less and rely more on the help of friends and family, increasing the economic strain on Alaska families. Medicaid recipients who formerly had dental coverage did without, waiting until their root canals required care in the emergency room. The increased use of higher-cost care drove up private insurance premiums for all Alaskans. And despite the tough-on-crime approach championed by Gov. Dunleavy, state cuts to public safety and court funding left the system worse equipped to handle high crime rates. The districts of Rep. Gabrielle LeDoux and Rep. Lance Pruitt were struck by a wave of property crime even worse than under the much-derided Senate Bill 91.

Worst off were rural communities, where energy costs spiked dramatically because of the loss of Power Cost Equalization funds. In regions with particularly low incomes, even a super-sized PFD wouldn’t have covered the cost difference, and residents got none because of the standoff over the dividend amount. The two-tiered system already offering unequal justice in rural communities was made worse by financial stress and budget pressure. Residents in the dozens of villages in Rep. Dave Talerico’s district were furious.

Within organized boroughs and cities, property tax bills jumped because of the loss of revenue sharing and state school bond debt reimbursement. Suicide rates, already among the highest in the nation, crept higher, and Alaska’s fragile economic recovery was shattered. It was the worst low Alaska had faced since the late 1980s, and it was entirely self-inflicted. If an end was coming, it wasn’t coming soon.

There is another path for Alaska’s future, however, one that starts with the recognition that the first scenario cannot be allowed to take place. No one’s agenda is worth the damage that will be caused by a refusal to make a compromise in the state’s best interest. It starts with legislators sitting down with one another, putting real or perceived slights behind them, and finding a way to count to 45. It will take 45 legislators’ votes to reverse the sweep that emptied the funds for Power Cost Equalization and college scholarships for bright young Alaskans. It will take 45 votes to restore funding vetoed by Gov. Dunleavy. And, as the PFD will almost certainly be an aspect of whatever deal is made, it may well need 45 votes too.

Legislators, be the leaders Alaskans elected you to be. Do not allow our great state to fall backward into self-inflicted economic and social disaster. Find a way to a budget plan that will not leave our streets less safe, our vulnerable in harm’s way and our best and brightest young people on a one-way trip out of the state. Every day without action compounds the uncertainty and hardship already facing Alaskans. Find a way to count to 45.