Recall is attractive to Dunleavy’s opponents. But it’s not their best option. 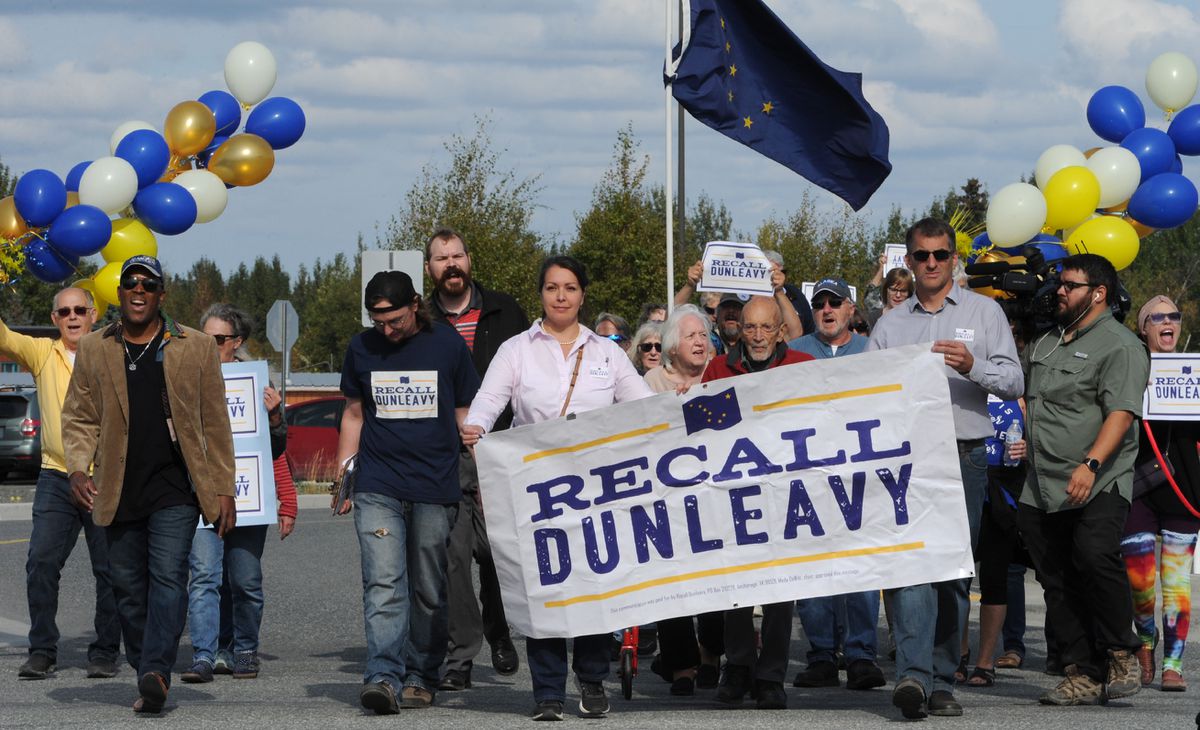 The Recall Dunleavy campaign march towards the State Division of Elections in Anchorage on Thursday, Sept. 5, 2019, where they submitted 49,006 signatures for review and certification. (Bill Roth / ADN)

The Recall Dunleavy campaign march towards the State Division of Elections in Anchorage on Thursday, Sept. 5, 2019, where they submitted 49,006 signatures for review and certification. (Bill Roth / ADN)

For Gov. Mike Dunleavy’s political foes, there’s an intuitive appeal to recalling him from the state’s top executive seat. When you find yourself having taken a wrong turn while out hiking, for instance, you reverse course to the point where you departed from your intended path. When a business partnership goes sour, you explore new opportunities. But if those engaged in the effort are trying to thwart the governor’s policies rather than simply oppose him personally, trying to recall him isn’t likely to be the most productive path.

The reasons why recall is likely to be a hard, potentially fruitless effort revolve around Alaska’s high standard that such attempts must satisfy. According to Alaska law, “the grounds for recall are (1) lack of fitness, (2) incompetence, (3) neglect of duties, or (4) corruption.” And although the governor’s detractors would hold that he easily satisfies one or more of those criteria, in practice the legal definitions for what constitute each are narrow enough that the courts may not agree if it comes to a legal challenge, which it almost certainly will. Even before the recall reaches that point, the state is likely to take as much time as is allotted under law to decide on its legality. The same will be true in the court case that follows if, as expected, the recall petition is denied certification on the grounds that the Department of Law doesn’t find it satisfies the legal standard. That court case would have to be argued in Superior Court, then in all likelihood appealed to the Alaska Supreme Court. Even if that consideration were expedited, it’s easy to see how having the matter settled in time for signature-gathering, final certification and a special election next year would be difficult. It’s entirely possible that, even if the recall proponents were able to jump through all those hoops, the vote on recall would take place after three of the four years’ worth of legislative sessions in Gov. Dunleavy’s term.

As seasoned participants in Alaska politics for several decades, the co-chairs of the recall petition know all of this and are pushing forward anyway. They likely have multiple reasons: providing visible evidence of Alaskans pushing back against Gov. Dunleavy’s agenda, standing up for institutions and values they believe are crucial to their vision of our state, and laying a marker down for conduct they find impermissible by the governor.

But in practical terms, those working toward an Alaska different from the governor’s plan for the state have better, more effective and likely quicker options: the legislative races in 2020.

As it stands now, the Legislature is a recipe for permanent gridlock. Those looking for the 45 votes it takes to override budget vetoes by Gov. Dunleavy have almost no hope of doing so except on issues of the broadest possible consensus. Blocs of legislators from Southcentral Alaska were willing to withhold funds for a broad array of vetoed state services until they got their way on the Permanent Fund dividend funding formula, causing a deadlock that was only partially resolved when the governor backed off on some of his most divisive cuts. Unless there is a sweeping change in legislators’ mindsets, next year promises to be even more vitriolic and less productive, as rhetoric over the PFD will only escalate between now and then.

But although some legislative seats are sure to be won next year by the candidate promising the largest dividend, others will surely be in play. In particular, Anchorage members of the current House Minority caucus, as well as former majority member Rep. Gabrielle Ledoux, are all in districts close enough that a sustained effort — like that underway by the recall proponents — could make a difference. The entire House of Representatives and half the Senate will be up for election.

If those opposed to Gov. Dunleavy’s agenda can manage to seat 45 members willing to override budget vetoes (or 40, for non-budget items), the tenor in Juneau and the policies emerging from it will be very different. By contrast, if the recall can clear every hurdle and then gain the support of a majority of voting Alaskans, its proponents will succeed in replacing Gov. Dunleavy with Gov. Kevin Meyer.

Advocates for recall will hold that those in their camp can whistle and chew gum at the same time; that is, they can pursue legislative races and the effort to unseat the governor without damaging either goal. But it’s a fact that dollars spent on one can’t aid the other. Volunteer hours spent pursuing recall signatures can’t simultaneously be spent knocking doors or making phone calls for House candidates.

At some point, choices have to be made. The governor’s opponents should think about which is more important.