What has the earthquake taught us? 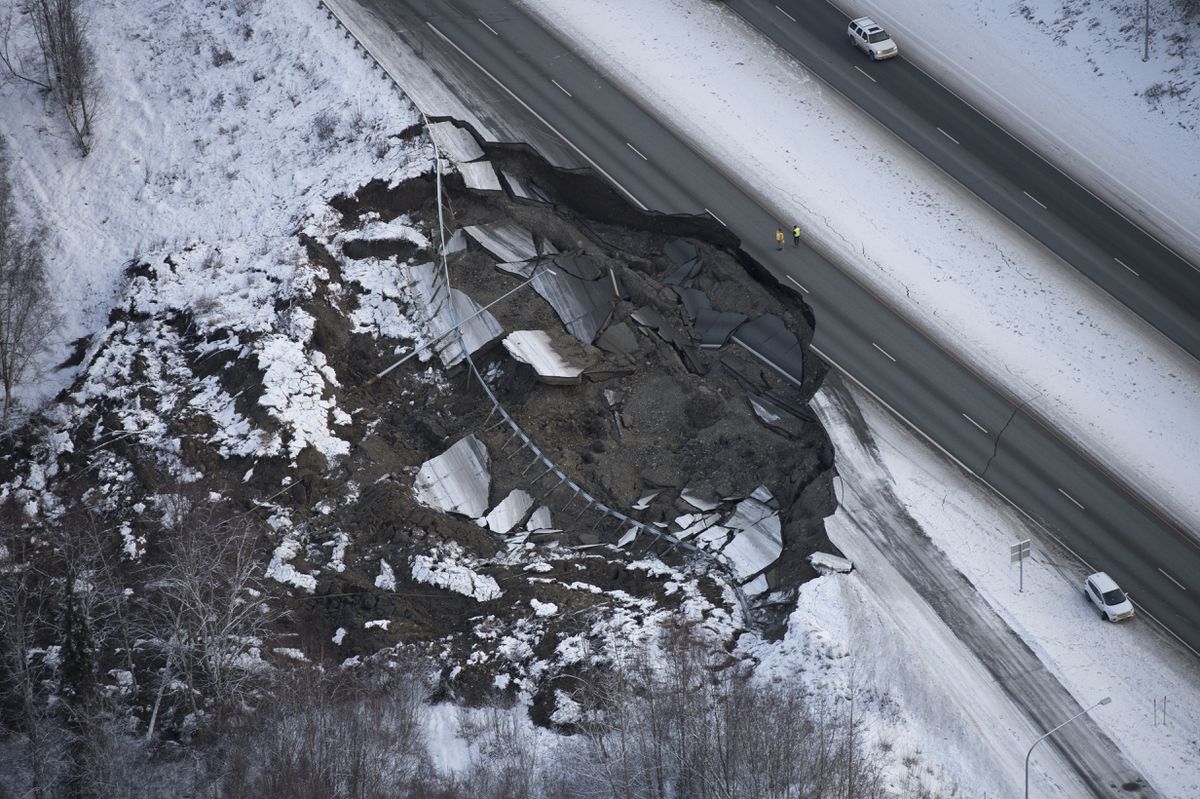 The Glenn Highway near Mirror Lake was heavily damaged in the 7.1 earthquake in Southcentral Alaska on November 30, 2018. (Marc Lester / ADN archive)

The Glenn Highway near Mirror Lake was heavily damaged in the 7.1 earthquake in Southcentral Alaska on November 30, 2018. (Marc Lester / ADN archive)

On Nov. 30, 2018, Southcentral Alaska was shaken by a magnitude 7.1 earthquake, the strongest to hit Anchorage since the devastating Good Friday Earthquake of 1964. It was a wake-up call for Alaskans. A year later, life here seems mostly back to normal, but the aftershocks — both literal and figurative — have continued. As we move on with our day-to-day affairs, it’s worth reflecting on a few of the lessons the quake left us with.

Although the 1964 earthquake sparked an overhaul of city building codes and inspired a focus on resilience to future shakers, by 2018, those lessons had receded in the public memory. The 2018 earthquake brought them back to the foreground, as houses, commercial buildings and places of worship suffered damage. The quake also exposed the fragile condition of our transportation infrastructure. Although the impacts on roads, railroads, bridges and the Port of Alaska were nowhere near as extensive as in 1964, even a magnitude 7.1 earthquake was enough to substantially disrupt transport arteries that are vital to the vast majority of Alaskans.

Authorities universally agreed that we dodged a bullet last year, both in that the earthquake wasn’t stronger and that the parts of Alaska’s infrastructure that are most vulnerable didn’t see crippling damage. But we can’t count on being lucky. We should commit ourselves to the much-needed repair of the port and regular maintenance of Alaska’s roads, railroads and especially bridges and overpasses. Although Alaska’s budget woes have squeezed maintenance budgets, keeping our transportation arteries in good shape should be a top-level priority.

Another way Alaska got lucky in last year’s earthquake was the lack of deaths and few injuries from a widely felt natural disaster. Power, gas and water outages were isolated and dealt with in short order. Still, however, some went without those services for several days and had to rely on the kindness of friends and neighbors to get by. If the damage had been worse, many of us would have been caught flat-footed. To be as prepared as possible for an earthquake, fire, extreme weather or other disaster, it’s a good idea to have a home readiness kit on hand, with essential items such as flashlights, blankets, water, first aid supplies and other items. Make sure everyone in your home knows where the kit is, and have a plan for getting back in contact with one another if disaster strikes — keeping in mind that internet and cell service are both likely to be disrupted in such an event.

It wasn’t just luck that limited the damage to Anchorage buildings. It was also the legacy of stronger building codes enacted after the 1964 earthquake. There’s a common saying among Alaska pilots that aviation regulations are “written in blood;” the same is true of building codes. Every rule about joist placement, bracing, tensile strength and other dry-sounding terminology is in place because its absence meant a beam broke, a facade collapsed, or a deck fell — sometimes at the cost of a person’s life.

Last year’s earthquake was strong enough that places where building codes were less stringent or where enforcement was less rigorous suffered notably greater damage. Both in Anchorage and the Matanuska-Susitna Borough, municipalities should look at where code should be updated to better mitigate the kind of damage we saw last year.

To the credit of the state and federal government, officials were quick to issue disaster declarations that released aid to affected Alaskans. Authorities estimate the total government assistance related to the quake will top $275 million, with $130 million already claimed. But the process of applying for, qualifying and receiving aid has been long, and for many it has been frustrating. Some didn’t qualify because they rent, not own, their homes. Some were scammed by unscrupulous operators offering quick fixes. Some received far less money than will be needed to fix their homes or start anew.

Earthquake insurance is an option, but deductibles and premiums are both relatively high, and even in Anchorage, it’s hard to justify the expense. From a cost-benefit perspective, homeowners’ best option is likely to be building their homes to code, having them inspected for vulnerability to earthquakes and other disasters, and retrofitting or renovating them where possible to increase resilience.

When the chips are down, we’re in this together

The most important lesson last year’s earthquake taught us is perhaps the oldest piece of Alaska wisdom: In crisis, our most important resource is each other. Living more than a thousand miles from the Lower 48, we can’t escape the fact that those most able to help are right next door. And we have a long, proud history of being there for each other when the need arises. What shone through in the aftermath of last year’s quake were the many kindnesses Alaskans paid each other: Helping move a neighbor’s toppled bookcase that blocked a bedroom door. Letting friends come over to take hot showers while their power was out. Bringing food to shaken elders. Finding runaway dogs that bolted during the earthquake.

These acts, both small and large helped us get back to normal when the shaking stopped, and they’re an essential part of what it means to be an Alaskan.

There may not be another big earthquake in the near future. But another disaster will come — a fire, a windstorm, a freezing rain event. And when it comes, we’ll be better off if we’ve taken the 2018 earthquake’s lessons to heart.

The views expressed here are those of the Anchorage Daily News, as expressed by its editorial board, which welcomes a broad range of viewpoints. Current editorial board members are Ryan Binkley, Andy Pennington, Tom Hewitt and Andrew Jensen. To submit a piece for consideration, email commentary@adn.com. Send submissions shorter than 200 words to letters@adn.com or click here to submit via any web browser.