The good, the bad and the ugly of the Alaska cold snap 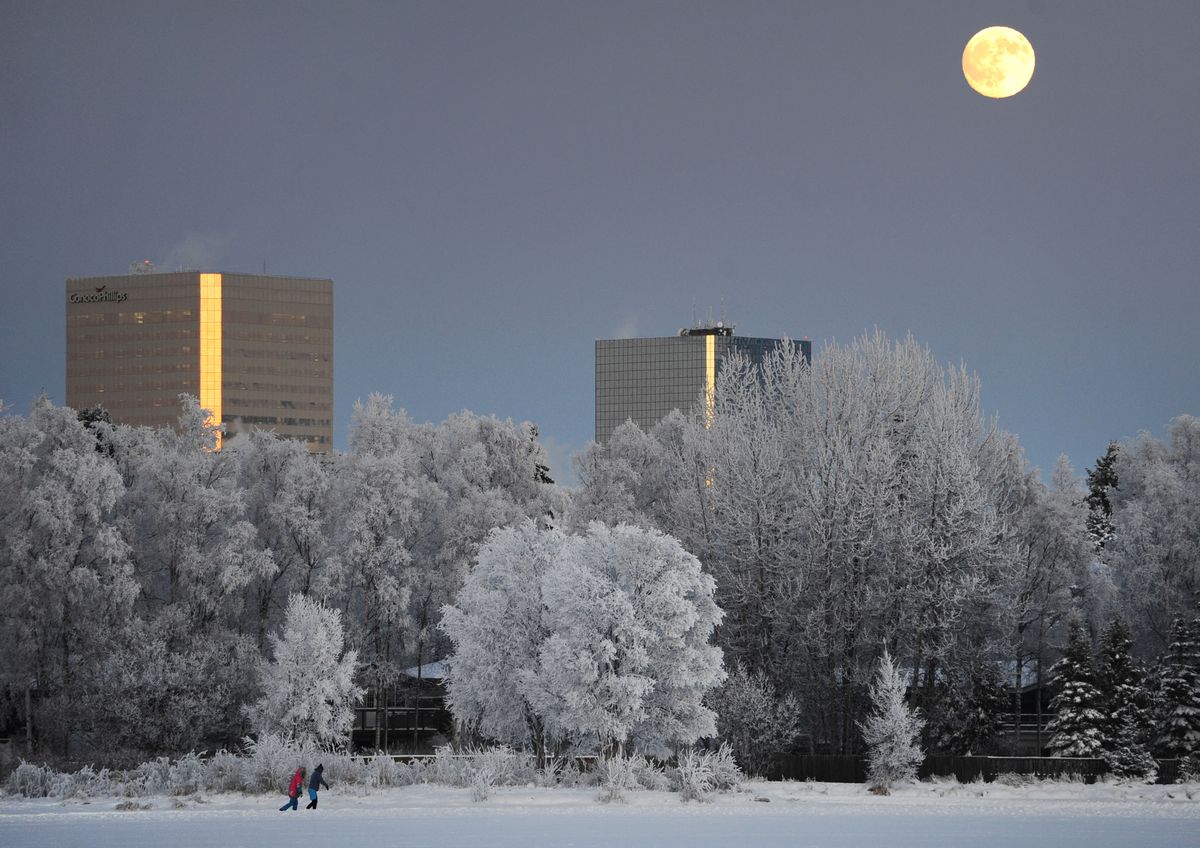 The moon rises above the Anchorage skyline as people ice skate on Westchester Lagoon on Thursday, Jan. 9, 2020. (Bill Roth / ADN)

The moon rises above the Anchorage skyline as people ice skate on Westchester Lagoon on Thursday, Jan. 9, 2020. (Bill Roth / ADN)

Right on the heels of Alaska’s warmest year in recorded history, the state is letting us know that this is still the subarctic after all. A week-long cold snap sent thermometers plunging into the negative across much of the Last Frontier, bringing temperatures significantly lower than in the past few mild winters. It brought to mind the “real cold” more common to a generation ago, for better and for worse. Here’s a rundown of reminders the cold brought us.

The Ugly: The plight of Anchorage’s most vulnerable

The most urgent and serious issue the cold snap exposed was another danger of daily life that is faced by Anchorage’s homeless population. With the number of people without a place to stay in Anchorage stuck at around 1,100, the capacity of traditional shelters such as Brother Francis has been outstripped by demand in the subzero temperatures. And the consequences can be deadly: Anchorage Police Department personnel confirm that there have already been unattended deaths outdoors in the city this winter, though they weren’t able to immediately provide an exact number. The municipality, local nonprofit groups and health-related community organizations and businesses have made commitments to reduce — or even functionally eliminate — homelessness in Anchorage, but visible progress in reducing the number of people sleeping outdoors has not yet been made.

The cold underscores the importance that their effort succeed, as well as the sad results if it should fail or be abandoned. Along with public safety via law enforcement and the justice system, it’s hard to identify a more pressing issue in Alaska’s biggest city — the toll can be expressed in human lives.

Most of us have the good fortune to have a roof over our heads, but that doesn’t mean we’re immune from the effects of the cold. When temperatures enter negative territory, pipes can freeze, plumbing can back up and boilers sometimes fail. Keep an eye on your pipes to make sure everything is in order. If you have plumbing along an outside wall, consider letting your faucet drip and leave your under-sink cabinets open at night to prevent a freeze-up. Drawing your shades at night also helps your heating system keep up. And if you’re leaving town when temperatures are low, make sure someone is checking on your place.

Also, the colder temperatures often keep us cooped up more than usual, which can lead to boredom, frustration — and illness. Colds and the flu virus have been spreading widely in the past few weeks. Remember to keep up on your vitamin intake; that includes vitamin D, which you can help your body synthesize by getting outside in the daylight. Even if it’s cold out, getting sun on your face can be a mental boost.

The Good: A real Alaska winter

Of course, there are plenty of ways in which the cold is a good thing. Lower temperatures means ice will freeze thicker on lakes and rivers, meaning less likelihood of tragic incidents involving Alaskans driving on bodies of water in the winter and spring. It means safer conditions for ice skating and fishing. And it also means the bounty of new snow Southcentral Alaska received on New Year’s Eve and New Year’s Day will stick, instead of melting and refreezing as ice. That’s great news for skiers, fat-bikers — and mushers. The longer the good snowy conditions hold, the surer it will be that there will be no problem with the Iditarod following its normal Willow-to-Nome route — a prospect that has become far less certain in recent years.

And then there are the intangibles: the hoarfrost and rime ice that coats trees, buildings and lakes. The crisp brightness of the air and the quality of the low-angle sunlight. The recognition that, given the weather, we need to help each other make it through, whether that means visiting friends or stopping to help someone give their dead car a jump. That feeling of collective will to endure — and enjoy — the cold isn’t just Alaskans’ stubbornness; it’s at the heart of why many of us love our state.

Depending on your level of pessimism, you could cast the “real winter” aspect of the cold as a negative — after all, why should it be remarkable that Anchorage sees a protracted streak of below-zero temperatures? Didn’t that used to just be “winter,” something we all took for granted?

Maybe so. But it’s 2020, and we’ll take whatever normalcy we can get. If you’re able to, we suggest you get out and enjoy it too.