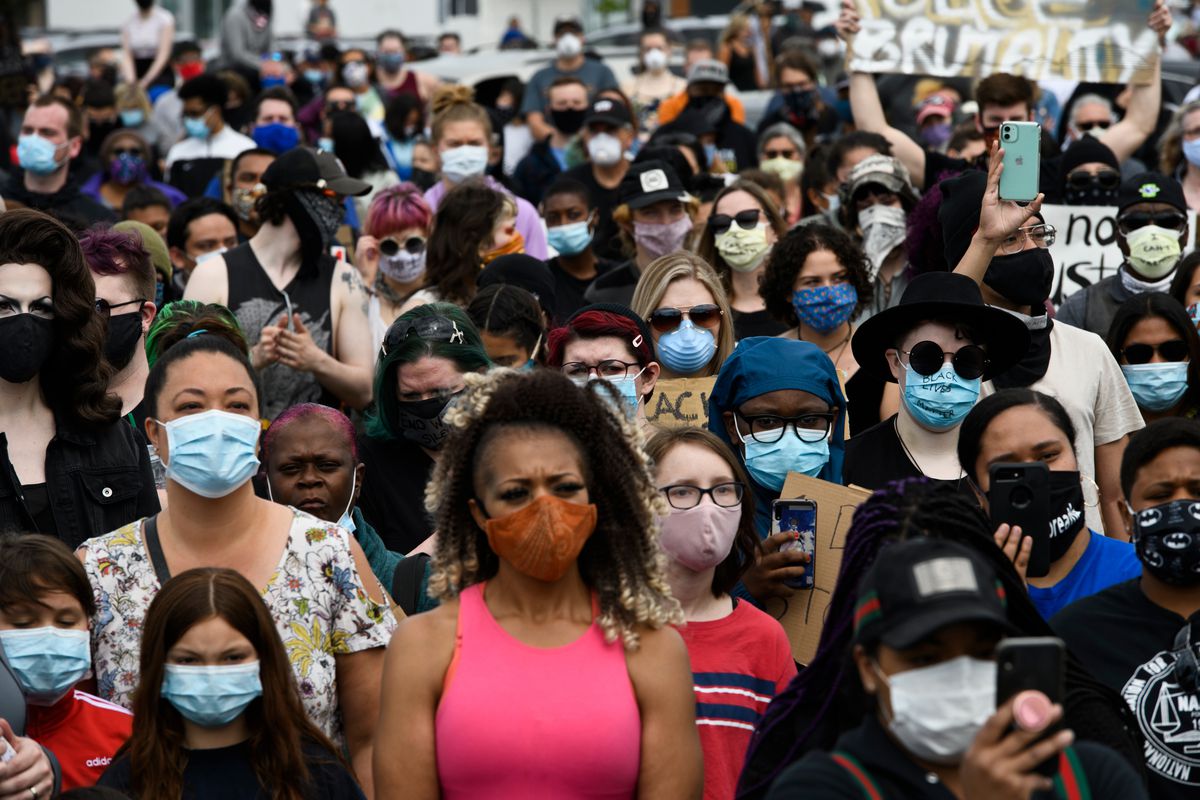 A crowd gathered in the parking lot of the Midtown Mall and along the sides of Northern Lights Boulevard Saturday, May 30, 2020, for the “I Can’t Breathe” protest against police brutality. (Marc Lester / Anchorage Daily News)

A crowd gathered in the parking lot of the Midtown Mall and along the sides of Northern Lights Boulevard Saturday, May 30, 2020, for the “I Can’t Breathe” protest against police brutality. (Marc Lester / Anchorage Daily News)

The death of George Floyd under the knee of Minneapolis police officer Derek Chauvin has galvanized a worldwide discussion of the role of police in society — but more than that, it has brought the inequitable treatment of some members of our society to the forefront of our national discussion. Some of those imbalances, which pervade everyday life, are merely annoying. Others are overtly harmful. And a few are deadly.

In the interest of full disclosure, we should note that we, the three members of the Anchorage Daily News editorial board, are all white men, and have not lived the same experiences as those who are on the receiving end of these inequities on a daily basis. Given that fact, what authority do we have to speak on issues of race?

In short, no more than any other people, and admittedly less than some. But that doesn’t excuse us from confronting racism and race-based inequity in our society — quite the opposite. Discussions of race and related issues have too long been avoided by people like us, for a variety of reasons that don’t hold water.

At its founding, American society was based on the radical principles that all people are created equal, that they possess inalienable rights, and that all were free to pursue their own happiness. But it included a colossal and ugly contradiction: Slavery was America’s original sin. Take the infamous three-fifths compromise written into the Constitution itself, making a mockery of the noble words of the Declaration of Independence. And although we’ve come a long way toward equity since the Constitution’s drafting, incidents like the deaths of George Floyd and Breonna Taylor show we still have so far to go.

One common defense made by those comfortable with the status quo is that those alive today didn’t perpetrate the horrors of slavery, or of Jim Crow, so why should they be held to account for them? The answer is simple: Those alive today may not have constructed this system, but have witnessed over and over that it disadvantaged others for no reason other than the color of their skin. The vast majority of us alive today may not have perpetrated racial injustice personally or intentionally, but we are aware of that systemic injustice — and how can you consider yourself a good person if you don’t combat injustice just because it doesn’t harm you in a way you can see?

Alaska’s history of racism is different but no less fraught than that of the rest of the United States. Alaska Native people are alive today who were removed from their homes to attend boarding schools, punished for speaking their language or celebrating their culture, and sometimes made victims of physical or even sexual abuse. Signs reading “No Dogs, No Natives” hung in store windows. During World War II, more than 800 Aleuts were forcibly relocated to internment camps, their villages burned as they left, ostensibly for their protection. Redlining was a common practice in Anchorage and other Alaska communities. This is not ancient history.

Even today, racial prejudice scars the face of the Last Frontier. The case of the Fairbanks Four exposed deep rifts and race-based suspicion following the beating death of an Interior teenager, and the four young Native men convicted of the murder spent 18 years in prison before being released in 2015 after the emergence of confessions of other men who said they were part of a group actually responsible for the killing. The ADN’s Lawless and Unheard projects have chronicled Alaska’s shortfalls in combating domestic violence and sexual assault, problems that disproportionately affect rural and Native communities.

So what can we do? We can listen — give space for those who have been mistreated to share their experiences. We can look — when we see something wrong, from others hurling racial slurs to incidents of police misconduct, we can document those misdeeds and bring them to light — as signs at protests nationwide have said, how many incidents like the one in which George Floyd was killed took place when no one was recording? We can speak — to our friends, to our families and to our children. We may not have created this system, but we live in it and we have the power to change it. And we have the responsibility to take action so that our children don’t grow up to wonder how we lived with injustice and chose not to correct it.

What that action looks like depends on each of us and who we are.

If you’re a manager of a business, take a step back and look at the people who work for you. Do they reflect the diversity of our community? If they don’t, ask yourself: Why not?

If you’re a lawmaker, consider what could be done on a policy level to make our union, our state and our community fairer in the way all of their people are treated. If you’re not a lawmaker, tell your lawmakers that you expect them to enact those policies — and make sure they follow through. Some have said that racism can’t be solved through policy alone, and while that’s true, it’s also a cop-out. Most of our country’s strongest steps forward on issues of racial justice have been because of landmark laws — the 13th Amendment, the Civil Rights Act, the Fair Housing Act and the Alaska Anti-Discrimination Act are just a few examples.

No matter who you are, be willing to have conversations that make you uncomfortable about our society, your place in it and the subtle — and sometimes overt — factors that tip the scales of justice toward some and away from others. If we’re going to balance those scales, it will take action from all of us, however we’re able. As historian Howard Zinn said, “We don’t have to engage in grand, heroic actions to participate in the process of change. Small acts, when multiplied by millions of people, can transform the world.”