Independence Day reminds us debates about America have always been patriotic 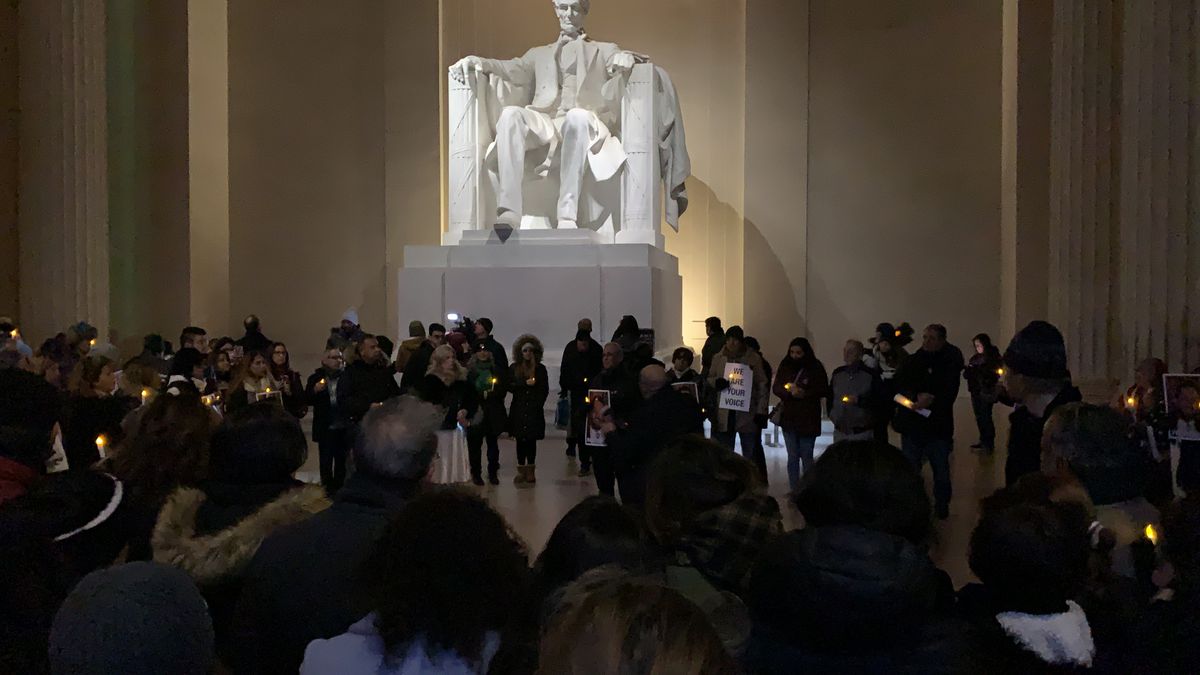 Supporters of the family of Bijan Ghaisar listen to his father, James Ghaisar, speak inside the Lincoln Memorial on Sunday, Nov. 17, 2019, the two-year anniversary of the fatal shooting of his son. (Washington Post photo by Tom Jackman)

Supporters of the family of Bijan Ghaisar listen to his father, James Ghaisar, speak inside the Lincoln Memorial on Sunday, Nov. 17, 2019, the two-year anniversary of the fatal shooting of his son. (Washington Post photo by Tom Jackman)

Independence Day weekend in 2020 greets us in the midst of a worsening pandemic, deep economic turmoil and deep political divides over fundamental issues. Some have responded to this state of affairs by making dire pronouncements about the state of our country. But the truth of America is that it was founded in the tradition of loud, messy, difficult, essential discourse — a tradition that continues to this day. That’s something we should celebrate, not decry.

The very document we celebrate on July 4, our Declaration of Independence from the British empire, was itself the product of a divided citizenry. A substantial fraction of Americans were Loyalists in 1776, faithful to the British crown despite the revolutionary fervor of the patriots. By historian Robert Calhoon’s estimation, “The patriots received active support from perhaps 40% to 45% of the white populace, and at most no more than a bare majority.”

It was not despite but because of looming differences among Americans that the Declaration and, later, the Constitution, were as well-crafted as we find them today. The drafters of the Declaration knew that it was key to making the argument for independence in a way that appealed to the many Americans who were either undecided or opposed to the revolutionary cause. What emerged was a beautiful, succinct statement of principles that the U.S. still strives to live up to today: “We hold these truths to be self-evident, that all men are created equal, that they are endowed by their Creator with certain unalienable Rights, that among these are Life, Liberty and the pursuit of Happiness.”

Eighty-seven years later, the union based on those principles was in the midst of its hardest test, as the northern states fought against the South in the Civil War. The Battle of Gettysburg raged from July 1-3, 1863, and when the smoke cleared on July 4, Union troops had repelled the Confederate army’s attempt to capture northern territory, setting in motion the events that would result in victory for the United States. That victory came at great cost, with more than 7,000 soldiers dead and 33,000 wounded.

That fall, President Abraham Lincoln gave his famous address at the consecration of a cemetery there, reflecting on the war and why it was being fought — the notion that all men are created equal, given greater credence by the issuance of the Emancipation Proclamation less than a year prior. Crucially, Lincoln also noted that the work of creating a more perfect union is never done: “It is for us the living, rather, to be dedicated here to the unfinished work which they who fought here have thus far so nobly advanced.”

The genius of those founding documents written centuries ago is that they outline foundational principles that can be applied to the situation of any era. They are as relevant today as they were when they were conceived. More than 150 years later, it’s as clear as ever that much work remains to make our country better at living up to its ideals. That work can be slow; it’s frequently disorganized, imperfect and acrimonious.

We see it on the streets as protesters decry institutional racism that has led to the deaths of people of color. We see it in the debates over what emergency measures are prudent or necessary to deal with the COVID-19 pandemic.

And here at home, we see it in the columns and letters shared on these opinion pages, by hundreds of people on scores of issues. As Alaskans debate our own big questions, such as the proper role and size of state government, the future of the Permanent Fund dividend and our relationship with the oil industry, we’d be well served to remember those foundational principles of freedom and liberty. The grand experiment of democracy continues. It’s a never-ending, evolving conversation that can be difficult and even ugly at times, but it carries on, making painstaking progress toward that more perfect union.

It is too easy these days, as our country and our state face challenges that seem insurmountable, to declare that America or Alaska is broken. Rather, the opposite is true. It’s only in a free society, one that values individual liberty, that these questions can be debated openly.

Perhaps the best sign that progress is being made, however slowly, is the democratization of that debate: Those participating in rallies for justice today are the descendants of people who were owned as property by some of the signers of the Declaration of Independence. Because of the hard, painful and even bloody work done over the nearly 250 years since our nation’s founding, we’re all closer to a society where people are treated as equals. As we reflect on Independence Day and what it means this year, that’s worth celebrating — as we redouble our efforts to continue that work.