How Alaska could win – or lose – the fight against COVID-19 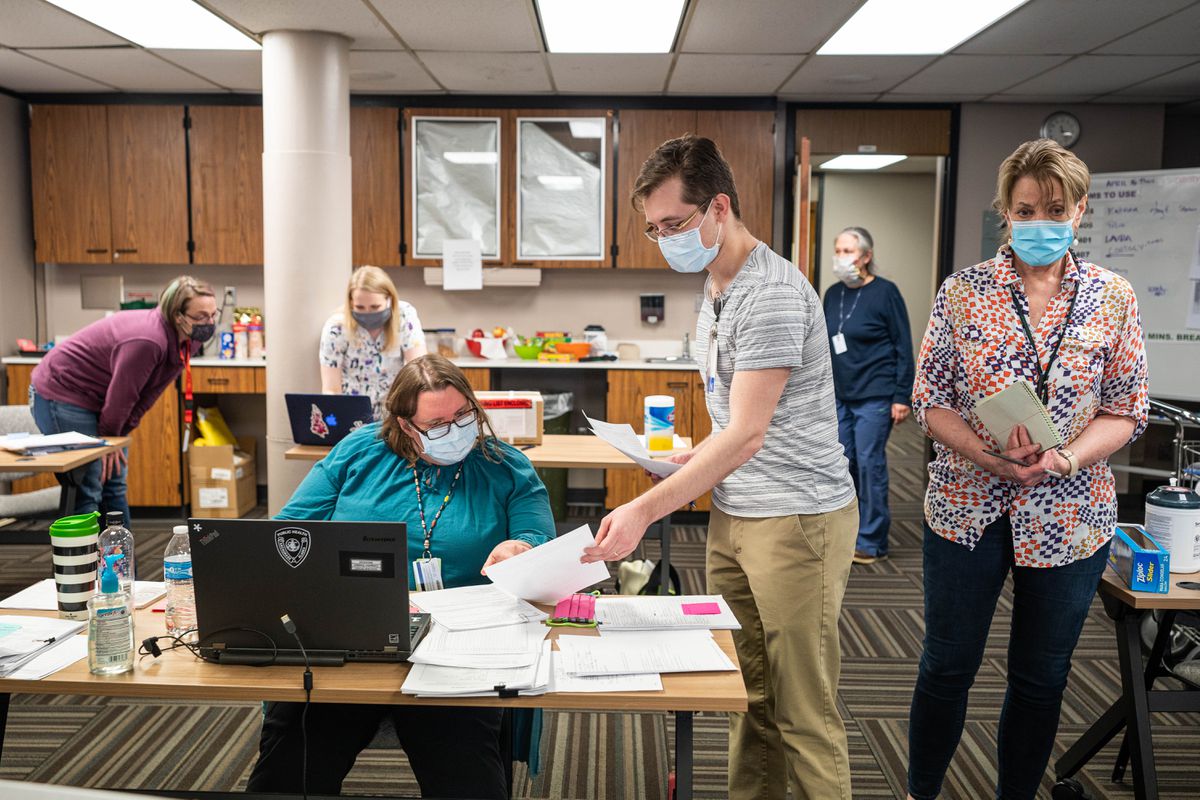 Nurses from the Anchorage Health Department and Anchorage School District work on the COVID-19 contact investigations and monitoring team on Thursday, April 16, 2020 in a conference room at the health department in downtown Anchorage. (Loren Holmes / ADN)

Nurses from the Anchorage Health Department and Anchorage School District work on the COVID-19 contact investigations and monitoring team on Thursday, April 16, 2020 in a conference room at the health department in downtown Anchorage. (Loren Holmes / ADN)

The battle against the novel coronavirus is far from over. But it’s clear, in witnessing what’s happening elsewhere in the world, what success and failure look like, and the consequences of each. Success looks like New Zealand — widespread compliance with a hard lockdown order, followed by phased reopening and a different, but recognizable world — one in which the economy isn’t severely devastated, and where it’s not a foolish risk to resume in-person classes for school-age children. Failure looks like Arizona, where a rush to reopen led to a spike in cases that has quickly overrun the state’s ability to track new cases’ contacts, and intensive care units are approaching maximum capacity.

Will Alaska’s path look more like New Zealand or Arizona? So far, we’ve been lucky to follow a more New Zealand-like trajectory, but in recent weeks, that status has been endangered, with both new case counts and positive test percentages creeping upward. We now stand at an inflection point, and our actions in the weeks to come will determine whether we get back on a track that resembles New Zealand’s. The consequences of our success or failure, both in public health and economic terms, will be immense.

What’s the difference between places whose COVID-19 case curves look like New Zealand’s and those that look like Arizona’s? There are several, but near the top of the list are abundant testing and contact tracing.

In the absence of a full-scale lockdown, which is near-impossible to maintain for long periods, what states and countries must try to do is limit transmission from those who are sick to those who are healthy. Testing and tracing are the two linchpins of that strategy.

Abundant testing ensures that there aren’t undiagnosed COVID-19 carriers spreading the disease before authorities have a chance to notify those who test positive. And tracing goes the next step of the way, as public health teams contact everyone the carrier could have infected and let them know about their exposure, so that they can get tested, monitor for symptoms and self-quarantine. Doing so stops the chain of infections and prevents COVID-19 from achieving greater community spread.

When the testing and tracing system works, the curve of new cases looks like Alaska’s did before Memorial Day: a handful of new cases daily, but no runaway growth. More recently, we’ve seen what happens when testing and tracing can’t keep up with the rate of new infections: public health officials aren’t able to notify everyone of their exposure individually and are forced to make public notice of businesses where patrons could have been exposed to the disease.

Such disclosures are tough to stomach from an economic standpoint, as they can be devastating to public confidence that businesses can remain open safely. But with regard to public health and safety, there’s no question: People need to know if they’re at risk of having contracted the virus. And the only way to avoid those public notices is through tracing, with a small army of public health officials letting every patron know they might had been exposed.

Right now, that army is too small. The Municipality of Anchorage has been magnifying its tracing capacity by supplementing Health Department staff with school nurses and other health care workers who have received tracing training. But at current staffing levels, they can’t keep up with the dozens of new cases per day that have recently become normal for our state — particularly when those new cases have been partaking in extremely risky behavior, such as disregarding masking and distancing mandates, as well as spending long periods indoors among large groups outside their households. The reality is that many Alaskans will not willingly accept a return to “hunker down” orders. Thus it’s imperative the Municipality declare contact tracing its No. 1 priority and pour every ounce of effort, monetarily and otherwise, into expanding that effort.

If you have free time this summer or fall, or know someone who does, please consider becoming a contact tracer.

Fortunately, Alaska’s institutions are rushing to fill the tracing gap. The University of Alaska Anchorage announced recently that its College of Health is offering contact tracing certification training through a partnership with the state, offering health care workers and members of the public an opportunity to help out on the front lines in the fight against COVID-19. The program should help bolster the ranks of the tracing teams and provide expanded capacity at a time when it’s sorely needed.

However, none of that happens instantaneously, and not everyone can drop what they’re doing to become a contact tracer. So what can we all do to help out — or, at the very least, keep tracers’ jobs from being more difficult?

Businesses can keep logs where customers sign in and provide contact information, said Carolyn Hall, the Municipality of Anchorage’s communications director. Although the logs are voluntary, they’re a godsend when teams are trying to determine who might have been exposed at a location during a particular time.

Individually, we can also log our own contacts and the places we visit. To reconstruct patients’ contacts, teams ask them to consult their phone records or credit card history, which is valuable information but may not capture the whole story of our interactions. If you pay attention to the people you spend time with and the places you visit, that information will be extremely helpful if teams later need to know who to contact.

Most of all, however, the behavior that will make tracing teams’ jobs the easiest is what we’ve been told to do all along: Maintain social distancing — at least six feet — when among people outside your household. Wear a face covering in public places, especially indoors. Keep group sizes small in social situations, and use proper hygiene practices. There’s nothing particularly complicated about beating COVID-19 — we just can’t let our selfish desire for things to be “normal” again overwhelm good judgment and the advice of public health professionals.