One small step for police accountability 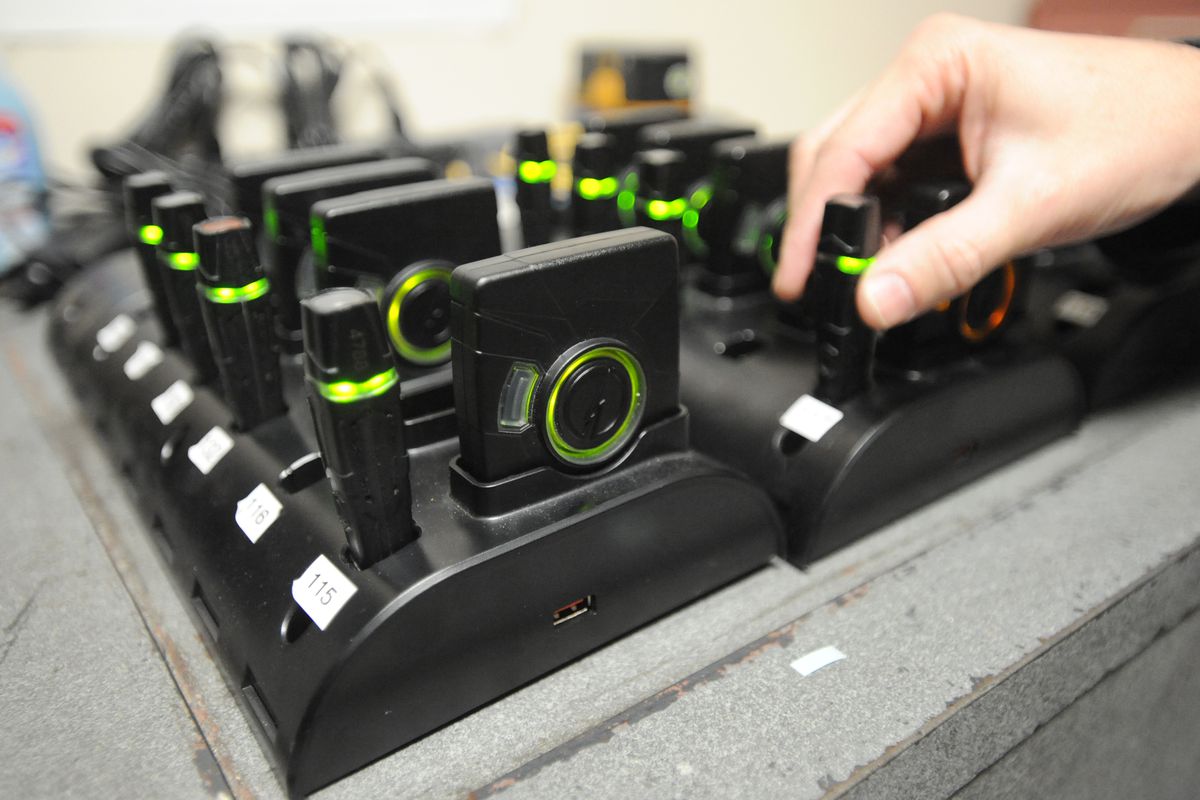 University Police Department officers on the UAA Campus have been wearing on-body video cameras that records wide-angle video since January 2013. Cameras and recorders are placed in a dock after an officers shift where the batteries are charge and the data is automatically uploaded to a cloud storage. Thursday, Oct. 1, 2015.

University Police Department officers on the UAA Campus have been wearing on-body video cameras that records wide-angle video since January 2013. Cameras and recorders are placed in a dock after an officers shift where the batteries are charge and the data is automatically uploaded to a cloud storage. Thursday, Oct. 1, 2015.

Protests following the death of George Floyd have swept across America for months, provoking a nationwide reckoning on racism and use of force by the police. Anchorage has been fortunate that protests here have been nonviolent and solutions-oriented. But Alaska isn’t immune to the debate of questions over the use of force by police. As reported recently in an ADN investigation, 43 people have died at the hands of law enforcement officers in Alaska during the past five and a half years. Understandably, Alaskans — particularly the friends and loved ones of those who have died in such incidents — have questions about the justification for those deaths. There’s a simple, widely employed tool that could help shed more light on the issue, but the Anchorage Police Department has yet to adopt it: body cameras.

In some respects, APD is ahead of other departments when it comes to avoiding the kind of incident that led to George Floyd’s death in Minneapolis and others that were flashpoints in the debate over police use of force during arrests. The department’s use-of-force policy, for instance, is public and fulfills many of the recommendations of accountability groups, such as bans on chokeholds and strangleholds, requiring de-escalation and a prohibition on firing at (or from) moving vehicles except in extreme cases. But in one regard, APD lags badly — for years, the department has been considering implementing body-worn cameras, but has yet to do so.

According to Police Chief Justin Doll, the department “fully supports” a body camera program, with two major reservations. The first is cost, primarily in the form of data storage. That’s understandable, given that the quantities of data being created would be huge — but data storage is cheaper now than it has been at any point in recorded history, approximately 2-3 cents per gigabyte, and it gets less expensive virtually every day. And, on that note, know what else is expensive? Wrongful death lawsuits. If cameras could help establish a factual record that keeps the department out of even a single such case, the avoided cost would pay for a heck of a lot of hard drives.

The department’s second reservation is “outdated public records laws,” which is a stickier wicket. It’s true that many public records laws, written before the advent of widespread electronic media, don’t always apply to those media well, or at all. But those who are in charge of maintaining and updating those laws — the Assembly and Legislature, in Anchorage’s case — should be wary of attempts to revise them in a manner that decreases accountability for government and police departments. When in doubt, they should err on the side of the public’s right to know, for the same reason that body cameras themselves are a good idea: When information isn’t present or is withheld by authorities, rumors and allegations run wild and distrust grows.

Body cameras won’t be a panacea, of course. Although hopes ran high that the cameras would improve police and public behavior when the devices were first adopted by departments around the country, a major recent study showed that neither officers’ nor the public’s behavior is meaningfully improved by their presence. What the cameras do provide, however, is a dispassionate eye. They won’t see everything. They won’t help in every case. But they will help flesh out a more objective record, especially in cases where the situation is fraught and non-involved witnesses aren’t present. As accountability advocates have noted, those killed by police aren’t around afterward to give their side of the story.