Alaska is turning a corner on COVID-19. Let’s keep it that way. 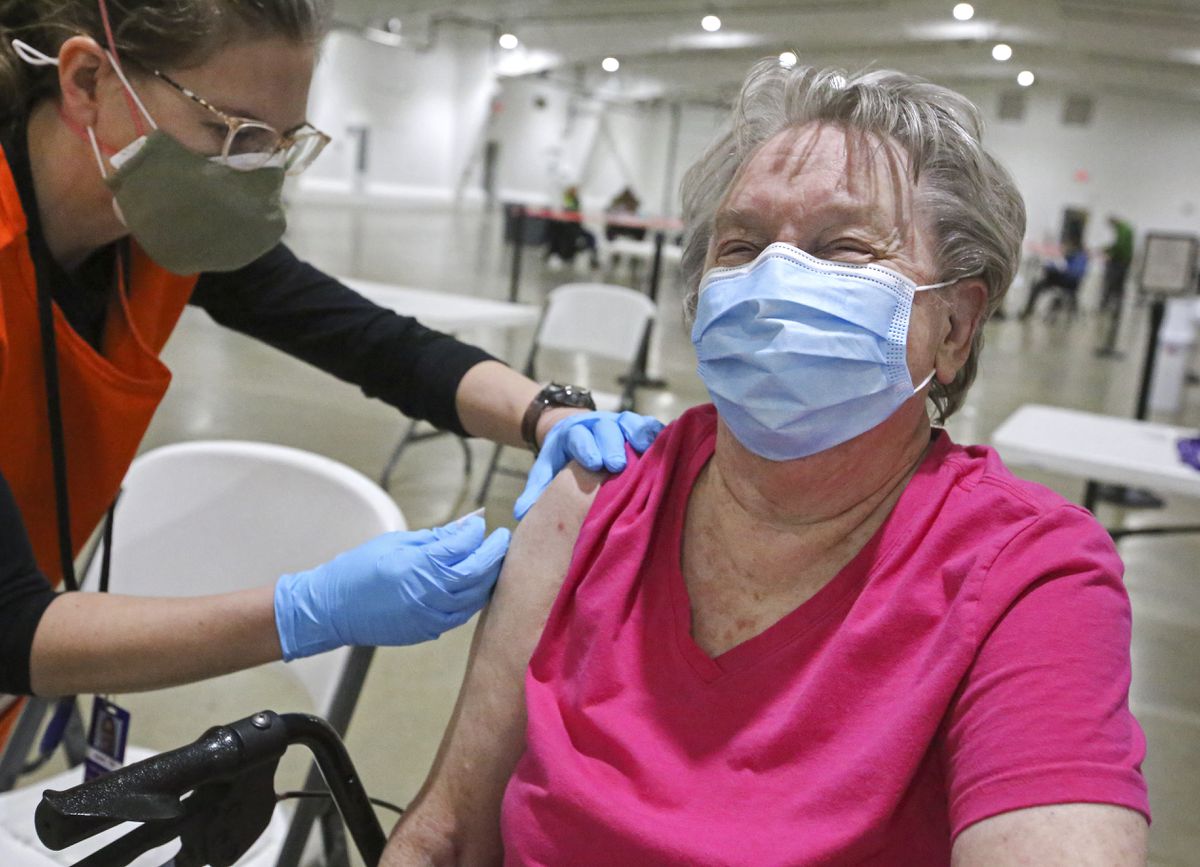 Public Health Nurse Jamie Allison sanitizes the arm of Bonnie Grover, 88, before she administers a dose of the Moderna COVID-19 vaccine to Grover in Palmer on Tuesday, Jan. 12, 2021. (Emily Mesner / ADN)

Public Health Nurse Jamie Allison sanitizes the arm of Bonnie Grover, 88, before she administers a dose of the Moderna COVID-19 vaccine to Grover in Palmer on Tuesday, Jan. 12, 2021. (Emily Mesner / ADN)

On Jan. 20, Alaska recorded a crucial milestone in the COVID-19 pandemic — one of the first positive markers of a difficult 10 months for the state. That day, the Department of Health and Social Services announced that the number of Alaskans who had received their first dose of vaccine against the virus had surpassed the number of Alaskans known to have contracted COVID-19. With vaccinations proceeding at an average of 3,000 per day, we’re now well past that mark; as of Jan. 22, more than 72,000 Alaskans — more than 12% of the state’s over-16 population — had been given at least one dose of the vaccine and almost 15,000 had completed their two-dose series.

Alaska now leads the nation in per-capita vaccinations, and we have ample supply to continue pressing that advantage. It’s the most hopeful news in months. But it doesn’t mean we’re out of the woods yet — we aren’t, and we won’t be for several months. Being cautious now will give us our best chance at saving lives and hastening our state’s economic recovery.

By Jan. 22, DHSS statistics showed that 36% of Alaskans 65 and older had received their first dose of the vaccine. That’s serious progress, given that it was just over two weeks ago that the first doses of the vaccine were administered to members of that group. Aiding in Alaska’s vaccination progress are efforts by tribal health organizations, which have been given their own supply of the vaccines and are making great strides in inoculating the state’s rural and Native population, where the vaccine has hit even harder than in urban centers. In Kotzebue, more than a third of residents have received their first vaccine dose.

Alaska’s high supply of allocated vaccines is also a result of the state’s active-duty military and veteran populations. In addition to the state and Indian Health Services allocations, the Department of Defense and Department of Veterans Affairs get their own supply, and both began issuing inoculations in late December. With so many agencies working in concert to get their communities vaccinated, it’s easy to understand the strides Alaska has made toward ending the pandemic.

As Anchorage’s Acting Mayor Austin Quinn-Davidson told the ADN Wednesday, our progress in limiting the virus’ spread — with little to no spike in cases following the December holiday season — comes down to the good work of individual Alaskans. The state’s average case count has declined almost 70% from the excruciating highs at the end of November that drove Anchorage into a third “hunker-down” period. Schools reopened Thursday for the Anchorage School District’s youngest students, giving working parents flexibility they haven’t had since last March.

And there’s more good news to come: Two more vaccines, from AstraZeneca and Johnson & Johnson, are in the final phase of their clinical trials. If all goes well, they will be approved in the next few months, and vaccine supply will increase dramatically. The Johnson & Johnson shot in particular could be a game-changer for stepping up the pace of vaccination efforts — it requires only one dose and can be kept at standard refrigerator temperatures. That would dramatically ease the difficulty of supplying Alaska’s far-flung rural communities, where ultra-cold freezers aren’t an option for cooling vaccines.

But lest we think our finish line is close at hand, there’s still plenty of time for the virus to roar back if we let it. It would take roughly 4,000 vaccinations per day (a rate slightly better than our average during the past few weeks) to cover 85% of Alaska’s over-16 population by Sept. 1. And although we should begin to see transmission rates start to drop a few months before that as we approach herd immunity, there are still a few months in which most Alaskans will be unvaccinated and susceptible to catching, spreading and succumbing to COVID-19. Given that kids are heading back to school, it’s more important than ever that we keep our guard up and practice the same behaviors that by now should be second nature to us. Wash your hands frequently. Mask up outside your home, especially around others. Keep a healthy six feet of distance between yourself and people outside your household.

The faster and more efficiently we get Alaskans vaccinated, the more quickly we can progress to further tiers and protect those most at risk: essential workers, teachers and immunocompromised community members. The more Alaskans are protected, the safer it will be to reopen our state’s economy, resume more normal activities and even welcome visitors to our state without fear of what they’ll bring with them. But all of this is predicated on us maintaining our vigilance and health practices now. We can keep it up for the next few months, for the good of our neighbors and our community.