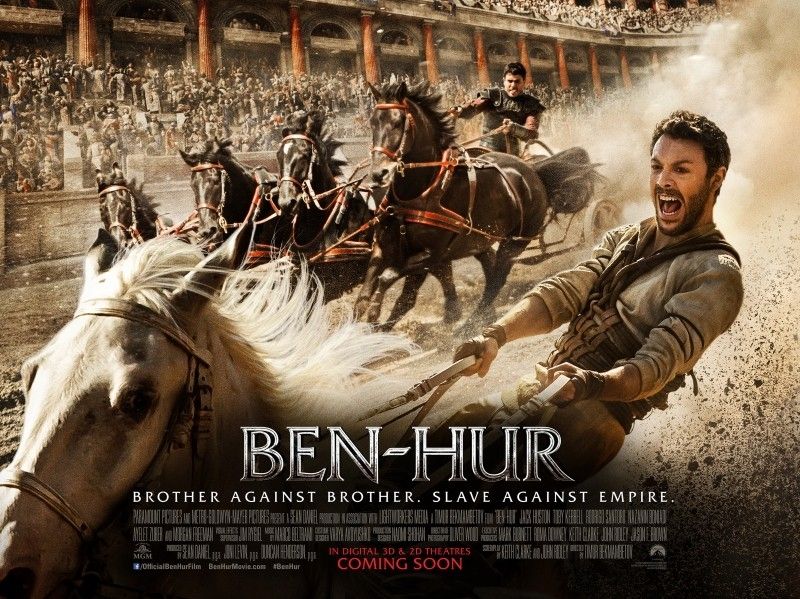 Since Mel Gibson's 2004 blockbuster "The Passion of the Christ" grossed more than $600 million worldwide, Hollywood has slowly begun to look at faith-based movies as a way to fatten their bottom lines and reach a demographic they have mostly ignored for decades.

Last week in Los Angeles, the show business publication Variety co-sponsored another of its occasional programs called "PURPOSE: The Family Entertainment and Faith Based Summit." The summit's goal is to encourage filmmakers to make more movies with faith content from a mostly Christian perspective. Recently there have been some modest box office successes with films like "Heaven is for Real" and "God's Not Dead."

Perhaps the boldest move in this genre is the remake of a classic, "Ben-Hur." The 1959 film starring Charlton Heston won 11 Oscars, including best picture, best director (William Wyler) and best actor (Heston). It too was a remake of a 1925 silent film version adapted from Lew Wallace's 1880 novel "Ben Hur: A Tale of the Christ."

I generally don't like remakes, especially of classics. Many have bombed at the box office, including the 1998 versions of "Blues Brothers" and "Psycho."

The latest "Ben-Hur," opening nationwide Aug. 19, does not try to compete with the 57-year-old version, which is well known to an older crowd and anyone who has seen it on numerous TV broadcasts.

This remake has the golden touch of the husband-wife team of Mark Burnett and Roma Downey (producers of the highly rated "The Bible" series for the History Channel). The story is approached from a different angle without disrespecting the original. It also seeks to reach a younger generation that may be unfamiliar with the previous versions.

Unlike the 1959 film, which included a number of famous actors in addition to Heston, the remake has only one veteran star, Morgan Freeman. He plays the African owner of the Arabian stallions that Judah trains and that draw his chariot in the film's climactic race scene. If you thought the original race was brilliant — and it was — wait until you see the new version and what modern technology has accomplished. Even the credits are worth watching.

There are subtle changes from the 1959 story line. In that film, Judah and his rival, Messala, were childhood friends. In the remake, they are brothers. Messala is the adopted one. In the chariot race scene, the 1959 film ends with Messala's death. In the remake, while Messala loses the lower part of one of his legs, he and Judah are reconciled following a dramatic scene in which Judah witnesses the crucifixion of Jesus of Nazareth and falls to his knees before him. His desire for revenge against his brother for turning him into a slave leaves him and he and Messala are reconciled.

It could have been melodramatic and unconvincing but Jack Huston (Judah), Toby Kebbell (Messala) and director Timur Bekmambetov make it work.

I asked Roma Downey why she and Mark took on such a project. She replied in an email that while the central theme is about reconciliation and forgiveness, "It's not specifically a faith movie … it's an action adventure drama, but it holds in its heart a story of hope. This is the balm our hurting world needs. This is why a Ben-Hur release for 2016 makes sense. We need this message in our country and in our world right now."

The verbal attacks by the main presidential candidates prove her right.

In the not-too-distant past, faith-based movies, if they were made at all, suffered from low budgets and tackiness and were often too preachy. Not this "Ben-Hur."

This is a first-class film released by two first-class companies (Paramount and MGM). It stands on its own as entertainment, but entertainment with a purpose. Go see it. You won't be disappointed.

A father, a son and a culture of abuse in the Louisiana State Police