Trump divided to win; can he unite to govern? 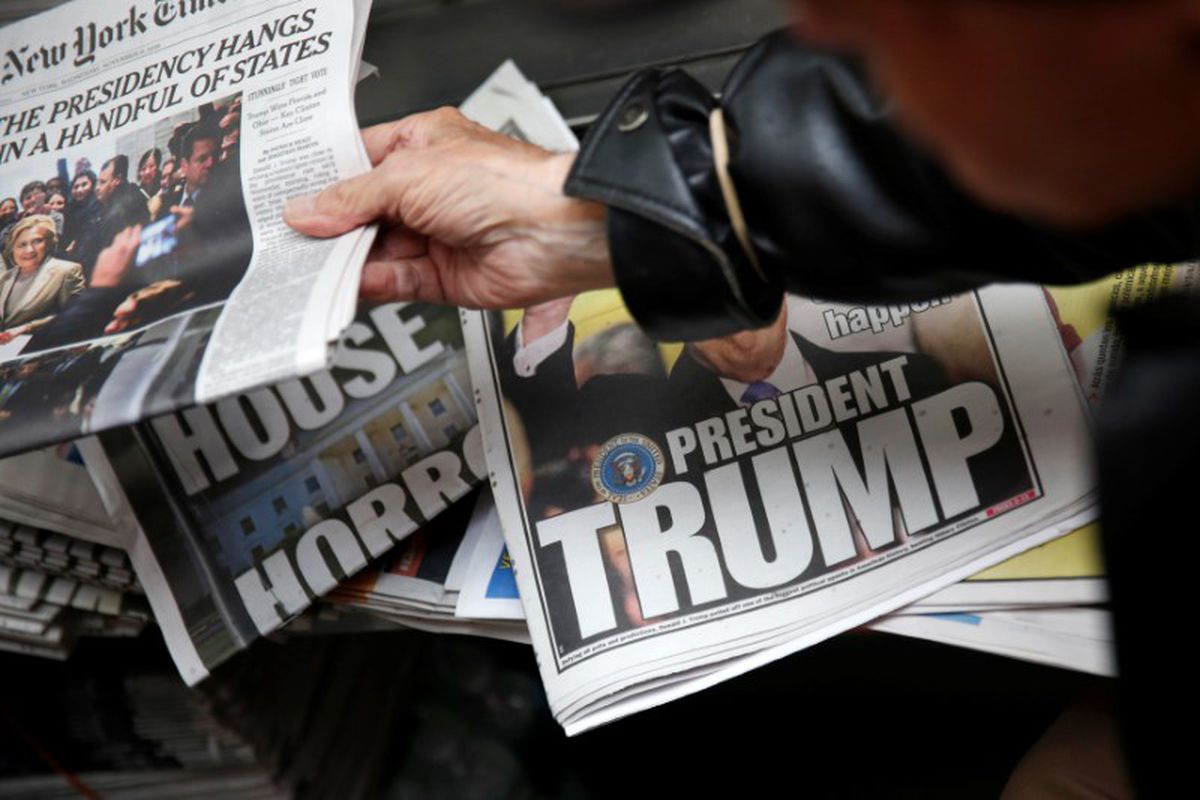 WASHINGTON — Baker Melissa Alt showed up unbidden at Trump Tower on Election Day with a 40-pound cake in the form of a Donald Trump bust, and Trump aides liked the likeness enough to display it in the ballroom at Trump's election-night party.

But there was something wrong with the chocolate confection. Alt was aiming to reproduce Trump's pout, but she wound up making him look startled and sad.

After Tuesday night, that's the exact expression worn by tens of millions of Americans and countless more across the globe.

Just before 3 a.m., the unthinkable had become official. In the ballroom of New York's Hilton hotel, the Fox News screens in the room carried the surreal banner: "Donald Trump Wins Presidency."

The theme from "Air Force One" played. From a balcony above the ballroom, Trump appeared, in the fashion of British royalty or a certain Italian leader. He descended to the stage with family and aides, and the president-elect exulted. "It's been what they call a historic event," he said.

It shocked journalists. It shocked markets, which tumbled. It apparently surprised Trump himself. A petulant Trump on election eve told a crowd a loss would make this campaign "the single greatest waste of time."

Seventeen months ago, Trump descended the elevator at Trump Tower, blocks from his victory party at the Hilton. He began with rapists and criminals, and closed with "bad hombres" and a "nasty woman." In between, there was: his proposed ban on Muslims; violence at his rallies; groping allegations; Miss Piggy; his making scapegoats of minorities; vows to put his opponent in jail; encouragement of Russia's hacking; and a threat not to honor the election results.

Finally, there was FBI Director James B. Comey's October Surprise, reopening his investigation of Clinton and then closing it nine days later — an intervention that, exit polls suggest, may have tipped the balance.

Whatever the cause, at about 9 p.m. Tuesday evening, the world changed. The early returns had looked grim, even on Fox News, playing on all TVs at Trump's party. But when Fox News began reporting a tight race in Florida, guests from the nearby VIP receptions filled the ballroom.

The billionaire candidate offered his supporters a cash bar for the evening, and his anti-elitist followers shelled out $13 for cocktails, $13 for glasses of wine and $11 for beer. The booze flowed. Scores of empty bottles of Jack Daniels and Stolichnaya and beer were carted out, and hundreds of new glasses carted in. More empty liquor bottles were removed, and more cases of wine wheeled in.

['Something is happening that is amazing,' Trump said. He was right]

One Trump aide turned to another with a smile and said, "We may be going to Washington." Rudy Giuliani and other surrogates filed in, and Sarah Palin paused to taunt a reporter about the results.

As the Trump wins dribbled in — Ohio, then North Carolina and Florida — the ballroom audience began to sound like a football crowd: chants of "USA!," "Build a wall" and "Drain the swamp," fists pumping in the air, and plastic cocktail cups (the hotel had run out of glasses) held high.

After Wisconsin and Iowa fell to Trump, almost all on the floor were in red Trump hats, lustily booing Juan Williams when Fox News's liberal commentator, an African American, protested Trump's false statements about black people.

When Clinton campaign chief John Podesta appeared from Clinton headquarters on the Fox News screens in the room to say Clinton wasn't yet conceding, Trump's supporters punched fists in the air and raised middle fingers at the screens. More cases of beer were wheeled in. Next to the bar, the Trump cake still looked worried.

Maybe the human Trump should worry, too. He stirred up racial and religious hatred and stoked gender and class resentments, validated conspiracy theorists and the racist alt-right, employed a vast oeuvre of untruths and promised followers an unachievable agenda. How does he govern now?

When the race was finally called for Trump, he gave an uncharacteristically magnanimous speech, saying we owe Clinton "a major debt of gratitude for her service to our country," promising to be the "president for all Americans," and appealing for "common ground, not hostility; partnership, not conflict."

Congratulations, Mr. President-elect. Let's hope for the sake of the country that you mean it.

The views expressed here are the writer's and are not necessarily endorsed by Alaska Dispatch News, which welcomes a broad range of viewpoints. To submit a piece for consideration, email commentary@alaskadispatch.com. Send submissions shorter than 200 words to letters@alaskadispatch.com

Dana Milbank is an opinion columnist for the Washington Post, writing about political theater in the nation's capital. He joined the Post as a political reporter in 2000, after two years as a senior editor of The New Republic and eight years with the Wall Street Journal.