This woman’s name appears on the Declaration of Independence. So why don’t we know her story? 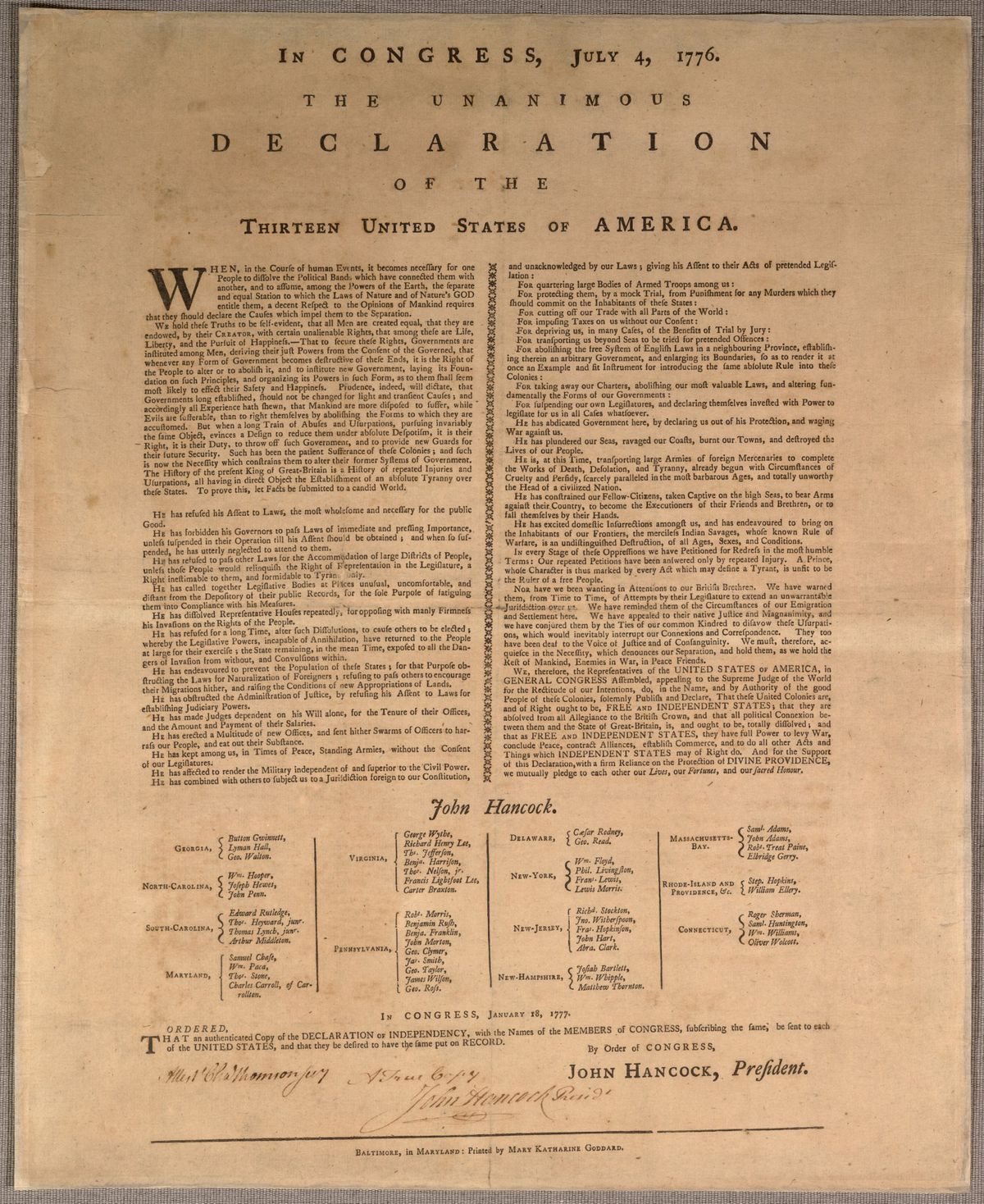 The Declaration of Independence printed with the names of the signers. Mary Katherine Goddard’s name is at the bottom. (Library of Congress, Rare Book and Special Collections Division, Continental Congress & Constitutional Convention Broadsides Collection)

The Declaration of Independence printed with the names of the signers. Mary Katherine Goddard’s name is at the bottom. (Library of Congress, Rare Book and Special Collections Division, Continental Congress & Constitutional Convention Broadsides Collection)

This Fourth of July, look closely at one of those printed copies of the Declaration of Independence.

See it? The woman's name at the bottom?

It's right there. Mary Katherine Goddard.

If you've never noticed it or heard of her, you aren't alone. She's a Founding Mother, of sorts, yet few folks know about her. And some of America's earliest bureaucrats did their best to shut her down. Same old, same old.

Goddard was fearless her entire career as one of America's first female publishers, printing scoops from Revolutionary War battles from Concord to Bunker Hill and continuing to publish after her offices were twice raided and her life was repeatedly threatened by haters.

In her boldest move, Goddard put her full name at the bottom of all the copies of the Declaration that her printing presses churned out and distributed to the colonies. It was the first copy young America would see that included the original signer's names – and Congress commissioned her for the important job.

Her fiery editorials, had, after all, set the tone for pivotal moments in the revolution.

"The ever memorable 19th of April gave a conclusive answer to the questions of American freedom," she wrote in her Maryland Journal editorial after the start of the Revolutionary War. "What think ye of Congress now? That day. . . evidenced that Americans would rather die than live slaves!"

Until Goddard got the assignment from Congress to print and distribute copies of the Declaration, it was more like an anonymous internet post than a document of record.

Beautifully written, boldly stated, it was famously signed by the Founding Fathers on July 4th. But neither Americans nor the British saw that copy.

Instead, days and weeks later, they got a hastily-printed, mistake-laden, nearly anonymous document that was the 1776 version of the ALL CAPS EMAIL signed by PATRIOT1776. Signing your name to something like this was considered treason.

It was done on the night of that July 4, when the founders asked Irish immigrant John Dunlap to print 200 copies. The only names on it were John Hancock and secretary Charles Thomson, who was listed as a witness. It was read to troops on the front lines and a copy was sent to England.

But without all the names of the founders, the Declaration was less devastating.

And by including her name at the bottom, "Baltimore, in Maryland: Printed by Mary Katherine Goddard," she became a patriot worth remembering.

When she ran the Baltimore newspaper that her brother had abandoned, she used the gender-neutral M.K. Goddard.

She was also quietly named the first female postmaster in the colonies in 1775, running the busy and crucial Baltimore Post Office as well as a bookstore, printshop and newspaper. At the time, Congress was meeting just down the street from her office. So she was basically the pipeline for a lot of information during our nation's founding years – her little shop was a combination Washington Post, Snapchat, Facebook, Twitter and Instagram from 1775 to 1784. (It's now a Rite Aid.)

Goddard may have been an early version of The Post's Katharine Graham, but she wasn't the only woman who made history running America's free press.

In 1739, Elizabeth Timothy took over the South Carolina Gazette after her husband died, also taking over his partnership with Benjamin Franklin.

Franklin said the Widow Timothy was far more skilled at business than her husband had been. "Her accounts were clearer, she collected on more bills, and she cut off advertisements if payments were not current," Franklin said according to Kay Mills in A Place in the News.

Goddard eventually lost her job as publisher after her brother married and returned to Baltimore in 1784, taking over the Maryland Journal and ousting his sister.

But she was still the Baltimore postmaster, and ran that office with efficiency and aplomb for a total of 14 years until the newly appointed national Postmaster General moved to replace her with someone with no experience, one of his political pals.

U.S. Postmaster Samuel Osgood said he didn't think a woman could handle all the travel associated with the job, that she didn't have the, ahem, stamina. Remember, it's a job she'd successfully done – along with publishing a newspaper and printing the Declaration of Independence – for more than a decade.

The folks who knew her were outraged and more than 200 merchants and residents in Baltimore sent the postmaster a petition asking to keep her in place. But Osgood held firm and though Goddard fought for reinstatement for years, it was to no avail.

She continued to run her bookstore in Baltimore until her death in 1816.

On this Independence Day, let's also celebrate the story of a forgotten patriot who used the power of the press to help build this nation.

Petula Dvorak is a columnist for The Washington Post.