Limbaugh a conservative? Not even close 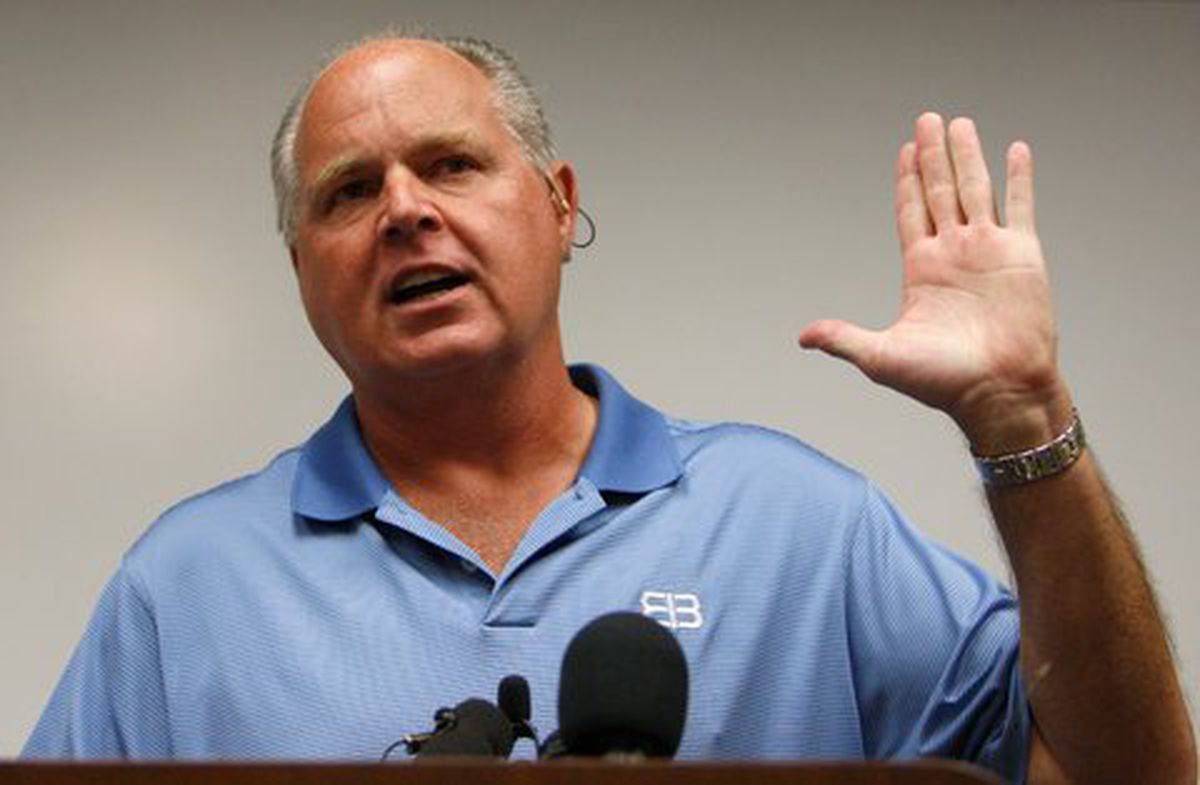 Rush Limbaugh — yes, he's still going around and around on your radio dial. True to his name, he's still rushing in where angels fear to go. And he still tends to leap to every conclusion in sight except the sensible one. Days before Hurricane Irma hit Florida, he decried the rush of anyone with the good sense and/or the good memory to get out of the storm's blustering, shattering and battering way and head for higher ground.

But what, El Rushbo worry? Not on your or your family's lives, which were just what were at stake as Irma took wavering aim at this country's south and east. But calm, cool, collected and utterly misguided as ever, Brother Limbaugh decried what he saw as a panicky exodus to safer parts. It was all just a plot, he explained, on the part of climate-change fanatics out to scare anxious folks.

But that was then. Soon enough the Great Rush decided that retreat is much the better part of valor when an angry hurricane is nipping at one's heels and other tender parts. So he joined the great exodus, which closed highways from Key West, Miami and surroundings all the way to St. Petersburg, Tampa Bayand points beyond. What a sound decision on his part, if a belated one. Better safe than drowned and all that. Seldom if ever has his judgment appeared so sound. So our favorite loudmouth abandoned his broadcast booth in Palm Beach and joined the great hegira and traffic jam, having realized that these days Florida is a great state to get far, far away from.

Who is this Rush Limbaugh anyway? The indispensable In the News column that adorns the front page of The Arkansas Democrat-Gazette every day had to settle for identifying him as "the conservative radio talk show host," which is a wholly understandable error of compression when a copy editor besieged by mere facts has only limited space — a single sentence — in which to sum up the social and political significance of a public figure of some note and notoriety. Said editor might have summed up the late, great Jack Benny as a violinist of his fast fading time, not realizing that Mr. Benny was only joking. Oh, if only Mr. Limbaugh were doing the same now. But fine distinctions tend to blur in rushed circumstances.

It is not the conservative but the radical who believes in giving history a good hard push, maybe over the nearest cliff. Which is not prudent, and, lest we forget, prudence is among the first of the political virtues. A conservative is patient. A conservative takes one careful step at a time before putting his full weight on what might prove a shaky footing. Nor is a conservative eager to speculate with other people's money, or his own. Which is why the Glass-Steagall Act, which barred such games by separating commercial and investment banking, proved its worth many times over, even if others have forgotten its lessons.

It is not the exercise of power the conservative opposes but its abuse, and one sure way to abuse it is not to make use of it when the government very much needs to employ it to protect all of us, as during wartime or when the country is reeling from the effects of a great depression. The conservative is leery of quick fixes in politics, but that doesn't mean he wouldn't fix the system at all.

In the end, conservatism is a matter of taste. It is an inclination rather than a program. It never goes out of style because it's not wedded to one particular style. Instead it sets out to make any necessary changes the way a competent builder does — always in harmony with the original. It does not plunk down a mod glass pyramid in the middle of a great open plaza that has been sacrosanct for generations. Conservatives test the ground before treading on it or on the landmine that waits there. Conservatives understand that any alterations to the scene should be made in harmony with nature and nature's God. For they do not seek to exploit the land for fun and profit but to respect it.

Conservatives would not change an historic site like Monument Avenue in Richmond or change the name of a dormitory at an Ivy League university to placate the super-sensitive who show no respect historical precedent. Conservatives do not constitute a single party but a set of ideas. Conservatives understand that each people has its own customs, and they do not tamper with them lightly.

Conservatives have no grand strategy for all the world but chart their course through history like an old riverboat captain on the Mississippi, proceeding carefully from point to point rather than rushing over waterfalls. But when they do act after sober reflection, they can be decisive — and effective.

Clio, muse of history, does not appreciate having her elbow jiggled as she writes not for just this generation but for all generations to come. She takes the long view, giving her something else in common with conservatism.

Paul Greenberg is an editorial writer and columnist for the Arkansas Democrat-Gazette. Email, pgreenberg@arkansasonline.com.

Paul Greenberg is a Pulitzer Prize-winning editorial writer and columnist for the Arkansas Democrat-Gazette.