‘Conflict is more profitable than peace’ 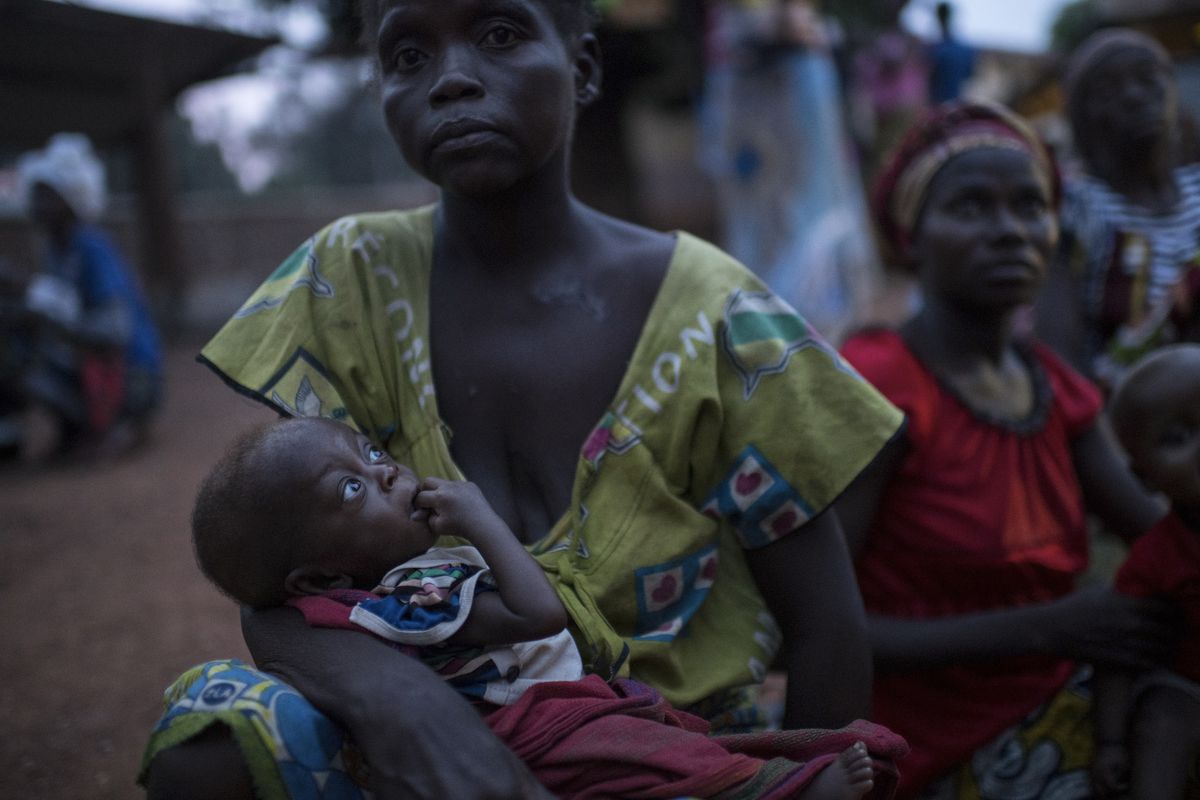 Collette Lundi holds her severely malnourished 8-month-old son, Serge Mbagawan, at a hospital run by an aid group called Alima in Boda, Central African Republic, March 11, 2018. The Central African Republic is arguably the capital of human misery, yet the United Nations says that its humanitarian plan for the country is only 2 percent funded. (Lynsey Addario/The New York Times)

Collette Lundi holds her severely malnourished 8-month-old son, Serge Mbagawan, at a hospital run by an aid group called Alima in Boda, Central African Republic, March 11, 2018. The Central African Republic is arguably the capital of human misery, yet the United Nations says that its humanitarian plan for the country is only 2 percent funded. (Lynsey Addario/The New York Times)

BAYANGA, Central African Republic — Perhaps the most devastating blow any human can suffer is to lose a child, and Julienne Moada has already lost three. A Pygmy living on the edge of the jungle in what may be the world's most wretched country, she has borne five children and now cradles little Bruno, a fourth in peril, with fierce devotion and desperation.

Bruno, severely ill with malaria, barely responded to his mother's caresses. Here in a country torn apart by civil war and ethnic cleansing for 14 years, where government is mostly just a rumor, kids die routinely because of the chaos and dysfunction. Still, Moada sat beside her hut made of leaves and dared to be optimistic. "I think he's a little better," she said hopefully.

I'm on my annual win-a-trip journey, in which I take a university student with me on a reporting trip, and this year the winner is Tyler Pager of Northwestern and Oxford Universities. We came to Central African Republic, arguably the capital of human misery, because it constitutes one of the most neglected crises in the world.

Central African Republic ranks No. 1 as the hungriest country, according to the latest Global Hunger Index. A quarter of the population has been forced to flee fighting, and the Red Cross warned that humanitarian conditions were "rapidly deteriorating." Yet the United Nations says that its humanitarian plan for CAR is only 2 percent funded.

This country also embodies a larger truth: For thousands of years, humanity's greatest challenge was poverty and disease, but increasingly it may be conflict.

That's because we're making huge strides in most places, with the share of the world's population living in extreme poverty dropping from about 90 percent in the early 1800s to less than 10 percent today. Yet there are exceptions like CAR, South Sudan, Yemen and the Democratic Republic of Congo that are horribly off track — because they are ruled in parts not by governments but by gunmen.

So we must rethink the global war on poverty. These days, the world should tackle conflict as aggressively as it fought AIDS. Donors need to focus not just on building wells or schools but also on building peace. This may make liberal doves uncomfortable, but the blunt reality is that in some places the most important humanitarians are the peacekeepers carrying weapons.

Yet President Donald Trump has slashed assistance for U.N. peacekeeping, and his ambassador to the United Nations, Nikki Haley, boasted in a tweet that the administration was "only getting started" cutting back on peacekeeping. Haley, please understand that without peacekeeping, you're sentencing civilians to be raped and shot — and boys like Frederick Pandowan to starve.

We met Frederick in the western CAR town of Boda, at a hospital run by an aid group called Alima. He's 5 years old, emaciated, with ribs pressing through his flesh, and weighs just 19.6 pounds. That's less than half the weight of an average 5-year-old in America.

His mom, Tefole Raissa, explained that they had fled fighting and no longer have land. "I can't farm now," she said. She doesn't remember the last time she ate meat or eggs; the family gets by on one evening meal a day of cassava, a starchy tuber with negligible nutrition.

This country is lush, with vast areas of untilled land, and nobody should go hungry. But violence changes everything. Collette Lundi, the mother of one desperately malnourished boy fighting for his life in a hospital, said her husband had been killed by a militia and their house destroyed, leaving the family with nothing to eat but small amounts of cassava.

I asked if she ever eats meat.

She nodded and explained, "We try to catch rats."

Central African Republic is preyed upon by some 14 militias. At times there has been Christian-Muslim fighting, but these days the militias are less ideological than entrepreneurial. They routinely set up checkpoints to "tax" every vehicle that passes — when they don't simply steal trucks or goods.

"Conflict is more profitable than peace," noted Neal Kringel, a senior U.S. diplomat for the region, highlighting what needs to change.

Insecurity means that the government operates few clinics, so women die in childbirth at one of the highest rates in the world. Aid becomes expensive and dangerous to provide: Gunmen killed 16 humanitarian workers here last year, and six more so far this year, making CAR one of the most perilous countries for aid workers.

"Without security, we will not make progress," said Christophe Droeven, the director in CAR of Catholic Relief Services, an aid group we traveled with for several days.

Yet it's not hopeless. Sierra Leone, Mozambique and Liberia have come back from chaos and civil war to establish security. In Congress, the Global Fragility and Violence Reduction Act, which has been introduced with bipartisan backing, would develop strategies to tamp down conflict. In general, top-down peacekeeping helps, as does bottom-up peace-building.

We visited peace-building programs organized by Catholic Relief Services to reduce tensions between Muslims and Christians. In one project, 125 people were paid $3 a day each to dig drainage ditches — but on the condition that Christians and Muslims work together.

"It's my first time to be mixed with Muslims," Marlene Wabangue, a young Christian mother with her baby daughter on her back, told me during a break. "But I'm not scared of them. I'm fine with them."

Mercy Corps, another aid group, says that its peace-building projects in CAR have been very successful, even leading to voluntary disarmament.

"Today, conflict is the driver of extreme poverty," said Neal Keny-Guyer, the president of Mercy Corps, and he warned that climate change might exacerbate the conflicts. The upshot, he said, is that the world needs to work on building peace as aggressively as it has tackled malaria and AIDS.

I realize that for many Americans, these issues seem as remote as if they unfolded on Mars — and hopeless to boot. But the truth is that the war on global poverty is one of humanity's great successes, with more than 100 million children's lives saved just since 1990.

We must ensure that peace is more profitable than conflict. As the mayor of Boda, Boniface Katta, told us, "Without peace, nothing can be done."

Nicholas Kristof is an opinion columnist for the New York Times.