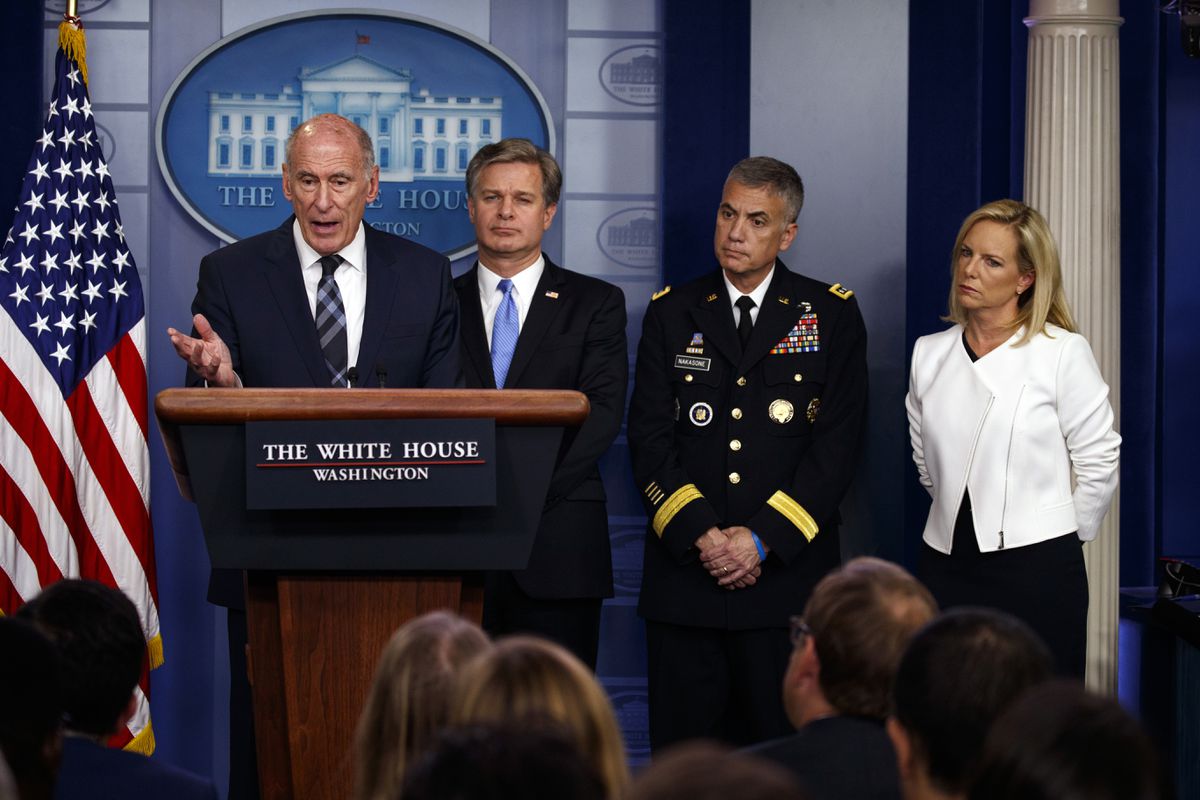 The disconnect between President Donald Trump and his administration has never been starker than it was on Thursday.

Early that afternoon, a phalanx of top national security officials marched to the White House briefing room to warn about what Daniel Coats, the director of national intelligence, described as "a pervasive messaging campaign by Russia to try to weaken and divide the United States." Though they didn't announce any fresh initiatives, the officeholders reported on a number of existing ones, from the Department of Homeland Security's efforts to bolster local election infrastructure and an FBI task force designed "to root out and respond to foreign influence operations" - in the words of FBI Director Christopher Wray - to the National Security Agency's more secretive cyberwarfare operations. "We acknowledge the threat," Coats said. "It is real. It is continuing. We are doing everything we can to have a legitimate election that everyone can have trust in."

A few hours later, Trump took to the stage at a rally in Wilkes-Barre, Pennsylvania. He spent much of his time reprising his election victories and railing against "fake news." Here is what he had to say about Russia: "In Helsinki, I had a great meeting with Putin. We discussed everything. We got along really well. By the way, that's a good thing, not a bad thing. That's a really good thing. Now, we are being hindered by the Russian hoax. It's a hoax, OK?"

The fact that Trump views the documented Russian attack on our democracy in 2016 as a "hoax" - and that he evidently refuses to acknowledge that Russia is still targeting the United States - renders hollow the assurances of his intelligence and security chieftains that they are protecting the country. National security adviser John Bolton made an unintentionally revealing statement when he said "the president has made it very clear, I think, what his priority is." Yes, he has, and it's not defending America. It's defending himself from charges - buttressed by a growing body of evidence - that his campaign was guilty of colluding with Russia to win the election, and that he then obstructed the lawful investigation of Russian subversion.

Trump is worried not about the Russian attacks on the United States but about the public relations damage he may suffer from ignoring them. That's why, after more than 18 months in office and fewer than 100 days before the midterm election, he finally convened a short, pro-forma National Security Council meeting to address the topic on July 27 and then asked his intelligence chiefs to brief the White House press corps. But while all of the individual agencies are doing their level-best, they are lacking what they most need: high-level direction and support.

The very fact that there were so many officials on that stage - representing the FBI, the NSA, the National Security Council and the Department of Homeland Security - shows how important it is to have central coordination. And it's not just a question of smashing bureaucratic barriers to get individual government agencies to work more smoothly together. It's also imperative to create a more effective private-public partnership.

The information warfare from Russia, China, Islamic State and other malign actors primarily targets private platforms such as Facebook, YouTube, Twitter and Instagram. The social media companies are showing greater awareness of the threat and are doing more to combat it - witness Twitter removing millions of fake accounts and Facebook closing down pages and fake accounts that are believed to be Russia's handiwork. But private companies will likely lack the capability to defeat sophisticated, state-sponsored attacks. Government agencies have those capabilities, but they lack a clear mandate to protect private websites from foreign intrusions.

To enable a more effective defense against a growing threat, we need a president who will bang heads together and force the three-letter agencies in Washington to cooperate with the social media monoliths in Silicon Valley. The government could even set up a "fusion center" in Silicon Valley to bring together the best experts from the public and private sectors to work together.

Beyond that, the government needs to raise public awareness of the threat to mobilize individuals to call out and combat information attacks online. The Department of Homeland Security has raised awareness of terrorism with its "If you see something, say something" campaign. We all know to call 911 if you see a suspicious package that might contain a bomb. But who do you call if you see a suspicious Twitter account that may be a Russian bot? How do you even identify a Russian bot?

Little is likely to happen without presidential leadership, which for mysterious - and suspect - reasons is absent. There isn't even a coordinator for cyberthreats at the National Security Council since Bolton pushed out the well-regarded NSA veteran who used to hold that portfolio. Tom Bossert, who stepped down in April as the domestic security adviser, complained to Yahoo News: "On cyber, there is no clear person and or clear driver, and there is no clear muscle memory. . . . The concern would be who's minding the store in the coordination and development . . . of new and creative cyber policies and strategies."

It’s hard to avoid the suspicion that Trump is perfectly happy that no one is minding the store. Much as he may claim, preposterously, that the Kremlin favors the Democrats, he knows that the Russian intervention helped him to win in 2016. He may well be hoping for similar help in the future.

Max Boot, a Washington Post columnist, is the Jeane J. Kirkpatrick senior fellow for national security studies at the Council on Foreign Relations and a global affairs analyst for CNN. He is the author of “The Corrosion of Conservatism: Why I Left the Right."