Trump is hell-bent on ‘owning the libs’ 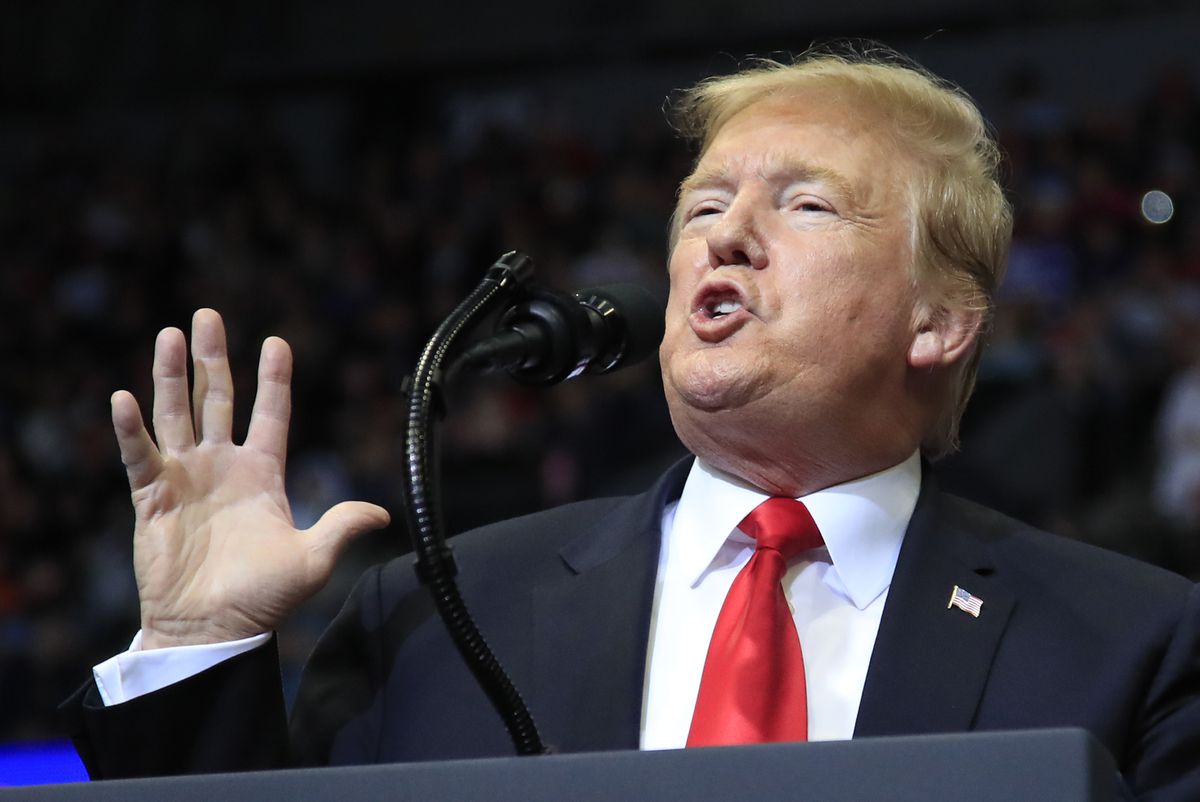 President Trump is looking into giving a free trip to San Francisco, New Orleans or other great American cities to tens of thousands of refugees from Central America. All so he can own the libs.

"Owning the libs" is one of those phrases to have emerged over the last few years that vacillates between earnestness and irony. For people who use it earnestly, it means to do something, usually symbolic and petty, that infuriates liberals out of proportion to the deed to make fools of them. For instance, wearing a MAGA hat to a feminist poetry reading at a co-op bookstore in Berkeley. It's a form of taking the culture war to the enemy.

The ironic form of the phrase is to engage in unwitting self-sabotage while making a political point. When pro-Trump internet troll and conspiracy theorist Jack Posobiec (now a "correspondent" at One America News) had his wedding rehearsal dinner catered by Papa John's Pizza -- then unpopular with the libs -- that was some righteous lib-ownage. Hence one Twitter user's response to Posobiec catering choices: "Eating horrible pizza at my wedding to own the libs."

(There's even a Twitter account called "Own The Libs Bot" (@OwnTheLibsBot) that churns out made-up but often all-too-plausible examples of ironic lib-owning: "Defending pederasty to own the libs." "Getting a Confederate flag face tattoo to own the libs."

Much of Trump's populist appeal stems from his willingness to go out of his way to own the libs.

Give the president credit: He is a kind of savant at the genre, particularly in his preferred métier of Twitter. Tweeting footage of the 9/11 attacks while criticizing Rep. Ilhan Omar (D-Minn.) last week is a good example, but his Colin Kaepernick tweets and calls to revoke media broadcast licenses are part of the canon. His defenders think this stuff is brilliant because it keeps the base riled up and, allegedly, produces gallons of delicious liberal tears. When you point out that such tweets offend more voters than they attract, "Shut up," they explain.

But no lib-owning tweet can hold a candle to Trump's announcement over the weekend that he is considering busing thousands of refugees to "sanctuary cities."

Many conservative commentators have celebrated this triumph of lib-owning, even as they concede in mumbled parentheticals that it won't actually happen -- not least because it's almost certainly illegal without congressional authorization, which will never materialize. But some conservatives continue to defend Trump's theatrics on the grounds that people should take him seriously but not literally. But taken either way, the idea is nuttier than a squirrel's preferred last meal.

Stemming illegal (and sometimes legal) immigration is the president's signature issue. Moving the thousands of refugees currently in detention to sanctuary cities is literally achieving the opposite of his goal.

Moreover, the reason there's a refugee crisis at the border is that desperate Central Americans believe this is their now-or-never moment to get asylum in the United States. What will happen when video of buses depositing refugees in Colorado, Vermont or Oregon is broadcast across South America?

Trump keeps asserting that these refugees are an army of invading murderers, rapists and drug dealers -- and apparently he thinks most Americans believe him. So of course, House Speaker Nancy Pelosi and other San Francisco liberals must be terrified that the president has called their bluff.

The thing is, most immigrants who are in the United States illegally end up going to these very localities. Sixty percent of them reside in just 20 metro areas, most of which have adopted sanctuary policies and limited their cooperation with immigration enforcement. In other words, Trump is proposing fulfilling the final leg of the travel plans of every caravan working its way through Mexico.

During the 2016 campaign, Trump made Kate Steinle, the San Francisco woman who was tragically shot and killed by a man who'd been previously deported five times, into a martyr for his cause. Trump's logic suggests we need more Kate Steinles to own the libs.

Trump's trolling could pay off if some Democrats -- say, Rep. Alexandria Ocasio-Cortez of New York -- call on Pelosi and Congress to take the president up on his offer. Then, Trump could say, "See! The Democrats really do want open borders!"

That such a scenario is not unimaginable is further proof that our politics can always get dumber.

Jonah Goldberg is a fellow at the American Enterprise Institute and a senior editor of National Review. His new book is "Suicide of the West: How the Rebirth of Tribalism, Populism, Nationalism, and Identity Politics is Destroying American Democracy." Email goldbergcolumn@gmail.com