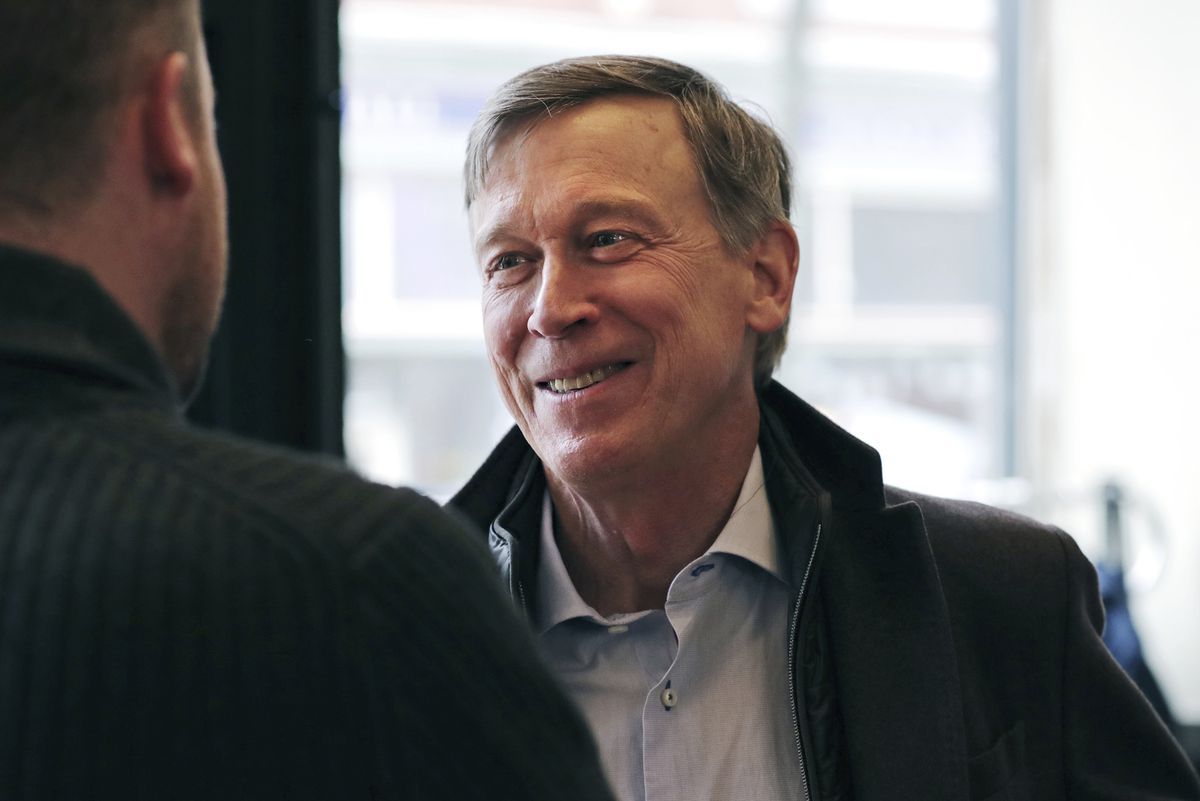 FILE - In this March 22, 2019, file photo, former Democratic Colorado Gov. John Hickenlooper talks with AmeriCorps members prior to a roundtable campaign stop in Manchester, N.H. Hickenlooper is proposing a $15 federal minimum wage _ with a twist. Rather than unilaterally hiking the national wage to $15, the former Colorado governor proposes phasing in the increases based on the cost of living. (AP Photo/Charles Krupa, File)

FILE - In this March 22, 2019, file photo, former Democratic Colorado Gov. John Hickenlooper talks with AmeriCorps members prior to a roundtable campaign stop in Manchester, N.H. Hickenlooper is proposing a $15 federal minimum wage _ with a twist. Rather than unilaterally hiking the national wage to $15, the former Colorado governor proposes phasing in the increases based on the cost of living. (AP Photo/Charles Krupa, File)

Let’s say you are a presidential candidate with an impressive record and a belief that you are the electable choice who can bring people together across party lines. And let’s say, further, that your name is not Joe Biden.

How do you make yourself noticed in a field of 23 Democratic contenders?

If you are John Hickenlooper, former governor of Colorado and mayor of Denver, the answer is to stand before several thousand of the Democratic party's most liberal activists and say things that are guaranteed to get you booed.

Things such as "socialism is not the answer." And that most people don't want to give up their private health insurance for a government-run system. And that "we shouldn't try to tackle climate change by guaranteeing every American a government job," which was an unmistakable dig at the Green New Deal.

"You know," Hickenlooper said over waves of jeering at last weekend's California Democratic Party Convention here, "if we're not careful, we're going to end up reelecting the worst president in American history."

Hickenlooper is far from the only Democrat of stature to have that concern about the party's leftward turn, though few would put it so bluntly and publicly. And some were understandably furious that one of their own would echo the kind of caricature Republicans paint of liberal proposals.

Labor activist Jonathan Tasini told my colleague David Weigel he felt the state convention had been "red-baited." Washington state Gov. Jay Inslee, who followed Hickenlooper on the stage, seized the moment by introducing himself as "a governor who doesn't think we should be ashamed of our progressive values."

But the following morning Hickenlooper sat down with me at a downtown coffee shop and pronounced himself satisfied that his message had connected - if not with the delegates in the Moscone Center, then with a larger audience of Democrats across the country.

His speech and the reaction it received lit up Twitter, was mentioned on two national Sunday television shows and got repeated airplay on MSNBC and CNN. In Iowa, it made the front page of the Gazette in Cedar Rapids.

Hickenlooper was not the only one to get booed at the convention, where 14 Democratic presidential candidates spoke over two days last weekend. Former Maryland congressman John Delaney did as well when he criticized the proposed single-payer system that its backers have branded Medicare-for-all.

But Hickenlooper's gambit was a more sweeping indictment of the left, and it came from a figure long admired in the party. As a popular purple-state governor, Hickenlooper during his two terms oversaw a resurgent Colorado economy, expanded health-care coverage and signed more stringent gun-control measures after the 2012 mass shooting at an Aurora movie theater. While mayor of Denver from 2003 to 2011, the former geologist and brewery owner was widely regarded as one of the most effective city leaders in the country.

"I'm the one person who's done what everyone else is talking about," he said. "I've got to go out and get attention. My challenge is that what I'm selling is hard to communicate in sound bites."

It was not so long ago that a résumé such as Hickenlooper's represented the straightest path to the White House. Four of the five presidents elected from 1976 through 2000 had been governors. They presented themselves to voters as bridge-building achievers with crossover political appeal.

But in this hyperpolarized, hyperpassionate moment, governors have lost their aura.

There were no fewer than nine current and former governors in contention at the outset of the 2016 GOP primary, and Donald Trump, a celebrity real estate developer with no government experience, swept past them all.

Campaign finance laws offer members of Congress who decide to run for president a leg up by allowing them to transfer money from their existing federal accounts, while state and local officials have to build their treasuries from scratch. More importantly, Washington politicians get the kind of media exposure on national issues that can undergird a base of financial and political support across the country.

Hickenlooper is barely registering in the polls, and his fundraising lags the more talked-about candidates in the field. If he cannot amp up both, he will not make the stage for the third debate in September, when the party imposes more stringent qualifications.

For now, Hickenlooper has practically taken up residence in the state that will hold the first presidential contest next February, campaigning one living room at a time. "I've got to move the needle in Iowa, and it will be slow at first," Hickenlooper said.

Over the longer term, he added, “as I keep working it, I will find more noteworthy ways to communicate the principle that working together, we’re going to get further faster than working against each other.” Is there a market for that among Democrats? Give Hickenlooper this much: At least, he’s found a way to get their attention.