The US women’s national team is an American treasure. Pay them a bounty. 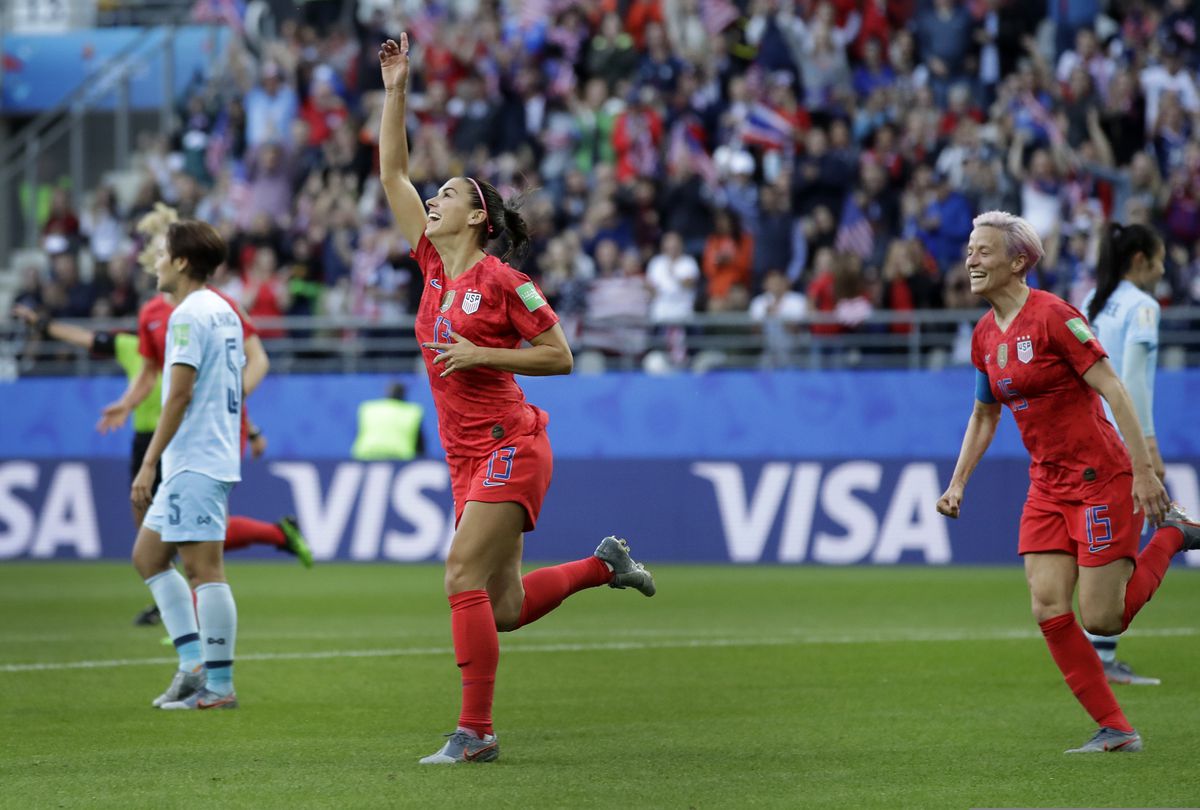 Picture the expressions of U.S. Soccer Federation officials every time Alex Morgan went lightly skipping down the pitch and scored another goal in the Americans’ opening match of the women’s World Cup. The falling faces, the slack mouths, the groans and the fingertips pressed to their creased foreheads, as their legal position became ever more indefensible.

Just imagine how that record-setting 13-0 victory over Thailand will play at a jury trial. It's going to be a lot of fun watching lawyers for the soccer federation try to justify why the U.S. Women's National Team, with their air rifles for legs, are paid 38 cents on the dollar compared to their male counterparts and had to sue for fair wages. It's going to be pure entertainment listening to federation president Carlos Cordeiro stammer out an explanation on the witness stand of why this team, which is nothing short of an American damn treasure, isn't worth equal coin to a men's squad that can't beat Jamaica.

I don't want to hear another word about whether the Americans scored too much or over-celebrated. This is a team in full attack mode, fighting not just to win a World Cup, but to prove a larger point about their worth. They've been denied fair pay compared to their men's team for years and they're out to make a statement about just how good they are, both on the pitch and in the court of public opinion. You don't make up a chronic pay gap with ladylike restraint. You do it by kicking through a wall.

I also don't want to hear another word about the bigger size of revenue in the men's World Cup. You think American networks and corporations are paying large rights fees and sponsorship deals for a USA men's team that couldn't even qualify for the World Cup field and hasn't won an Olympic medal since 1904? You think Fox and ESPN got into a bidding war for the English language rights to the 2018 and 2022 World Cups all for a men's squad that gets whipped by Venezuela?

No. The women's program is the entire backbone and inspiriting force of soccer in the United States - and has been since 1996. "A crown jewel," is what one Fox executive called its telecast of this women's tournament.

You think Nike committed $120 million to USA soccer back in 1997 because of a men's team that finished 10th in the Atlanta Olympics with a 1-1-1 record? Or do you think the company's interest had something to do, just maybe, with Mia Hamm and Julie Foudy and Michelle Akers commanding an audience of 90,000 at the Rose Bowl and 40 million on TV?

Every dime of largesse that the American soccer federation now enjoys can, in some way, be traced to the apple-seeding done by the women's team.

If you watched them against Thailand, saw the nifty foot-sparring of Morgan, whose toework seems learned at the ballet barre, and Megan Rapinoe, who sprints like a languid jaguar, how Carli Lloyd kept accelerating long past the point that the game was won and the point proved, then you know that there is simply no adequate explanation for the gap in their pay. It's just a baked-in disparity from the bad old days.

Twenty years ago, a few women who really cared about the game were willing to put up with just about anything to compete. They were isolated outliers, so committed to playing for their country that they were willing to accept just $10 a day - that was their per diem in 1996. That year, the federation promised the American men a bonus for every game they won in the Olympics. They told the women they'd only get one if they won a gold medal. And that's been the lopsided tone, and lousy proportional pay standard, ever since.

It has persisted despite a steady continuum of success on the pitch from Beijing to Athens to Reims, three World Cup titles, and four Olympic gold medals, a No. 1 ranking in 10 of the past 11 years. They played the game so well for so long, a steady drumbeat of success, in hopes their sheer excellence would wear down the obstacles to some basic equity in pay and treatment. Only it didn't.

Along the way with every step they've broadened the worldwide soccer market. The early returns on Fox's ratings are astounding - the ratings for the first two days were up by 79 percent over 2011, and that was before the USWNT even took the field in Reims. Streaming is up 375 percent. The England vs. Scotland opener commanded a 37.8 percent share of the U.K. audience, the most-watched women's football game of all time in that country.

So imagine what the ratings will do after the USWNT came out with that staccato scoring blitz of 13 goals - more goals than the U.S. men's team has managed in total over the past four World Cups (counting 2018, for which the USMNT failed to qualify).

At this point, USA soccer officials should reach into their own pockets to cover the pay gap, because the USWNT hasn't just lifted the entire sport in this country. They've lifted the women's game globally, and that has benefited all of FIFA. More and more countries are taking the women's game seriously, because there's money in it - and the reason there's money in it is the USWNT. Nike predicts the 2019 tournament will be a "tipping point" for an explosion in the women's game and is flooding it with sponsorship money. Companies want growth - and guess where the USWNT revealed a huge new pocket of available growth?

The U.S. men's team, American soccer in general, the women's game universally, and FIFA residually, have all profited from the consistent performance, character and charisma of the American women, with their unflagging handoff of values from generation to generation.

The only entity getting shorted is the one floating all of these boats ever higher in the water.

So I don't give a rip about FIFA revenue generated by men's teams in Germany or Brazil. American soccer officials answer to American laws on equal pay for equal work. FIFA's worldwide revenue is irrelevant - except to male officials who use them to make a phony circular argument that this spectacularly performing women's team is somehow not quite earning its keep compared to the men. What an utter fallacy. The issue is not whether Alex Morgan should be paid like Lionel Messi. The issue is that she's played more games, won more medals, commanded more viewers, and produced more revenue than her chronically disappointing American brother, and yet is paid a fraction of what he makes for his poorer, lesser performance. It's discrimination, pure and simple - insupportable, unpardonable.

The United States has been slow to fully embrace soccer. The world has been slow to embrace the women’s game. Over the past two decades, only one team has converted both audiences. Pay them for it.