If you question whether many Chinese people want democracy, look at Hong Kong 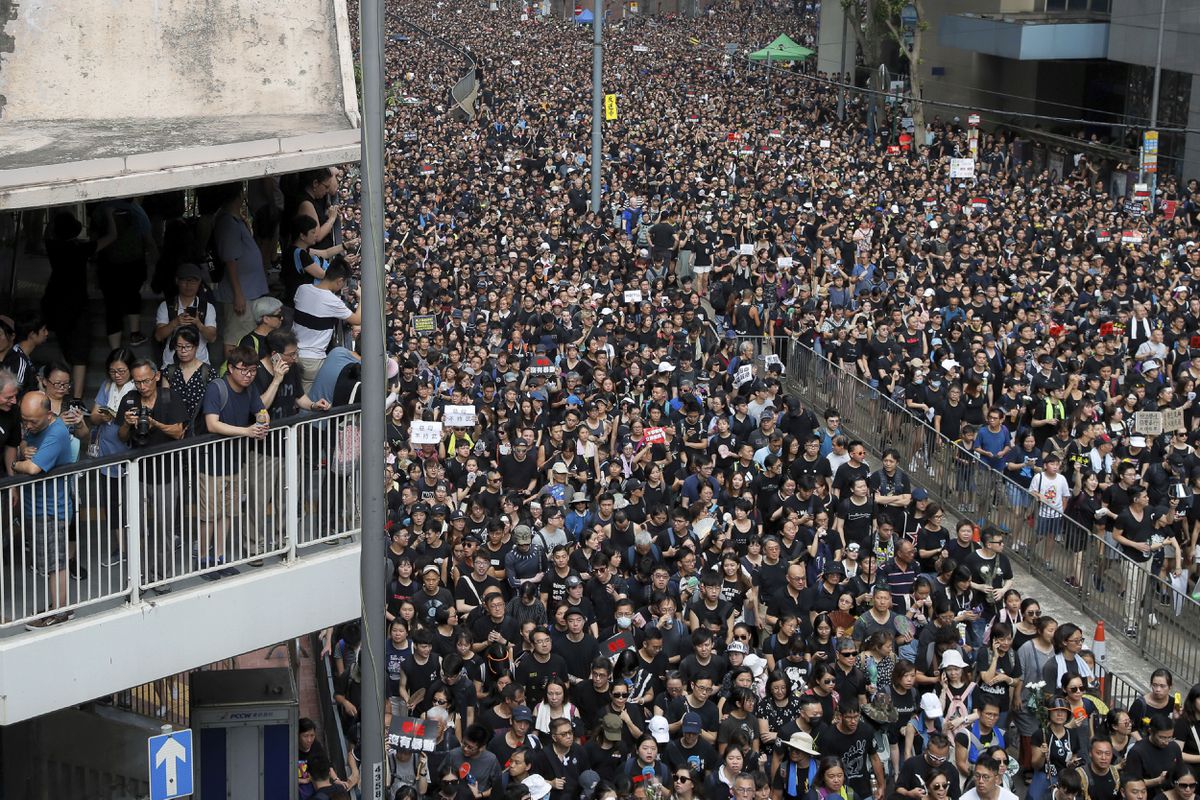 WASHINGTON -- Sometime in the past decade, neoliberals began nervously checking their premises about the inevitable triumph of liberal market democracy. Maybe civil liberties, the rule of law, and free and fair elections weren’t so easily installed in societies that had never enjoyed them. Maybe those attributes weren’t essential for economic growth, either. Worst of all, it began to seem possible that maybe billions of people in the world weren’t even particularly interested in them. The market liberals who had once confidently debated “When will China democratize?” began lopping the first word off that question.

There's a strong argument that China won't democratize anytime soon. Chinese elites sincerely view democratization as a threat, not just to their own position but also to prosperity and social order. And the Chinese Communist Party has produced quite a lot of both over the past few decades, however appalling some of its production tools are.

But if you question whether any serious number of Chinese people even want democracy at the moment, you have only to look at the stunning images that came out of Hong Kong this weekend, as a reported 2 million people poured into the streets to protest a proposed law that would allow criminals to be extradited to mainland China.

Hong Kong has only 7.4 million people; an equivalent protest in the United States would have seen 88 million people clogging every major artery. They marched even though police had waded into an earlier demonstration against the controversial extradition bill with tear gas and rubber bullets, injuring more than 70 people. Or perhaps they marched because of that.

We can't know what attitudes toward civil liberties and similar democratic institutions are on the mainland, because it would be impossible to get honest answers to such sensitive questions under a regime that exercises tight control over its citizens.

What we can know is that, in Hong Kong, people are willing to defy such a regime to preserve their liberty. Maybe liberal institutions are an acquired taste, but maybe once you've had a taste you will never be satisfied with anything else. That may be why the Chinese, having taken Hong Kong back from the British in 1997 as a "Special Administrative Region," have encountered such fierce resistance to making Hong Kong less special and more administered.

That was one theory of how China would eventually democratize: The more the United States traded with them, the more Chinese people would come to the United States to study or do business. As we imported their cheap manufactured goods, we would export the idea that it is the people who tell their governments what to do, rather than the other way around.

It all sounded splendid to us good liberal democrats. But China's leaders were also aware of the theory -- and what we hope for, they fear. With China's integration into the world economy deepening, the past few years have seen, not a gradual relaxation of political control, but a sharp movement in the other direction.

The mainstays of civil society -- lawyers, journalists, nongovernmental organizations, academics and religious groups -- have all come under unrelenting pressure from a government that sees them as destabilizing forces. And techno-futurists have seen their optimism about the censorship-defeating capabilities of the Internet dramatically rebuffed by Beijing, which has effectively barred its citizens from seeing content that displeases the government.

Yet Hong Kong still offers market liberals one reason for optimism: After initially standing firm against the swelling extradition protests, the Chinese government eventually backed down. That's a sharp contrast with what happened during Hong Kong's last big wave of civil protest, the Occupy Central campaign for democratic elections in 2014, which the government ended without making any concessions. This time, Hong Kong chief executive Carrie Lam offered a public apology and said the legislative process on the bill would be indefinitely suspended. (Protesters want the suspension made permanent.)

What was different this time? Arguably, the Chinese government capitulated to Hong Kong's powerful business interests. In 2014, the Hong Kong Chamber of Commerce opposed Occupy Central, warning that it would be bad for business. This time around, big multinationals offered workers flextime to strike.

But that optimism should be, at best, measured. Business stood up against extradition when it wouldn't stand up for democracy. The rule of law is vital to businesses, especially multinationals. Democratic governance, it would seem, is not.

While markets may nudge at least one part of China in a more liberal direction, the country’s citizens are probably going to have to walk most of the way on their own. And it’s far from clear they can finish that journey with the Chinese Communist Party standing in their way.

Megan McArdle is a Washington Post columnist and the author of "The Up Side of Down: Why Failing Well Is the Key to Success."