Five myths about the moon 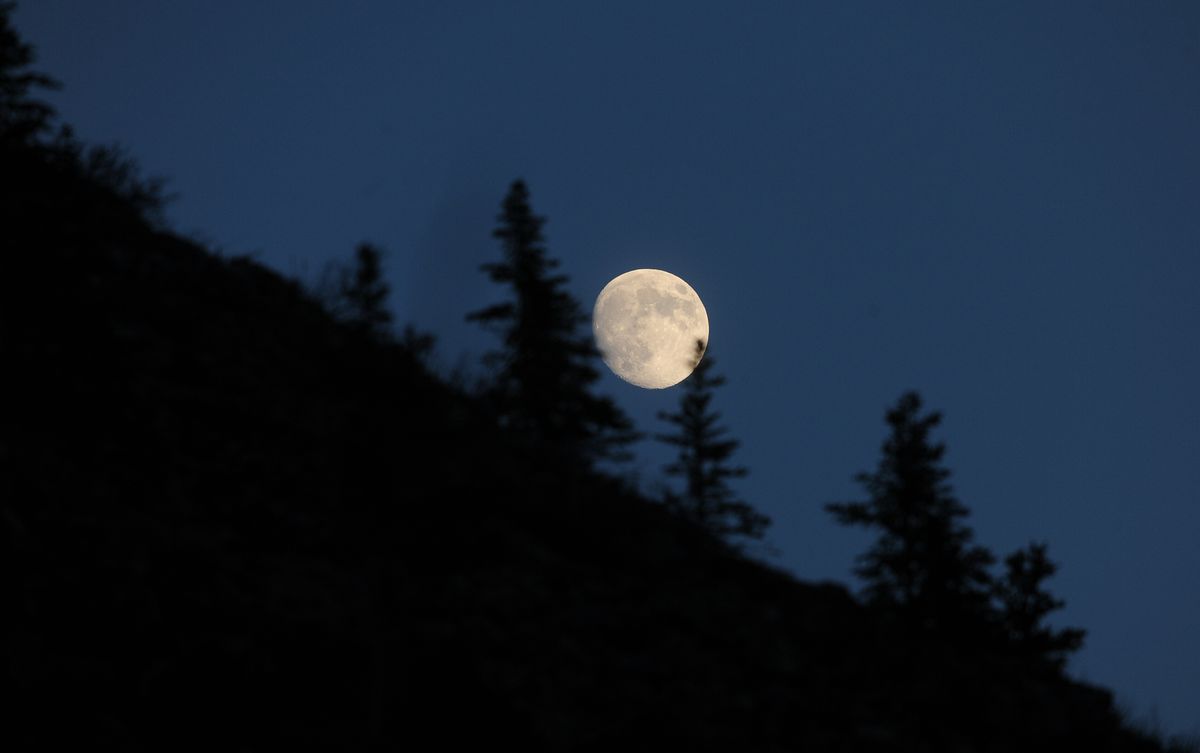 A nearly full moon rises over a ridgeline in Denali National Park and Preserve on Wednesday, May 18, 2016. (Bob Hallinen / ADN archive)

A nearly full moon rises over a ridgeline in Denali National Park and Preserve on Wednesday, May 18, 2016. (Bob Hallinen / ADN archive)

Ever since humans have looked up at the night sky, there have been wild theories about the moon and its power over us. Some - like the idea that it’s made of cheese, or that it has canals and alien life - have been thoroughly debunked, while others still have a wide audience. Nearly 20 million Americans think the moon landing of July 1969 was faked by the U.S. government. Here are five myths that maintain a hold on many people’s imaginations.

Myth No. 1: The race to the moon began after Sputnik shocked America.

Consult nearly any timeline of moon exploration, including NASA’s own online guide, and you’ll see Sputnik referred to as its inciting event. A National Air and Space Museum Web page , “Racing to the Moon,” starts with the satellite’s takeoff: “The Soviet Union stunned the world with the launch of Sputnik.” Space.com also refers to it as “the space race’s opening shot.”

In large part, we have Lyndon Johnson to thank for this. Soon after the Soviet Union launched the world's first satellite in October 1957, then-Sen. Johnson led a series of congressional hearings designed to publicly beat down President Dwight Eisenhower for being caught off guard on an issue of national security.

But the hearings were a master class in Capitol Hill political theater. Though the news may have stunned the general public, shaking their confidence in America's technological superiority, within the government the initial reaction wasn't fear or even surprise. A group of international scientists gathered in Washington on the evening of Sputnik's first flight, and the president of the International Council of Scientific Unions - an American, Lloyd Berkner - even raised a glass to toast the Soviets' success.

Eisenhower’s public response was similarly unfazed. “So far as the satellite itself is concerned,” he said, “that does not raise my apprehensions, not one iota.” A CIA report declassified in 2017 shows that Eisenhower and the U.S. intelligence community had seen several reports that the Soviet satellite launch was imminent and of no military concern. In an interview, former NASA chief historian Roger Launius told me, “Sputnik was not a surprise — not to anybody who was paying attention.”

In fact, the space race was well underway by the time Sputnik went into orbit: The U.S. government had been at work on a similar satellite for several years. A National Security Council memo from 1955 explains that the United States had committed to launching a scientific satellite, because “considerable prestige and psychological benefits [would] accrue to the nation which first is successful.”

Myth No. 2: The moon missions were a source of national unity.

"Moonshot" has become a political cliche. Politicians, pundits, even professors use the word ad nauseam to describe any ambitious national effort that would require overwhelming public support to achieve. Presidential candidates Beto O'Rourke and Kirsten Gillibrand both recently pushed for one that would address climate change. The idea owes to the persistent narrative that the lunar missions had a unique power to heal national divides. A 2018 story in Quartz claimed: "In a country so polarized about so much, it seemed no one disagreed about Apollo 8. Blacks and whites, hippies and octogenarians, rich and poor, urban and rural, Democrats and Republicans, all seemed to agree: Apollo 8 had done something important."

Polling throughout the 1960s showed otherwise. During a decade marked by civil rights protests and the Vietnam War, much of the country was starkly divided over pouring time, effort and funding into a trip to the moon. "It would appear that the fathers of our nation would allow a few thousand hungry people to die for the lack of a few thousand dollars while they would contaminate the moon and its sterility for the sake of 'progress' and spend billions of dollars in the process," said a 1969 editorial in the Los Angeles Sentinel. Throughout the 1960s, the Apollo program "wasn't very popular," says NASA chief historian Bill Barry. "It never really got above a 50 percent approval rating in public opinion polls, except during the week when we landed on the moon."

Myth No. 3: The moon missions did not have much scientific value.

Today, only 64 percent of Americans say the space program is worth the cost. That number, at least, has grown since the question was first asked in 1979, when only 41 percent said it was worthwhile to have spent billions of dollars to, among other things, get a bunch of moon rocks. “In practical terms Apollo 11 was meaningless,” writes Matthew Walther, in an essay for the Week. “ . . . It was a voyage undertaken for no meaningful scientific purpose.” And historian Gerard DeGroot told the Guardian, “The great tragedy of the effort was that the best of American technology and billions of American dollars were devoted to a project of minuscule benefit to anyone.”

Putting aside the technological advances made during the race to the moon (water purification systems, the Dustbuster, rechargeable hearing aids), those lunar rocks have told us an enormous amount about our planet’s evolution. The samples collected on the Apollo missions revealed striking similarities between the composition of moon matter and Earth matter, leading to the “giant impact hypothesis, ” which posits that the moon and Earth were once part of one larger planet before being blown apart by a cosmic collision.

Myth No. 4: The moon controls the tides on Earth.

Humans have long attributed behaviors on Earth to the moon's cosmic pull - lunacy and fertility among them. It's also commonly thought that the moon controls the tides, a claim that shows up everywhere from Boating magazine to a Refinery 29 article about the astrological significance of this month's solar eclipse.

This is an oversimplification. The moon’s gravitational forces are strong enough to exert a pull on the water, creating movement across Earth’s oceans. But the moon is not the only object responsible for the tides — so is the sun — nor is it their biggest influence. The Earth’s geography is a greater determinant of the size and timing of tides than any celestial bodies are. According to the National Oceanic and Atmospheric Administration, terrestrial factors — including the depth of oceans, the size of landmasses and the shape of shorelines — cause tides to behave very differently from location to location. Think of it like this: The moon’s gravitational pull prompts the water to move, but as that water skirts continents and flows from shallow coasts to deep trenches, it triggers ripple effects, creating high and low tides in places and at times that the moon’s position alone cannot predict.

Fifty years ago, the biggest space celebrities were moon mission figures like Buzz Aldrin and Neil Armstrong. Today, entrepreneurs like Elon Musk and Richard Branson are bigger household names than any current NASA astronauts. In 2017, Rolling Stone magazine featured Musk on its cover holding a space helmet, calling him “The architect of tomorrow.” Their efforts to journey to the International Space Station, Mars and elsewhere have led some to wonder whether private companies will also lay claim to lunar exploration. “For these companies, the moon is not the nationalistic dream that it was during the Apollo era,” says the Atlantic. “It is a marketplace.” “The privatization of the moon is coming,” warns an article on Progress.org.

But private companies receive significant funding, support and know-how from the federal government. SpaceX and Boeing have received billions of dollars from NASA and Pentagon contracts. They, along with other players like Blue Origin (owned by Jeff Bezos, who also owns The Washington Post), rely on the government's launchpads at Cape Canaveral for liftoff. NASA also remains the primary training ground for astronauts, and retains the ability to pull resources or shutter private efforts if they don't conform to its standards.

While the nature of public-private partnerships has changed over time, and companies today exert more influence over how NASA operates, even moon missions were never solely a government endeavor. Numerous private companies, including Boeing, Grumman, IBM and Lockheed, had contracts with NASA for the Apollo program. Companies including Omega watches and Fisher pen provided gear for the astronauts. Private vs. public is a false dichotomy.

Lillian Cunningham is the creator and host of the “Presidential” and “Constitutional” podcasts. She was previously a feature writer for and editor of The Washington Post’s On Leadership section, for which she received two Emmy Awards for her interviews with leaders in politics, business and the arts.