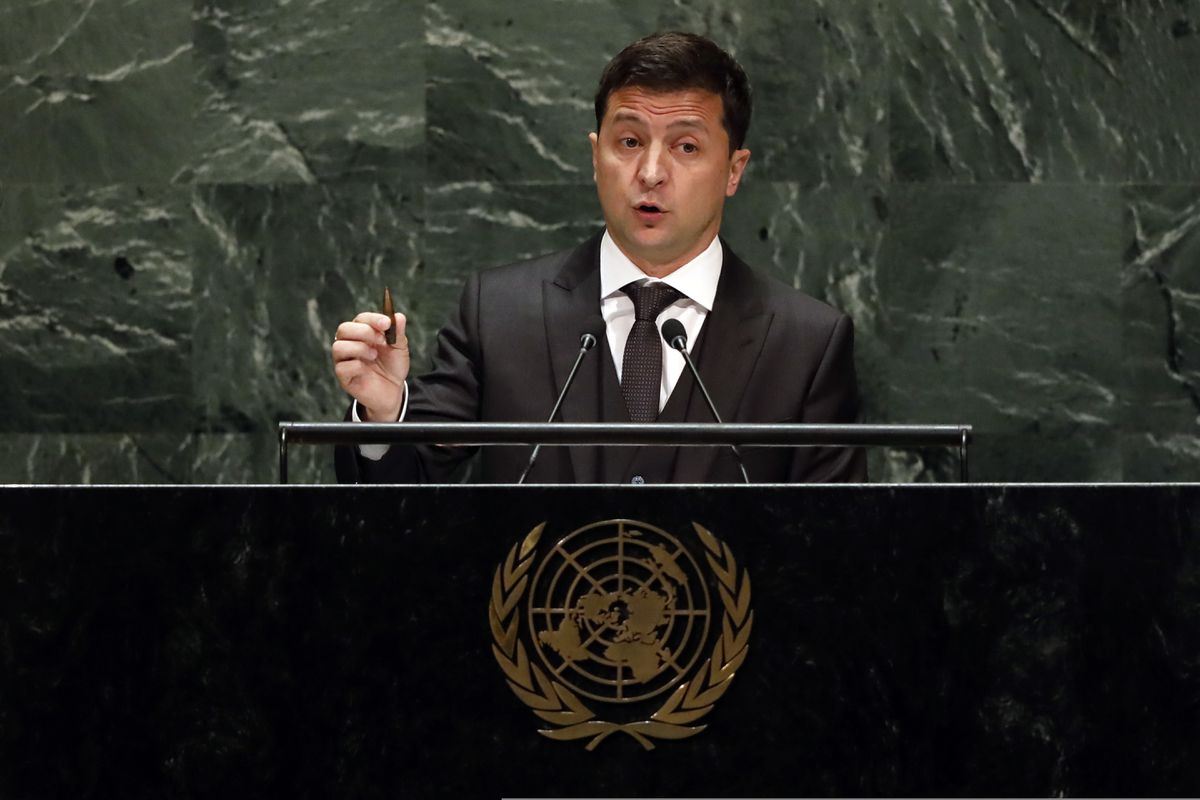 Nina Jankowicz is a fellow at the Wilson Center in Washington. Her first book, “How to Lose the Information War,” will be published next year.

Ukraine has been thrust into the news, but not for its two historic elections this year or developments under its new comedian-turned-president. No, Ukraine is on America’s mind because a whistleblower in the U.S. intelligence community alleged that President Trump pressured Ukrainian President Volodymyr Zelensky to investigate former vice president Joe Biden and may have withheld nearly $400 million in military aid when Zelensky did not. A White House memorandum outlining the leaders’ call shows Zelensky asking for more military aid, to which Trump responds, “I would like you to do us a favor though,” before turning to a possible investigation of his political enemies. As impeachment proceedings over the scandal begin, Ukraine - and misinformation about it - will continue to be a mainstay of the news.

Many Americans - including Trump and his lawyer Rudy Giuliani - regularly call Ukraine by an outdated name: "the Ukraine." CNN's Chris Cuomo also referred to it that way while interrogating Giuliani, opening a line of questioning by asking the former New York mayor, "Did you ask the Ukraine to investigate Joe Biden?"

It is true that the Ukrainian Soviet Socialist Republic was commonly known as “the Ukraine” in English, but even then, the term was a shorthand. The fraught definite article is rooted in a traditional translation choice that has geopolitical implications. In Russian, the word “Ukraina” means “borderlands” and takes the preposition “na.” Using the phrase “na Ukraini” to describe the sovereign nation of Ukraine in Russian is derogatory, akin to saying “in the sticks” in English. It implies that Ukraine is not an independent state but simply a “borderland” on Russia’s outskirts. Ukrainians (and Ukraine’s Russian-speaking supporters elsewhere) use a different preposition when speaking about the country: “v.” The proper English translation of this preferred construction would be “in Ukraine.” But even if you ignore the linguistics, the country’s official name is Ukraine. Leaders, journalists and pundits should use it.

Myth No. 2: Crimeans want to be part of Russia.

In 2014, just after the Sochi Winter Olympics, "little green men" - military personnel without insignia on their green uniforms, later revealed to be Russian troops - rolled into Ukraine's Crimean Peninsula and began wresting control of military installations and administrative resources from local authorities. A few weeks later, Russia organized an unconstitutional referendum to secure the peninsula's new affiliation. Moscow claimed that 97 percent of Crimean voters chose to be incorporated into the Russian Federation rather than maintain the peninsula's autonomous status within Ukraine. Later, during the 2016 presidential campaign, then-candidate Trump told ABC's George Stephanopoulos that "the people of Crimea, from what I've heard, would rather be with Russia than where they were," a claim he has repeated since assuming office.

But the reality of what Crimeans want is not so cut-and-dried. Both the United Nationsand the Organization for Security and Cooperation in Europe condemned the March 2014 referendum as illegitimate. The Kremlin has restricted access to the peninsula since its annexation, making it difficult to assess people’s true sentiments. It has also targeted independent media outlets and imprisoned at least 110 local journalists and activists for their work . Several leaders of the Crimean Tatar ethnic group, which considers the peninsula its ancestral home, are among them.

They are lucky to have their lives; other critics of the annexation have been kidnapped, disappeared or killed . A 2019 report from the U.N. High Commissioner for Human Rights found that Russia carries out “pervasive human rights violations such as restrictions on freedoms of religion, opinion and expression and association, as well as the intimidation and harassment of human rights defenders, disproportionately affecting Crimean Tatars.” Many residents have fled the peninsula since the annexation, contributing to the more than 1.4 million internally displaced people in Ukraine . In short, the Kremlin’s argument that Crimeans “want to be part of Russia” rests on an illegal sham election and the systematic oppression of dissent.

Myth No. 3: Ukraine is fighting a civil war.

The war in Ukraine's eastern Donbas region that has been going on for more than five years and claimed more than 13,000 lives is a confusing one; Russia has purposely made it that way. In addition to its stealthy and illegal annexation of Crimea, the Kremlin secretly funds, outfits and supplies troops to separatists in Eastern Ukraine, so calling the conflict a "civil war" - as Russian-owned British newspaper the Independent has done since the fighting broke out - is incorrect. Global Security Review has similarly described the situation as a "civil war," claiming that it will "remain frozen for the foreseeable future," and the Ukrainian Ministry of Foreign Affairs recently complained after a Hungarian official used the term.

Not only has the Russian government sent its soldiers to fight in Ukraine, as a 2015 investigation by journalist Simon Ostrovsky revealed, but a Russian missile launcher brought down Malaysia Airlines Flight 17 in 2014, killing all 298 aboard. An international probe of the disaster established Moscow's direct military command over the separatists, suggesting that Moscow's role in directing and shaping the conflict is much greater than the Kremlin admits. The Donbas war was started and is perpetuated - through funding, heavy weaponry, supplies and troops - by Russia. It is not a civil war.

Myth No. 4: Ukraine is hopelessly corrupt.

"Why would you give money to a country you think is corrupt?" Trump recently responded when questioned about his administration's decision to delay almost $400 million in military aid to Ukraine. As vice president, Biden told the Ukrainian parliament in 2015, "You cannot name me a single democracy in the world where the cancer of corruption is [more] prevalent" than in Ukraine.

Four years later, corruption remains Ukraine's greatest reform challenge. But the government has also made important progress. It has implemented an online procurement system for government tenders. It has established an online wealth declaration system for all public officials, including the president and prime minister, that is fully transparent and accessible to the public. Ukraine's new parliament voted to strip its members of immunity, which had long protected lawmakers from prosecution for crimes including corruption. And just this past week, Zelensky signed a new law clarifying that the president of Ukraine can, in fact, be impeached. Ukraine still has a long way to go - its court system, in particular, requires serious reform - but the progress since the rejection of the corrupt Yanukovych regime in 2014 is unmistakable.

Myth No. 5: Joe Biden lobbied to fire a prosecutor on behalf of his son.

Trump, Secretary of State Mike Pompeo and Giuliani have all alleged, without evidence, that as vice president, Biden threatened to withhold a $1 billion loan guarantee Ukraine if then-Ukrainian President Petro Poroshenko did not fire a prosecutor investigating corruption in gas company Burisma. Trump alleges that Biden did this to protect Hunter Biden, the vice president's son, who sat on the company's board. According to a White House memo recounting Trump's phone call with Zelensky, Trump told him, "I heard you had a prosecutor who was very good and he was shut down and that's really unfair."Trump goes on to say that Biden "stopped the prosecution."

In reality, Shokin, who had a long record of incompetence, was an impediment to anti-corruption work in Ukraine. The U.S. ambassador to Ukraine in 2015, Geoffrey Pyatt, lambasted Shokin for his office’s role in getting a British investigation into Burisma dismissed. Anti-corruption activists in Ukraine regularly protested Shokin’s behavior. And, along with an international coalition including the European Union that pushed for further anti-corruption reform in Ukraine, Biden lobbied Poroshenko for Shokin’s firing, while also insisting on other anti-corruption reforms the country needed to pursue to continue receiving U.S. aid. Finally, according to Ukrainian officials and anti-corruption activists, the investigation into Burisma had been shelved long before Biden made his request. By lobbying for Shokin’s dismissal, Biden invited more scrutiny of his son, not less. He was pressuring Ukraine to crack down on corruption, not contributing to it.