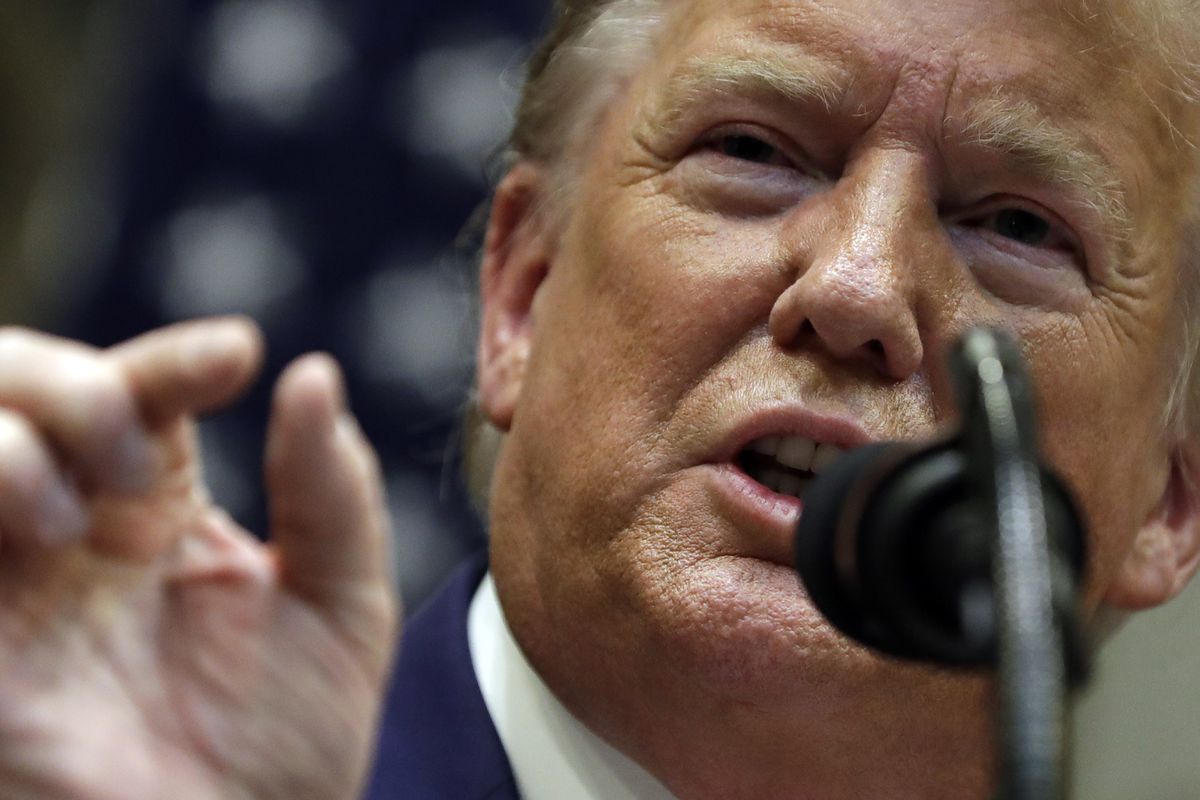 President Donald Trump speaks after a signing ceremony for a trade agreement with Japan in the Roosevelt Room of the White House, Monday, Oct. 7, 2019, in Washington. (AP Photo/Evan Vucci)

President Donald Trump speaks after a signing ceremony for a trade agreement with Japan in the Roosevelt Room of the White House, Monday, Oct. 7, 2019, in Washington. (AP Photo/Evan Vucci)

WASHINGTON -- President Trump’s defense against impeachment is bombastic, full of lies and incoherent to the point of lunacy, which is no surprise. Republicans are beclowning themselves to pretend Trump is making sense -- and that, sadly, is also no surprise.

Trump has described his smoking-gun phone call with Ukrainian President Volodymyr Zelensky as "perfect," which is only true from the point of view of the prosecutors in his impeachment trial, if it comes to that. His lawyer has claimed that Zelensky was the first to mention Joe and Hunter Biden, while the rough transcript of the call clearly shows that it was Trump who did so. He has demanded that the whistleblower be unmasked and claimed that he or she somehow misrepresented the call, hoping no one will notice that the allegations in the whistleblower's complaint have been confirmed by documents and statements released by the White House.

Trump has accused House Intelligence Committee Chairman Adam B. Schiff (D-Calif.) and Speaker Nancy Pelosi (D-Calif.) of “treason” and demanded that they be impeached. After first refusing to say whether he wanted Ukraine to investigate the Bidens, he admitted it and called on China to investigate them, too. And as for Sen. Mitt Romney (R-Utah) — who said that Trump’s call with Zelensky was “troubling in the extreme ” and that his requests to Ukraine and China were “wrong and appalling” — Trump has called him a “pompous ‘ass’ ” and wants him impeached, too.

Romney and Sen. Rob Portman, R-Ohio, however, are the only prominent GOP officeholders thus far to call out Trump for the conduct that will likely get him impeached. Sens. Susan Collins, R-Maine, and Ben Sasse, R-Neb., have been critical of the China appeal but have said nothing about Ukraine. The bootlicking cowardice of today's Republican Party knows no bounds.

Perhaps none has embarrassed himself more than Sen. Ron Johnson (R-Wis.), who had a rough time Sunday on “Meet the Press.” Host Chuck Todd asked him about a quote of his that had appeared in the Wall Street Journal. When Johnson heard that $391 million in military aid for Ukraine might be being withheld to coerce an investigation into the Bidens, Johnson told the Journal, “I winced. My reaction was, ‘Oh God. I don’t want to see those two things combined.’ ”

There it is, the quid pro quo. But Johnson was apparently determined not to be seen as having criticized Trump, lest he become the target of a Trump tweetstorm. So he launched into a diatribe about how Trump's presidency had been "sabotaged" and given "no measure of honeymoon whatsoever" and then dove into fantasy-based conspiracy theories about the origin of the Mueller investigation. After a long struggle by Todd to return to the subject of Ukraine, Johnson finally said: "When I asked the president about that, he completely denied it. He adamantly denied it. He vehemently, angrily denied it. He said, "I'd never do that." So that is the piece of the puzzle I'm here to report today."

Runner-up for some sort of Profiles in Spinelessness award is Sen. Marco Rubio, R-Fla., who said that when Trump stood on the White House lawn and called on the despotic Chinese government, with its kangaroo-court justice system, to investigate a former U.S vice president and his family, he was just kidding around to get a rise out of the media.

Look at the videotape. What I see is a desperate president trying to convince the public that his attempted shakedown of Ukraine was so innocent, so unimpeachable, that he's willing to do the same thing to China openly. Then again, it might have been slam-dunk evidence for another article of impeachment. Either way, Trump's performance looked and sounded nothing like fun and games with the White House press corps.

At this point, we can dispense with the notion that Trump welcomes impeachment because he believes it gives him a political advantage. He reportedly told House Republicans that being impeached would be "a bad thing to have on your resume." His tweets and harangues betray what seems to be a visceral horror of being hauled into the dock and put on trial, even if he believes that ultimately he will not be removed from office. In his long life of privilege, Trump has rarely been held accountable for his bad behavior. He seems not to enjoy the experience.

For now, Trump can cling to the fact that lily-livered Republicans still fear his wrath. They’re looking at the polls, though, and hearing from their constituents. It is certainly true that brute-force intimidation can compel obedience -- but it rarely generates true loyalty.

Marc Thiessen: Joe Biden is a hypocrite on Ukraine

Dana Milbank: Trump’s defense: You can’t impeach me. I impeach you.

Joe Lockhart: I worked in the White House during impeachment. Trump’s team isn’t ready for it.

Eugene Robinson is an opinion columnist for the Washington Post. In a three-decade career at Post, Robinson has been city hall reporter, city editor, foreign correspondent in Buenos Aires and London, foreign editor, and assistant managing editor in charge of the paper’s Style section.