Five myths about the Constitution 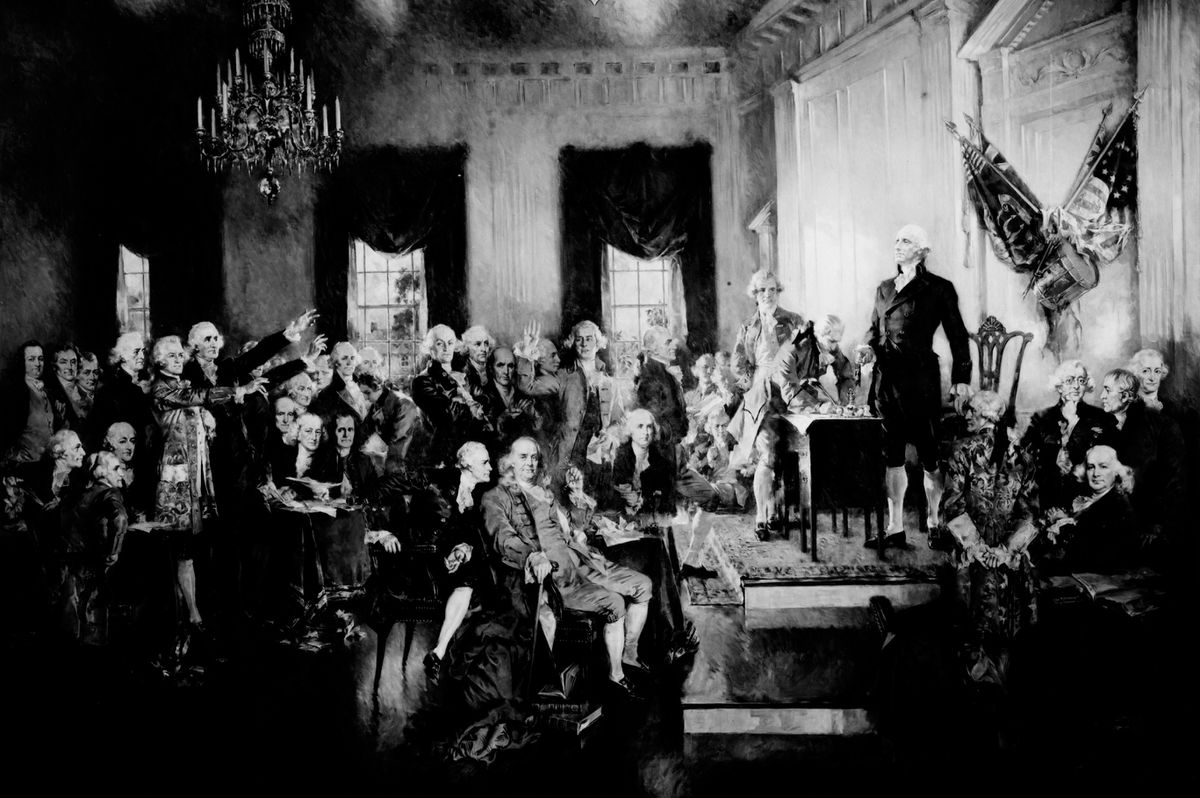 This photo provided by the Library of Congress shows a painting by Howard Chandler Christy of George Washington presiding at the signing of the Constitution of the United States in Philadelphia on Sept. 17, 1787. (Library of Congress via AP)

This photo provided by the Library of Congress shows a painting by Howard Chandler Christy of George Washington presiding at the signing of the Constitution of the United States in Philadelphia on Sept. 17, 1787. (Library of Congress via AP)

Myth No. 1: The First Amendment is first because it’s the most important.

Last month, accepting the Mark Twain Prize for American Humor, comedian Dave Chappelle said, "The First Amendment is first for a reason," adding, wryly, that the "Second Amendment is just in case the first one doesn't work out." The line echoes the widely held view, as Owen Anderson put it in a 2016 Washington Times op-ed, that the "First Amendment is first, not simply because it falls at the beginning of a list of amendments, but because it articulates the first freedom."

Not quite. Certainly, our First Amendment freedoms, including speech and religion, are among the most fundamental liberties protected by the Constitution. But the numerical ordering we wound up with wasn't the original plan. In fact, the First Amendment was originally the Third Amendment. The Bill of Rights that Congress approved in 1789 contained 12 amendments, which were then sent to the states for ratification. The first two - concerning representation in the House and congressional pay - didn't meet the three-fourths ratification requirement and were discarded. As a result, the Third Amendment became the First Amendment simply by being the next in line.

Myth No. 2: ‘Originalism’ is a politically conservative philosophy.

In September, Supreme Court Justice Neil Gorsuch wrote in Time magazine that "Originalism Is the Best Approach to the Constitution," arguing that the originalist school isn't "big C" conservative but "conservative in the small c sense that it seeks to conserve the meaning of the Constitution as it was written." Put another way, originalism teaches that the Constitution's meaning is fixed at the point it was ratified by "We the People." In 2017, describing Gorsuch as a "demonstrated originalist," The Washington Post's Aaron Blake noted: "Among conservatives, that's basically code for 'not an activist judge.' And among liberals, it's basically code for 'conservative.' "

Originalism doesn’t always lead to right-of-center outcomes, though. For example, the landmark Brown v. Board of Education decision was championed by Justice Hugo Black, an originalist, even though it contradicted what one might have expected of his personal politics. Harvard Law School’s Noah Feldman described Black as “the strongest internal voice on the Supreme Court” for ending “separate but equal” racial segregation. Despite being a former Ku Klux Klan member from the Deep South, Black was convinced that “the original meaning of the Fourteenth Amendment and its two Reconstruction-era companions,” the 13th and 15th amendments, required ending this discriminatory regime. Though few now, progressive or conservative, take issue with the holding in Brown, at the time it was a major progressive victory.

Gorsuch himself has highlighted additional instances where originalism leads - or should lead - to outcomes considered left-leaning, such as upholding protesters' right to burn the American flag, preventing the government from putting a GPS tracking device on your car without a warrant or protecting immigrants from being punished according to too-vague laws. Originalist methodology has been employed at one time or another by all nine of the sitting justices. As Justice Elena Kagan noted in her confirmation hearing remarks, "We are all originalists now."

Myth No. 3: The high court has the final say on all constitutional questions.

Former chief justice Charles Evans Hughes once said, "We are under a Constitution, but the Constitution is what the judges say it is." The White House website's entry on the judicial branch states, "Federal courts enjoy the sole power to interpret the law" and "determine the constitutionality of the law." But while the Supreme Court is an arbiter of constitutional meaning, it is not the only, or even the final, one.

Citizens can directly reject the high court's constitutional rulings by amending the Constitution. Americans did just that in 1868, ratifying the 14th Amendment in part to effectively nullify the court's discriminatory decision in Dred Scott v. Sandford, which in essence denied citizenship to African Americans.

The Constitution generally acts as a floor, but not a ceiling, for important rights. And when other government actors believe that constitutional values require greater protection, those officials can usually provide such protections. For example, shortly after being elected president, Thomas Jefferson pardoned everyone who had been convicted under the Alien and Sedition Acts, and Congress paid back the fines these individuals had incurred. President Harry S. Truman signed an executive order desegregating the military six years before the Brown decision. Three years after a controversial Supreme Court ruling that decreased constitutional protections for religious exercise, Congress responded by passing the 1993 Religious Freedom Restoration Act. States can and do interpret their state constitutional provisions to require more protection than similar federal constitutional provisions.

And there are some constitutional questions that the court has said it does not have authority to decide, including political matters in wartime contexts, presidential terminations of treaties or challenges to Congress' impeachment process.

Myth No. 4: The Constitution requires ‘separation of church and state.’

The Freedom From Religion Foundation filed a complaint against Judge Tammy Kemp - who presided in the murder trial of former Dallas police officer Amber Guyger - because, as CNN described it, she "violated the US Constitution's separation of church and state" by "giving Guyger a hug and a Bible following the sentencing." In May, The Post's editorial board argued that " 'Bible literacy' classes in public schools violate separation of church and state."

But it's important to note that the first known use of the phrase "separation between Church & State" was in a letter written by Jefferson in 1802, nearly 15 years after the Constitution was ratified. And the Supreme Court doesn't always rule in this direction. Although the government cannot force citizens to engage in religious activities, the court recently held in a 7-2 decision that the Constitution sometimes requires the state to support religious organizations by providing them equal access to public programs, such as government grants for playgrounds. In the court's most recent case dealing with these issues, the majority ruled again 7-2 that the placement of a 40-foot-tall cross on public property did not violate the establishment clause.

Myth No. 5: Before the 19th Amendment, women couldn’t vote.

Last year, SiriusXM radio host and political strategist Jess McIntosh wrote an article for the Shondaland website about women's suffrage that begins: "Happy birthday, 19th amendment! On August 18 in 1920, about 150 years after the country started up, women were finally granted the right to vote." Encyclopaedia Britannica's online entry for Susan B. Anthony says, "Her work helped pave the way for the Nineteenth Amendment (1920) to the Constitution, giving women the right to vote."

It’s true that the 19th Amendment expressly guaranteed the right of all Americans to vote. But before it was ratified, the Constitution was silent on the question of women’s suffrage. In fact, women did vote in some states and federal territories before the 19th Amendment’s ratification. New Jersey’s first constitution, in 1776, granted voting rights to women and African Americans, though the state disenfranchised both groups in 1807. In 1870, in the Utah Territory, Seraph Young, a grandniece of Brigham Young, became the first woman to legally vote in a federal jurisdiction. In parts of the country where women were denied the franchise, women, including Anthony, cast protest ballots in defiance of the law decades before this right was constitutionally guaranteed.